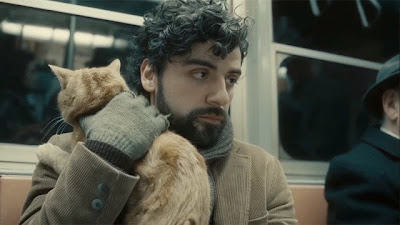 I fully expected to love Inside Llewyn Davis. The fact that I didn’t, that I merely appreciate it and think it’s a well-made movie, makes me feel like something of a bad film geek. Mostly this is because virtually everyone I know who has seen it and every review I have read subsequent my viewing has raved about the film. I admit it’s a well-made film. I like the soundtrack a lot. It strikes me, though, as just another version of A Serious Man, which in my “I’ve seen 11 of the 16 Coen Brothers films” world ranks on the bottom. From what I know of it, I’m guessing that I might well have the same opinion of Barton Fink when I finally get around to it.

By this I mean that there is a strong streak of Kafka running through this film as well as with A Serious Man. There is very much the sense, a sense that the film go to great lengths to provide, that everyone knows what the score is and what is going on with the exception of our main character. There is a great deal of similarity between those main characters. Each is the type who, when told he is responsible for something, takes responsibility for it, whether he should or not. There is a feeling that the world makes sense to everyone but the character with whom we are to empathize. That character lives in a world that cannot be understood, in part because everyone else seems to understand it so well that they find no need to explain it. In truth, Brazil does the same thing.

One of the great things about other languages is that they offer us shades of meaning not possible in our own. There are a variety of words for the luckless and socially awkward in Yiddish. A “schlemiel” is the sort of person who spills a class of red wine on somebody’s shirt. The schlimazel is the victim of the pouring, someone who consistently rolls snake eyes. A nudnik, incidentally, is the sort of social victim who asks what sort of wine it was that got spilled. Llewyn, we soon learn, is very much a schlimazel.

Llewyn Davis (Oscar Isaac) is a recently-made solo folk singer. The reason for his solo status is simple: his partner committed suicide by jumping off a bridge. Llewyn has produced a solo album that is going nowhere, just like he is. He’s unable to afford his own place to live, instead crashing on the couch of whomever will put up with him for a night or two. He can’t even afford a winter coat. When leaving the apartment of one of his patrons-for-the-night, the cat gets out. A recurrent theme of the film is Llewyn dealing with, chasing, or otherwise occupied with a cat that isn’t his.

Evidence of Llewyn’s schlimazel nature happens right away when he encounters a folk duo called Jim (Justin Timberlake) and Jean (Carey Mulligan). Jean has nothing nice to say about Llewyn because she and Llewyn have been recent sex partners despite her marriage to Jim. And now she is pregnant and worried that the baby might be Llewyn’s. Thus, she wants an abortion and demands that Llewyn pay for it. He does, by performing on a novelty record written by Jim and foregoing any potentially massive royalties in exchange for a simple cash payment.

Fed up with the New York folk scene, Llewyn shares a ride to Chicago with an almost silent poet (Garrett Hedlund) and an abusive and abrasive heroin addict/jazz performer named Roland Turner (John Goodman). Through no fault of Llewyn’s, the poet is arrested with the car keys, forcing Llewyn to hitchhike the rest of the way. Once in Chicago, he has a disappointing audition for a promoter (F. Murray Abraham), is told that he should join back up with his now-dead partner, and he retreats to New York, where he is eventually beaten up outside a club.

There’s a streak of nihilism running through this film, which feels like a natural adjunct to the Kafkaesque nature of the character. This is less a film with a coherent plot than it is a character study of Llewyn himself.

The main differences between this film and A Serious Man are that Llewyn Davis is a difficult person to like. We do feel sorry for his constant problems, but we also learn through the film that at least some of them are caused by his own abrasive personality and persecution complex. He doesn’t ask for everything that happens to him, but some of it is earned. This also has a substantially better soundtrack than A Serious Man.

Ultimately, I can’t say I liked this film a lot. I respect it for what it is, and I like most or all of the performances. Oscar Isaac can rightfully wonder if some of Llewyn Davis’s constant misfortune rubbed off on him when he was snubbed a Best Actor nomination at the 2013 Oscars. But while I can respect the quality of the filmmaking here, of the music, even of the writing, I can’t bring myself to say this is a film I will treasure watching again. Personalities like that of Llewyn Davis don’t bore me, but they tire me out, and I’m not sure I’m willing to spend this time with him again.

Why to watch Inside Llewyn Davis: Black comic Coens and a great soundtrack.
Why not to watch: It’s A Serious Man with music.