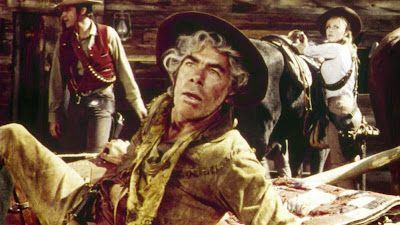 If you put a six-shooter to my head and asked me to rank various genres based on how much I enjoy them, musicals and Westerns would both rank near the bottom and comedies (since so many really aren’t that funny) would probably not rank in the top half. With Cat Ballou, we have a comedy Western with significant musical breaks, which would put this on a list of films that shouldn’t particularly appeal to me. Fortunately, Cat Ballou is surprisingly fun because as goofy as it is, the whole thing works in its own strange way.

We start with a song performed by Stubby Kaye and Nat King Cole. These two appear regularly throughout the film as a sort of Greek chorus to tell us what is going on and what has happened to connect the scene we just saw to the scene we’re about to see. What they tell us is that Catherine “Cat” Ballou (Jane Fonda) is about to be hanged for murdering a man. The rest of the film, then, is flashback until the final couple of minutes.

As the story begins, Cat has just finished her education and is returning home to be a school teacher. However, there is trouble on the train. Among the passengers is Clay Boone (Michael Callan), a man with a price on his head. Cat is seated next to a drunken preacher named Jed (Dwayne Hickman), who is actually not a preacher, but Clay’s uncle. Jed springs Clay free and Clay, attracted to Cat, hides in her berth until the coast is clear.

Once home, Cat discovers that there is a trouble on her father’s ranch. Frankie Ballou (John Marley) runs a ranch outside of Wolf City, Wyoming, but a development company wants his land and will do anything to get him off of it. The company has gone as far as to hire a killer named Tim Strawn (Lee Marvin) to act as muscle. Strawn is a legendary tough guy, most notable for his metallic prosthetic nose, his actual nose having been bitten off in a fight. The only person around willing to help Frankie Ballou is Jackson Two-Bears (Tom Nardini), who is loyal to Frankie. As a native, Jackson is routinely despised in the area, and only Frankie was willing to hire him.

As it happens, both Clay and Jed arrive to thank Cat, who asks them to protect her father. While the two outlaws (both with a price on their respective heads) pack guns, neither has ever shot a man, so Cat decides to hire out for her own muscle. She gets Kid Shelleen (also Lee Marvin), who turns out to be a drunk who literally can’t hit the side of a barn with a bullet unless he’s plastered, when he suddenly becomes a terrific shot. When Tim Strawn kills Frankie Ballou, Cat loses the ranch and goes outlaw with her new gang: Jackson, Clay, Jed, and Kid Shelleen.

It wouldn’t be a film from the era without something like a love story, which means we’re going to cobble in a romance here. And, since this is a comedy, it’s a love triangle. Clay is attracted to Cat, Cat decides she’s in love with Clay, and Kid Shelleen realizes he has feelings for Cat as well and sobers up so that he can protect her. And eventually, we get back to Cat being in a jail cell and preparing to be hanged. Since this is a comedy, though, it’s a safe bet that somehow she’ll manage to get away in the end.

Lee Marvin won the 1965 Best Actor Oscar for this role and I’m not entirely sure how. Don’t get me wrong here; I really like Lee Marvin a lot. He’s a classic tough guy and I tend to like him in every movie I see him in. In fact, I like him quite a bit in this, despite the fact that some of his best scenes were almost certainly done by a stuntman. But this is a fluff role in a lot of respects, and it’s almost as if Marvin won the Oscar for a role that was really more of a supporting performance. Sure, it’s a double role, but he has maybe a dozen lines as Tim Strawn, and in the ultimate showdown between Strawn and Shelleen, Strawn is quite clearly played by a different actor.

Jane Fonda is fine here, but the role could have been played by just about anybody with a pretty face. There’s not really anything notable about her, which might be the reason Lee Marvin was nominated in the first place; he’s the clearest standout in the cast list. A close second, though, is Tom Nardini, who is absolutely great as Jackson Two-Bears, and is one of my favorite things about the film.

There are some real high points. Cat’s discovery that Jed and Clay have tracked her down comes at a square dance. This scene is done in a single take in large part with very intricate choreography, both physically and in the script. As the dancers move through the various square dance calls, Cat ends up dancing with Jackson, her father, Clay, and Jed, having conversations with each of them that stop and start depending on who she is paired with at any moment. It’s impressively done and must have been rehearsed to death.

The truth is, though, that Cat Ballou is never going to be considered one of the great Westerns of all time or, probably, its own decade. It’s a goof with wacky characters and it’s darker than I expected in places. Evidently the book upon which it was based is not a comedy at all, but played straight. I can see how this could be made into a serious drama, which begs the question as to why it was adapted as fairly broad comedy.

Cat Ballou is fun, but it’s ultimately an empty fun. I like the characters well enough and love the cast, but it just feels like there’s some heart missing here, like there should be better reasons for things to happen as they do.

Why to watch Cat Ballou: A completely new take on Westerns, at least until Blazing Saddles.
Why not to watch: It should hang together better than it does.