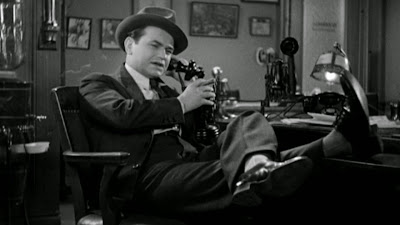 Sometimes I think it’s a shame that Edward G. Robinson made the movie Little Caesar. No matter how often I see him in something, my first thought when I know he’s going to be in something is of that character. It’s not fair to Robinson, who was a hell of a good actor and better than most of us remember. So, when a film like Five Star Final shows up, it’s unfair for me to think he’s going to be a gangster.

Then again, in Five Star Final, he plays something akin to a gangster. He plays Randall, the managing editor of a trashy New York City newspaper. Circulation is falling for the paper (slightly), and the owner Hinchecliffe (Oscar Apfel) is concerned. His decision is to make the paper a paragon of moral virtue by essentially doing prurient stories about the terrible crimes and placing the angle on the moral failings of the people involved. To get things going, he decides to reopen a murder case from 20 years earlier. A stenographer named Nancy Voorhees (Frances Starr) killed her boss, who had gotten her pregnant and then refused to marry her.

To get the story on Nancy Voorhees, who vanished almost immediately after she was acquitted, he puts two people on the case. The first is a new reporter (Ona Munson) who was mostly hired for her looks rather than anything else. The second is an imposing gentleman named Isopod (Boris Karloff), who, after discovering what happened to Nancy Voorhees, gets entry into their home by pretending to be a minister.

As it happens, Nancy Voorhees married a man named Michael Townsend (H.B. Warner) and did her best to forget her past. Jenny (Marian Marsh), the daughter from the illicit affair 20 years earlier, is now on the eve of getting married to Phillip Weeks (Anthony Bushell), the son of a manufacturing family. Isopod gets his story and the paper runs with it, reopening a lot of old wounds (and selling a lot of papers in the process). The terrible strain of the story causes all sorts of problems for the Townsends and eventually leads to the suicide of Nancy Townsend, followed by that of Michael Townsend.

Naturally, this sends poor Jenny Townsend into a rage that leads to the film’s dramatic conclusion and in a way, the redemption of Randall and his secretary Miss Taylor (Aline MacMahon), who has been secretly in love with him for years.

The biggest problem with a film like Five Star Final is that it so telegraphs where it’s going that for a modern audience, we know what’s going to happen well before it does. We learn early in the film that the paper is going to reopen the Voorhees story. Then we switch to the Townsend home, see Nancy Voorhees Townsend and her family. We’re told directly by Nancy Voorhees Townsend that she hopes her past doesn’t reopen and she doesn’t know how she’d handle Jenny finding out Michael isn’t her father. We know it’s going to happen. It has to happen. But what passes for creating pathos in 1931 seems ham-handed today because it kind of is.

Well, there’s that and a great deal of the acting. One of the ways to know that Edward G. Robinson really was as good an actor as I claimed in the first paragraph is to compare him with a number of the other players here. In particular, Anthony Bushell as Phillip Weeks overacts like he got paid for every vocal inflection and arm gesture. Robinson is capable of a subtlety that virtually no one else in the film is, with the exception of Aline McMahon, who is a joy to watch perform. And, of course, Karloff, who was always great even when the movie wasn’t.

The screenplay is perhaps too on the nose for today’s audience as well. Randall, who may well be a muckraker, is also a good guy. So the script gives him a quirk: he washes his hands a lot, and even has a sink in his office where he can wash his hands every time he does something that’s seedy. The film is smart enough not to overdo it, though. We only see him washing his hands a couple of times.

But this is very much played for the deep dive into emotional territory and prurience. Why else would Nancy kill herself on the day of her daughter’s wedding? I mean, really? And then dad caps himself on the same day? What sort of parents would do that to their daughter, particularly one suddenly embroiled in a scandal not of her own making? I’m sure this played as tragic when the film was released, but the dramatic irony of Jenny dancing to music on the radio, not knowing that her mother is lying dead in the next room seems so forced on a more modern audience.

Nonetheless Five Star Final is interesting for a few of the performances and the not-so-subtle message it tries to offer. But it’s all about Edward G. Robinson for me and the fact that films like this one, even in the pre-Code days, presaged the film noir style that would soon take over.

Why to watch Five Star Final: Proof that Edward G. Robinson was more than just a hard-assed gangster.
Why not to watch: A punch in the face would be more subtle.