The Contenders:
The Big Chill
The Dresser
The Right Stuff
Tender Mercies
Terms of Endearment (winner) 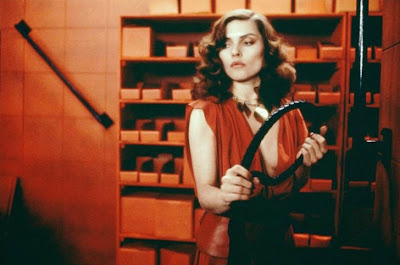 A spin through the top 10 grossing films of 1983 reveals only one of the five nominees. Movies that were passed over from this illustrious money-making group include Return of the Jedi, Trading Places, WarGames, and Risky Business, and I can make a case for a few of these. Some may suggest Scarface, although that wouldn’t make my list. Once Upon a Time in America might, though. Local Hero is a better film than people remember. So is The King of Comedy, but that one might be too dark, while A Christmas Story is probably too light. From foreign shores we got The Ballad of Narayama, and Fanny and Alexander, both of which I could see nominated, and I’m mildly surprised El Norte didn’t get a nod. In the “no way it gets a nomination, but I love it” category, we get Monty Python’s Meaning of Life and Videodrome.

5: I hate The Big Chill. While this film might be important and relevant to my older siblings, who are the people it was made for, I have nothing good to say about it. A bunch of whiney, self-obsessed thirty-somethings go hang out at a funeral for one of their loser friends and complain constantly that their lives aren’t perfect and wonderful at all times. It’s navel-gazing Baby Boomer “what about my needs?” bullshit and I hate that it even exists.

4: When I reviewed Terms of Endearment, I called it a very good and well-made movie that simply wasn’t made for me. This was a hard watch for yours truly not because it’s a bad movie, but because it was so obviously not made for someone of my sensibilities to watch. The performances are good, and even the story can be construed as interesting. But I sort of don’t care about a middle-aged woman’s neuroses and I cringe at the thought of Jack Nicholson wearing pastel shirts.

3: The biggest problem with The Dresser is that the story isn’t big enough. It contains two of the great acting performances of the decade from Albert Finney and Tom Courtenay and is absolutely worth seeing for them. But the story itself feels too intimate and small, not greand enough to command the sort of awe and wonder of something nominated for Best Picture. It’s a hell of a movie; it’s just that two great performances aren’t enough to pull it into that rarified atmosphere.

2: No one was more surprised than I that I liked Tender Mercies as much as I did. But in the end, I have the same problems with it that I do with The Dresser. While there’s a lot going on here, this is a sedate film that ends up being little more than a character study of the Robert Duvall character. This was a great year for actor performances, because Duvall’s work joins that of Finney and Courtenay for great male performances of the decade. But again, it just doesn’t feel like enough for the top prize.

1: Given the five choices, I’m going with The Right Stuff. Sure, that’s in part a sentimental pick on my part because I’m a space science junkie. Probably a third of the for pleasure reading I do is on one aspect or another of the space program or cosmology. This is a film with a great cast and tells a grand and sweeping story made better by the fact that it’s a true one. If you can watch this and come away not inspired by what these people did, or at least with how totally badass Chuck Yeager was, I feel sorry for you. I can think of other films I might want to nominate for this award, but The Right Stuff would still get my vote. Yes, even over Return of the Jedi.

Email ThisBlogThis!Share to TwitterShare to FacebookShare to Pinterest
Labels: 1983, Best Picture, Oscar Got It Wrong, Tender Mercies, Terms of Endearment, The Big Chill, The Dresser, The Right Stuff