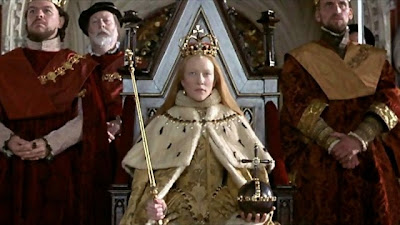 There are some interesting and weird coincidences when you look at the Oscars in a given year. For instance, both The Devil and Daniel Webster and The Devil and Miss Jones were nominated in the same year. Similarly, two of the Best Picture nominees from 1998 involve Queen Elizabeth I as a character. Judy Dench won an Oscar for her portrayal in Shakespeare in Love and Cate Blanchett was nominated for the title role in Elizabeth. It’s one of those things that strikes me as odd.

Elizabeth, for a film that is essentially about 400-year-old political maneuverings, is surprisingly engaging. It’s also wildly historically inaccurate, evidently. I admit that my personal knowledge of various claimants to the English throne in the middle of the 16th century. I’m not going to go into the reality here; I’m going to instead stick with the film as it is presented to us. The situation at the start is that Mary I (Kathy Burke) sits on the throne but has no heir, leaving Elizabeth (Cate Blanchett) as the next in line. The problem is that Mary is fiercely Catholic and demands that all of her subjects submit to the Catholic Church but Elizabeth is a Protestant, making her and anyone who supports her is a heretic.

When Mary dies, Elizabeth becomes queen and is immediately the source of any number of suitors; with the throne comes not only power but the opportunity to consolidate power. Primary among these suitors is Henry (Vincent Cassel), who will eventually be the Henry III of France. Uninterested in such matches, Elizabeth instead favors Robert Dudley (Joseph Fiennes). The affair between the two of them is the worst-kept secret in England.

But marriage possibilities are the least of Elizabeth’s worries. There are constant plots afoot to assassinate her. The main conspirators against her come in the form of the Duke of Norfolk (Christoper Eccleston) and Mary of Guise (Fanny Ardant), who has been amassing French troops in Scotland as a precursor to invasion.

The turn in the film comes when Elizabeth learns that Dudley is actually a married man, and thus not marriageable and completely unsuited even as a consort. She banishes him from her presence, and this marks a change in her. She essentially stops being a romantically-inclined little girl and becomes someone far tougher and less sentimental. That lack of sentiment gives her the strength to order her main advisor Francis Walsingham (Geoffrey Rush) to hunt down various conspirators, including the Duke of Norfolk and Mary of Guise, and execute them. And this is roughly where the film ends; Elizabeth on the throne, many of the threats against her eliminated, and her conviction to remain unmarried except, in her own words, to England.

It is, of course, Cate Blanchett who is the main focus here, and this is as it should be. I’m of the opinion that she is pretty much always worth watching, and when she is front and center, there’s no good reason not to spend time with the film. Her transformation is the most interesting part of the film as well. By the end of the film she is approving acts—either demanding them or giving tacit approval to them—that she couldn’t have conceived of at the beginning of the film.

What’s interesting to me here is that Elizabeth seems to be interesting almost in spite of itself. It is a film of little more than constant intrigue and the personal growth and change of a particular character and virtually nothing else. And yet the whole thing works. My contention is that it works primarily because of the performances of those involved. While Blanchett is fantastic here, so too are Geoffrey Rush and Christopher Eccleston among others. I ended up liking this film a great deal, although I’m not sure I’d want to watch it again soon. 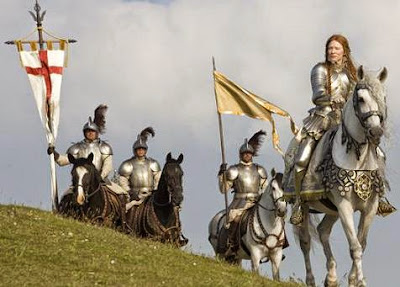 Elizabeth: The Golden Age takes place further into Elizabeth’s reign and is, while still about Elizabeth, more the story of the fate of the Spanish Armada and Elizabeth’s continued struggle to maintain her rule of England. What is surprising is not the differences between the two films (and there are some major ones), but the significant similarities. While the first film ends with Elizabeth apparently secure on the throne, we learn soon enough that many of those same issues are still plaguing her rule.

In this case, her main adversary is Phillip II of Spain (Jordi Molla), ruler of the most powerful country in Europe at the time. Catholic and fearing a threat from Protestant England, Phillip begins plotting against Elizabeth’s rule. Central to his plot is Mary, Queen of Scots (Samantha Morton), who is Elizabeth’s cousin, the next in line of succession, and a Catholic. Her Catholicism and suspected plots against Elizabeth have Mary under house arrest, but there is a great deal of scheming to assassinate Elizabeth and put Mary on the throne.

Tensions, thus, are high between Elizabeth and the representatives of Spain in her court. These tensions increase dramatically with the arrival of Walter Raleigh (Clive Owen), a known pirate who has explored swaths of the New World and has gotten wealthy on the plunder of Spanish ships. Elizabeth finds herself attracted to Raleigh, as does her favorite lady-in-waiting, Bess Throckmorton (Abbie Cornish). For his sake, Raleigh finds himself attracted to both women, but also discovers that Bess is far more accessible. This is despite the fact that Bess is unable to have any sort of relationship with a man without Elizabeth’s blessing, and when Bess eventually turns up pregnant, trouble ensues.

While a good portion of the film concerns this romantic entanglement, the bulk is really about the plots against Elizabeth’s rule and against her life. While directed by Phillip at least in theory, the main attack is masterminded by Robert Reston (Rhys Ifans) and culminates in a direct attack on Elizabeth with what turns out to be an unloaded pistol. The upshot of this is the execution of Mary, Queen of Scots at the direction of Francis Walsingham (still played by Geoffrey Rush), which leads to a furthering of other plots against her, including the desire to put Phillip II’s daughter on the English throne.

The film culminates in the attack on England by the Spanish Armada, which gets surprisingly short shrift in a film that builds up to it. The battles are good, but only last for a couple of minutes before the film comes to a satisfactory close with Elizabeth still sitting on the throne and the power of Spain broken.

In general, Elizabeth: The Golden Age is considered the lesser of the two films, and while there’s certainly quite a bit more happening on screen throughout, I understand why it is considered such. Rather than being tightly created and loaded with intrigue, the film tends to slip into the melodramatic at times, including signs and portents that seem viable only in a world with actual fantasy elements. We get, essentially, magical moments of prophecy or confirmation of same. Elizabeth’s spiritual advisor John Dee (David Threlfall, most notable to me for being the guy who looks exactly like Neil Young in Master and Commander) reads astrological charts and effectively predicts a good chunk of the end of the movie, for instance. There’s simply too much of the air of destiny here to make it feel like anything other than an attempt at legend making.

Both films are blessed with both sets and costuming that is a wonder to see. In fact, even if the movies weren’t that good (and both are at least watchable, the first being moreso), they would be worth seeing just for the elaborate dresses and wigs Cate Blanchett wears throughout. It’s impressive work, and both films deservedly got nominations for costume design, the second one winning.

As with Elizabeth, though, I’m not sure Elizabeth: The Golden Age is a film that I’m keen to see again time soon. My lack of specific knowledge of the time notwithstanding, the vast historical inaccuracies do bother me, because film has a way of becoming “fact” for people in general. Cutting a large swath through history for the sake of narrative seems like a poor excuse for rewriting important world events.

Why to watch Elizabeth: Because it’s impossible to tire of Cate Blanchett.
Why not to watch: Loads of historical inaccuracies.

Why to watch Elizabeth: The Golden Age: It’s still Cate Blanchett, and there’s a whole naval battle to look forward to.
Why not to watch: At least as many inaccuracies as the first movie, and possibly more.