A Horse is a Horse, of Course of Course 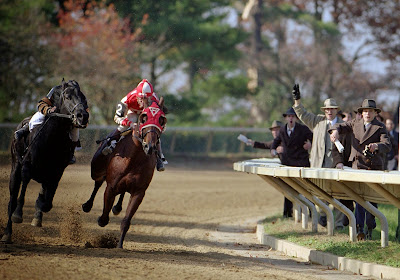 I don’t know if I’ve ever mentioned it here, but I’m mildly terrified of horses. That might be overstating it. I’m just more comfortable with horses the farther I am away from them. In the distance, horses are beautiful, but up close, they are large, strong, and have giant heads and big teeth. They’re a lot stronger than I am, so I don’t really trust them much. So I might be slightly biased against a film about a horse. But that’s what we’re in for with Seabiscuit. It’s worth noting, though, that the film gains points because of what they call the horse. Throughout, those who know the horse call him “Biscuit,” which happens to be what I’ve called one of my girls since she was barely old enough to walk.

While Seabiscuit is very much the story of a horse, it’s more the story of the three men most concerned with the horse: the owner, the trainer, and the jockey. It’s an underdog story that occurs during the Great Depression, which makes the story something of an allegory for the country at the time. The film starts by introducing us to the three men and their own struggles, leaving the horse out of it until we know the men.

The first of these is Charles Howard (Jeff Bridges), who almost by accident becomes one of the biggest car dealers on the West Coast before the crash. His life is turned upside down when his son is killed in a car accident, an event that leads to the estrangement of his wife and a long depression. The second is Tom Smith (Chris Cooper), a horse trainer turned drifter who is convinced that he can find value in the horses he works with. The third is Red Pollard (Tobey Maguire), abandoned by his family after the crash. Pollard is a mildly successful jockey who attempts to supplement his income with boxing matches that leave him beaten and blind in his right eye.

Enter Seabiscuit, a horse with a great pedigree and nothing else going for him. Too small to be considered much of a race horse, Seabiscuit ended up being used as a partner to other horses, trained to lose to boost the confidence of the other animals. Smith sees something in the horse, though, and pushes Howard to acquire him, which Howard does for an obscenely low price. The feistiness of the animal matches Pollard’s pugnacity, and so the two are paired together. Slowly, the team works to build up the horse’s confidence and learn how to win, and win is what Seabiscuit does.

Much of the second half of the movie is pitched around a single race. While Seabiscuit became a national sensation, a little horse that just kept winning, the true great horse of the time was War Admiral, a triple-crown winner and a legend in the making. Howard does everything he can to entice War Admiral’s owner (Eddie Jones) into a match race, pitting the best horse on the East Coast against the best horse in the West. And eventually, this is exactly what happens. But, of course, in trying to help out a friend unrelated to Seabiscuit, Pollard is injured and unable to race against War Admiral. Even if this is truly how the story happened, it’s a known quantity that the minute Pollard agrees to help out a former boss by riding his horse, something bad is going to happen; otherwise, why even bring it up?

That really is the biggest problem with Seabiscuit. In fact, Pollard was injured prior to the match race, and an old friend and rival named George Woolf (Gary Stevens) did ride Seabiscuit in the match race. But Pollard was injured riding another of Howard’s horses, not in trying to help someone else sell a horse. It’s a strange break with reality, but ultimately an unimportant one, since the bones of the real story are here.

That brings up the biggest issue, though. We’re so used to the Hollywood story that when the real thing happens, our first instinct is to not believe that it’s true. What we’re presented with here is true enough; even the epilogue with the horse being injured and eventually returning to racing with a recovered Pollard on his back is true enough. But it feels phony.

Despite this, Seabiscuit is a good film. It’s well-made and beautifully filmed, and the horse racing footage is pretty good. It comes off as maudlin though, even when it shouldn’t. It also seems too long, or like something more should happen in it.

Strangely, perhaps, the film it reminds me of the most is Chariots of Fire. It must be all the running, but it’s also the pace. Seabiscuit, for all of the horse’s speed on the track, is too slow and leisurely about getting where it wants to go. A good cast helps, and it’s another reminder that Chris Cooper is far too underrated and unknown. There’s also a nice role for William H. Macy here as a radio broadcaster, With everything it gets right, though, it seems mildly ironic that it’s the pace that keeps it from being truly great.

Why to watch Seabiscuit: It’s inspirational in a way that seems like it’s honest.
Why not to watch: Even if the dramatic beats are real, they feel staged.