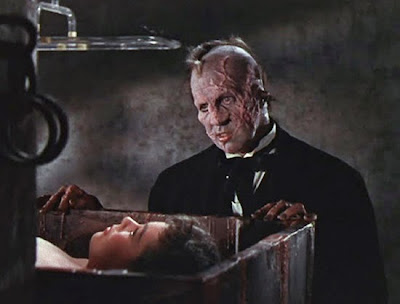 There’s a suspicion among some that NetFlix is attempting to move more and more people to streaming because the disc service is a cash loser, or at least not much of a cash cow. It does seem more and more that every month or so, films on my queue slip into longer and longer wait categories and one or two per month slide down into being no longer available. That’s not terribly surprising for certain films, but when the film is the 1953 House of Wax, the first horror role for Vincent Price, I start to get suspicious. This is not a film that should become unavailable on NetFlix, but it has. So when it showed up on Turner Classic Movies on Halloween, I recorded it.

House of Wax is one of those special movies that, like a lot of the great Vincent Price stuff, is like a roller coaster ride. It’s not really scary, but fun-scary. We know we’re not going to see anything too terrible or awful. It’s going to be pretty gothic and likely have something like torture scenes. There will be a couple of murders, and in the end the bad guys will be killed or detained and the good guys will come out on top.

As a historical note, House of Wax was the film that turned Vincent Price into a horror movie legend. It’s also the biggest box office 3D hit for Warner Brothers in the era, and was the biggest 3D hit for the 1950s, if my information is correct. So in addition to being spooky gothic fun, there’s some historical interest here as well.

Professor Henry Jarrod (Vincent Price) is a wax sculptor who has created a wax museum with his financier Matthew Burke (Roy Roberts). But the museum isn’t drawing huge crowds because Jarrod is more concerned with creating beauty than he is with making prurient exhibits to draw in the fans. Burke wants out, and wants to sell his share of the museum to a notable art critic named Sidney Wallace (Paul Cavanagh). Wallace is interested, but is leaving for a three-month trip. Burke doesn’t want to wait, so he sets a fire in the museum to collect the insurance money. Jarrod tries to save his creations, particularly his statue of Marie Antoinette, but is caught in the fire and presumed dead.

Shortly thereafter, when Burke has collected the insurance money, he is alleged to have hanged himself in his apartment building. However, we see the truth—he’s murdered by a badly disfigured man with a terrible limp. It’s not a hard guess that the disfigured man is Henry Jarrod. This is one of several unsolved murders, including that of Burke’s fiancée, Cathy Gray (Carolyn Jones), who is not only strangled to death, but whose body disappears from the morgue.

And who should be opening a new wax museum but Henry Jarrod, who publically reveals that he survived the fire, despite being badly injured and no longer able to work in wax. He has assistants now, a drunk named Leon Averill (Nedrick Young) and a deaf-mute named Igor (Charles Bronson under a lot of makeup). When Sue Allen (Phyllis Kirk), who was Cathy Gray’s roommate, takes a tour through the museum and sees the Joan of Arc statue looking incredibly like her dead roommate, she starts to get suspicious.

And again, it’s not a masterstroke of deduction to figure out what is going on. Unable to work properly with his burned hands, Jarrod is killing people (sometimes, like with Burke, for revenge and other times just because), covering the bodies in wax, and displaying them in his museum. So, of course, under the wax on Joan of Arc is the missing body of Cathy Gray. While terrible for Sue Allen, it is worse that she greatly resembles the statue of Jarrod’s lost Marie Antoinette, which naturally puts her in mortal danger of being the centerpiece for Jarrod’s new collection.

Believe me, I haven’t given away any spoiler material here. Anyone watching this won’t be surprised by any of the big reveals that happen. Anyone who has seen a movie at all, and particularly something that qualifies as even sort of a thriller can see where this is going long before it gets there. We’re not explicitly told that Jarrod is covering real bodies in wax, but we know he is long before it’s revealed.

And you know what? That’s okay. This is, again, a roller coaster ride and nothing more. It’s not really intended to be the sort of thing that gives someone nightmares. It’s a fun film, a little creepy and that’s it. Vincent Price is perfect, of course, because he’s Vincent Goddam Price. This isn’t something that’s going to win a bunch of awards for plot or acting, but it’s a great way to spend so time in front of a screen. These days, watched as it normally would be, it’s fun to see where the 3D effects would have been included throughout; the transfer back to 2D is damn good.

For a laugh, the director, Andre de Toth, was blind in one eye and couldn’t see the 3D effects. That’s actually kind of awesome.

Anyway, House of Wax is a fun piece of film history. It’s entertaining and silly, and just scary enough to be a great time without making anyone terribly upset.

Why to watch House of Wax: Because it’s Vincent Price’s first horror film.
Why not to watch: It’s not scary. It’s fun, but it’s not scary.

Posted by SJHoneywell at 7:31 PM