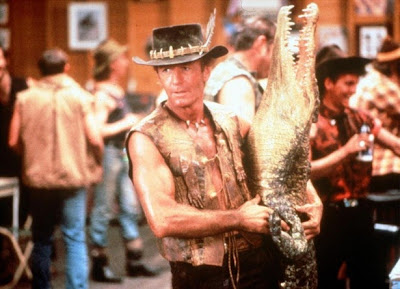 I own a copy of Crocodile Dundee, but it’s currently streaming on NetFlix. It was easier to just watch the stream than hook up the BluRay player and insert the disc and deal with all of that. I was in the mood for something light and simple today, something I knew and would be happy to watch. Crocodile Dundee fit the bill across the board. This is a little pastry of a story, light and fun and entertaining all the way through. It’s a film I know I like, and after the past week in the real world, I wanted something I knew that I liked.

Sue Charlton (Linda Kozlowski) is a reporter for a New York paper currently on assignment in Australia. She’s prepared to come home, but she wants to track down one last story, that of a man named Michael J. Dundee, who was alleged to have had his legs bitten off by a crocodile and then crawled across 100 miles of outback to return home. Seeing a solid human interest angle, she contacts Dundee’s business partner, Wally Reilly (John Meillon) about arranging a meeting, which turns into a two-day outback safari.

Mick Dundee (Paul Hogan), commonly referred to as “Crocodile,” is pretty much every Australian outback stereotype rolled into a single guy. Sue and Mick head out to the outback where he can tell her what really happened. He was attacked by a crocodile and was bitten, but still has all of his limbs and a kick-ass leg scar to show for it. They putter around the outback for a few days, Mick saves her from a croc while she is trying to prove she can take care of herself, and a bond grows between them. She’s fascinated with him, and it’s soon evident that he is very taken with her. There’s also a moment where she spies on him meeting with the local Aboriginal group, one member of whom is Neville (the great David Gulpilil).

And then Sue gets the idea to take Mick back to New York with her, and the second half of the film (almost exactly in terms of time) is a fish-out-of-water story as Mick tries to figure out New York and Sue decides that her fiancé/editor Richard (Mark Blum) is actually kind of a douchebag and that her heart really belongs to the untamed Aussie.

While Crocodile Dundee is pretty short on plot, it’s actually surprisingly long on entertainment. There’s nothing at all that’s new here in terms of an opposites-attract romantic comedy except for the specific situations. The most well-known of these is the attempted mugging in New York when a thug pulls a switchblade on the couple and Mick responds by drawing his massive blade, with the line “That’s not a knife…That’s a knife!” There are, of course, other places where Mick’s inability to understand city life come into play. It’s all in good fun and not serious.

I mean, there’s no real question that by the end of the film that these two aren’t going to end up together. There’s really not that much standing in the way of them. And we know it’s going to end with a suitable romantic moment that will involve a lot of people clapping and/or saying “Aww…” That’s what we know we’re getting and that’s exactly what we’re given.

So, Crocodile Dundee is fluff, but it’s the right kind of fluff. It’s easy to like Mick Dundee, both for his awesome survival/wilderness skills and for his absolute innocence once he hits New York. It’s also easy to understand why Sue falls for him. There’s an honesty about the character that’s difficult to dislike.

Shortly after this film was made, stars Paul Hogan and Linda Kozlowski were married, and were together until this year, when they formally divorced. In all of the Hollywood couples and coupling and recoupling, it saddens me a bit that these two didn’t stay together. I kind of liked them as a couple, admittedly because they’re such a cute couple on screen in this film.

There’s nothing remotely objectionable here. It’s cute, it’s fun, and everyone leaves with a smile on his or her face. That’s good enough for me.

Why to watch Crocodile Dundee: A cute romance.
Why not to watch: It shies hard away from reality.