There's a Joke in this Title Somewhere... 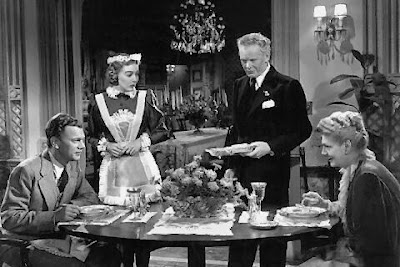 I’m a sucker for Joseph Cotten. Put him in a movie and I’ll watch it pretty much every time. In my continuing quest to get the Best Actress nominations under control (stupid 1001 Movies List), I came across The Farmer’s Daughter knowing only that Loretta Young won the 1947 Best Actress Oscar for the role. What a happy surprise to discover that her costar was the great Joseph Cotten. The minute his name came up on the screen, my interest in what was to come increased dramatically.

The Farmer’s Daughter is a baby step away from being a Capra film; in fact, it’s not much of a stretch to call it “Miss Holstrom Goes to Washington.” Young Katrin “Katie” Holstrom (Loretta Young) is heading off to the city to enter nursing school, a trip she had to delay when her brothers went off to fight in the war. Rather than take the bus, she’s offered a ride from Adolph Petree (Rhys Williams) who has just finished painting the family barn. It’s evident that Petree wants more than Katie’s company on the drive, and he conspires to put her in some compromising situations, which she ignores. However, when he damages his vehicle, he forces her to pay for it, and pay for separate motel rooms that night. And then, of course, he ditches her the next morning.

Katie arrives in the city broke, and unable to start school without money, hires herself out as a temporary cook to the Morley family. Her skill at making coffee and presenting a nice table ingratiates her to the family butler Clancy (Charles Bickford) and she’s soon hired on as a second maid. As it happens, the family she works for consists of Agatha Morley (Ethel Barrymore), a political mover and wife of a late senator and her son Glenn (Joseph Cotten), a current U.S. Representative elected to his third term just as Katie starts the job.

It’s soon evident that Katie can handle pretty much anything thrown at her, and she speaks with both a charming Swedish accent and a candor that the Morleys and others haven’t heard for some time. It’s also soon evident that Glenn is pretty smitten with her, and not just because she can make cool Swedish alcoholic beverages and is good on skates, and that she is falling pretty hard for Glenn as well. When she’s saved up enough money to head to nursing school, Glenn persuades her to stay, and she doesn’t need much convincing.

The plot takes a turn when one of Glenn’s colleagues in the House dies suddenly and a special election is called. The party, which we’re lead to believe is the only serious player in the area, decides to nominate a man named Anders J. Finley (Art Baker) for the upcoming election. Katie disapproves, noting that Finley has a sketchy track record of votes and positions on a number of issues, and she confronts him at one of his speeches. Noting this, the opposition party (the film is careful never to indicate which is which) calls her in and decides to nominate her to run against Finley, which necessitates her leaving the Morleys’ employment.

Ah, but Katie is right about Finley—he’s a creep, and we find out exactly how much of a creep at the end of the film. As Katie rises steadily in the polls, Finley decides to play dirty, specifically by paying Adolph Petree (remember him?) to claim that Katie spent the night with him in a motel, indicating that, in 1947 terms, she’s a loose woman. Naturally this sends Glenn into a panic since by this time he’s desperately in love with her, and we get pretty fun fight scene, some tearful confessions, and the ending we knew we’d get all along. It is 1947, after all.

Surprisingly, there’s a lot to like with this film. I expected it to be something of a yawner even with the awesome presence of Joseph Cotten, but as it happens, The Farmer’s Daughter is a lot more charming than I would have expected. A great deal of this comes directly from Loretta Young sporting the phony Swedish accent. In truth, it’s not much of a problem, and by the end of the film, I barely noticed it. Katie is an easy character to like. There’s not a lot of guile in her and she’s forthright and honest, and she has a couple of solid lines.

In a lot of ways, the film reminds me a great deal of the remake of Sabrina in particular—Ethel Barrymore plays it sly, like she always knows exactly what’s going to happen and exactly what is going on in everyone’s mind at all times. She’s having a good time with the character, and that helps the film out a lot. The same is true of the entire cast.

I was also surprised that a lot of the comedy carries over pretty solidly, too. There are some genuinely funny moments here that still work, which feels like a rarity in a film from this era.

Oh, this is nothing that will change the way you see movies and the end is telegraphed from a couple of miles away, but it’s harmless fluff and pretty fun all the way through. And really, you can’t ever go wrong with Joseph Cotten in the lead male role, can you?

Why to watch The Farmer’s Daughter: It’s cute as hell.
Why not to watch: It’s predictable as hell, too