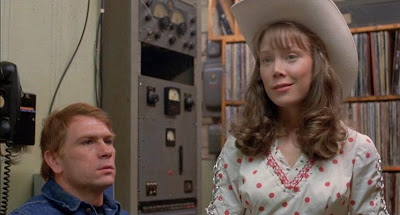 I come to the penultimate Best Picture of the 1980s with some measure of trepidation. The actual story of Loretta Lynn, depicted here with some measure of accuracy, is almost legend. Loretta Lynn was a mother at 15 or so (the legend says 13) and a grandmother at 29. Knowing that, knowing that this was going to start with her being a child bride left me with a great feeling of unease. And, true to form, there’s a very strong child molestation vibe in the first half hour of this film that it’s difficult to get away from.

This is because we don’t start with Loretta Lynn and we aren’t going to experience this in some sort of flashback. No, we start with young Loretta Webb (Sissy Spacek), just shy of turning 14, living in a houseful of her brothers and sisters. It’s hardly a shock, based on the title, that her father Ted (Levon Helm) works in a coal mine while his wife Clary (Phyllis Boyens) raises the massive brood of children. She soon meets Oliver “Doolittle” Lynn (Tommy Lee Jones).

Doolittle is fresh back from the war, in possession of a red Jeep, and is irresistible to the young Loretta. The two are soon a going concern, much to the consternation of Loretta’s parents, who foresee a life for her much like their own, filled with too many kids, crushing poverty, and coal dust. But the two are not to be stopped, and married they are despite her young age. The wedding night is truly unpleasant for her, and the early days of the marriage aren’t too much fun, either. It’s not too long before Loretta is pregnant and separated from her husband, living back with her parents.

Things change when Doo decides (and probably rightly) that the only things Butcher Holler, Kentucky has for him is a houseful of underfed kids, black lung disease, and an early grave. He moves to Washington to look for a different sort of work, promising to send for her when he can. And, in something of a surprise for how films like this often go, he does. It’s in Washington that Loretta, raising her own brood of children, learns to sing at Doolittle’s insistence. It’s he who gets her to cut a single, he who promotes her, and, eventually, he who helps her get to the big time.

I fully expected that Coal Miner’s Daughter to be something akin to a countrified version of a movie like Precious. You know, ultimate triumph of the human spirit through a tale of crushing hardship (we do get a bit of that at the start) and horrific abuse. In short, I pretty much expected Doolittle Lynn to turn out to be a colossal prick. In truth, the actual Doolittle Lynn was an alcoholic, sometimes violent, and a womanizer, and the legend goes that the spousal abuse was frequently mutual. But that’s not really the story here. Sure, this is a glorified version of the legend, but that’s really okay. I fully expected misery and woe, and certainly there’s some of that, but this isn’t wall-to-wall pain and suffering.

What I really find surprising is how naïve Loretta Lynn is depicted as being. I’m not doubting this as truth; I’m just saying it’s really surprising.

So let’s talk performances. First, it’s really weird seeing Tommy Lee Jones with a full head of hair. Doolittle Lynn is hardly depicted as a perfect man here—he is, after all, a philandering alcoholic. Jones is fantastic in the role, though, and completely believable. This is another of this instances where I wonder how he managed to escape notice come nomination time. I also like Bevery D’Angelo, who shows up a good way into the film as Patsy Cline, and did her own singing.

But it’s Sissy Spacek who rules this film. In fact, her presence here is so overpowering that it almost certainly explains why Tommy Lee Jones was passed over for a nomination. She turns in not only the best performance of her career (and with Sissy Spacek, that’s saying a lot), but one of the truly great performances of the 1980s, maybe the century. A lot was made of the fact that she did her own singing, and I’ll admit, it is surprising. I mean, she can really belt it, well enough that she was nominated for a Grammy for the title song. And the singing is very much the least of her performance.

I’ve said a couple of times in the past that one of the most unfortunate realities of the 1001 Movies list is that it appears biased against truly great female performances. With the number of weak films I sat through for that list, I’m actually angry that this was left off the list. I got stuck watching four Delphine Seyrig films, but one of the greatest acting performances of the last 40 years doesn’t make the cut. Dammit, that’s not right.

Fan of country music or no, there’s no way you can look at this film with anything other than incredible respect for what is here. That goes both for the life of the real Loretta Lynn and for what Sissy Spacek did with the role.

Why to watch Coal Miner’s Daughter: Sissy Spacek does her own singing, and as good as it is, it’s not the best part of her performance.
Why not to watch: Tommy Lee Jones looks weird with hair.