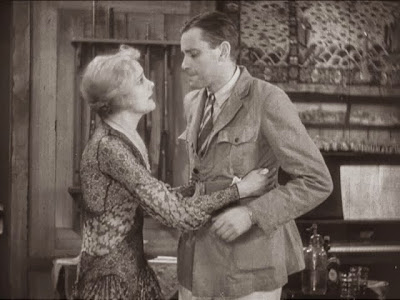 I’ve watch this story before. In situations like this, I probably should see the original version first, but I watched the 1940 version of The Letter with Bette Davis a couple of months ago. I didn’t have a ton of time today, though, and this one is nice and short, so it fit into my schedule nicely. As it turns out, I’m pretty happy it’s a short one because I’m not sure I would have wanted to watch it for much longer. When I say I’ve seen this story before, I mean that precisely—this is a pared down version and the ending is different, but there’s not a lot different between the two versions. I’m going to spoil this one, but believe me, that’s no big loss.

Leslie Crosbie (Jeanne Eagels, who was the first ever posthumous Oscar nominee for this role) is the bored wife of a rubber baron in the South Pacific. While he spends his day dealing with all of the problems of owning a rubber plantation, she finds a man named Geoffrey Hammond (Herbert Marshall) to spend quality time with. Eventually, the two fall apart and Hammond takes a Chinese lover named Li-Ti (Lady Tsen Mei). Desperate one evening, Leslie sends a litter to Geoffrey and demands to see him.

Geoffrey arrives and the two quarrel, specifically over the existence of Li-Ti. Evidently, it’s a mark of shame to have a Chinese lover and an even greater mark of shame to be tossed aside for a Chinese lover. She demands that he either return to her or admit that he’s playing house with Li-Ti. He does admit this, and goes on to say that he’s happier without Leslie. Enraged, she pulls a gun out of a drawer and shoots him. In fact, she empties the gun into him.

Of course there’s a trial, and Leslie perjures herself, claiming that Geoffrey attempted to attack her and that killing him was purely self-defense. The jury is ready to believe her—she’s a distraught woman and Geoffrey, after all, had a Chinese lover. However, Li-Ti has the letter, and uses it to blackmail Leslie. She demands $10,000, in fact, which was quite the sum back in the day. Knowing that she’ll be convicted if the letter (which confesses her love for Geoffrey) is entered into evidence, Leslie convinces her lawyer (O.P. Heggie) to purchase it. This purchase wipes out husband Robert Crosbie’s (Reginald Owen) bank account, which will kill his dream of buying a bigger and better rubber plantation in Sumatra.

So what happens? The lawyer eventually shows the letter to Robert Crosbie, who learns of his wife’s infidelity. And as punishment…he makes her stay where she is, unable to go to London or to Sumatra, since he can no longer afford it. And that’s the whole damn thing.

This version of The Letter is really unsatisfying. The remake, for one thing, has Bette Davis, and that’s saying a lot. But it also has a much more interesting ending and one that is hugely satisfying compared with the one we get here. There’s a total lack of catharsis with this film that makes it tease by the time we get to the end.

In fact, the most interesting thing about this film is that the lover character is played by Herbert Marshall, who, 11 years later, played the husband character in the remake. That’s literally the most interesting thing I can tell you about this film. That and star Jeanne Eagels died shortly after making this movie of a heroin overdose, which is how she became the first person to be Oscar nominated posthumously.

As for the movie itself, though, there’s not much here and there wouldn’t be with a 65-minute running time. We barely have time for the film to get set up and it suddenly ends, leaving us with two supremely unhappy people set to spend the rest of their lives making each other miserable. Really, the best thing about this film is its non-existent running time. It’s not terrible; it’s not even overacted in the way films from the early talkie days tend to be. It’s just not very good or very interesting.

This is a film you can easily skip unless you’re of the same “watch everything” mindset I seem to have. If you never spend an hour in front of this film, you’re not missing a thing.

Why to watch The Letter (1929) : Uh…it’s short?
Why not to watch: It’s really unsatisfying all the way around.