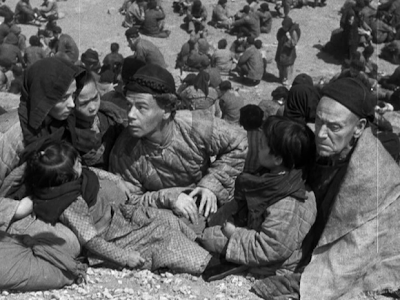 I’ve spoken of the acting prowess of the great Paul Muni before. He’s a forgotten actor these days, and it’s a damn shame. The man was, in addition to being a commensurate actor, a chameleon. This quality worked against him during his career because he was difficult to market. It works against him now, because he is frequently unrecognizable. In 1937, Muni had three movies released. One, The Life of Emile Zola, won Best Picture. Another, The Good Earth (the subject of this review), was nominated. It was a good year for Muni.

The Good Earth is an oddball of a film for 1937. It’s an epic, but it takes place in China, a world that would be completely alien to the majority of Americans. Once Muni was tagged to play Wang, the lead character of the film, the Hays Code required that any actress playing opposite him in the role of O-Lan, his wife, would need to be white as well. The role was filled by Luise Rainer, who became the first person to win back-to-back acting Oscars thanks to this role. It does feel like an odd film, though, especially these days with white actors in, for lack of a better word, yellowface. Some Chinese actors were used in other roles, but having white actors play foreign roles was hardly unusual for the time.

Anyway, like many an epic, The Good Earth tells a story of great upheaval and social change, and does so by telling the story of a single family, that of Wang and O-Lan. When the film starts, Wang is a simple farmer, the son of a simple farmer known in the film as Old Father (Charlie Grapewin). It happens to be his wedding day as the film opens. The marriage between Wang and O-Lan has been arranged by Old Father. O-Lan is a kitchen slave, so marrying the son of a farmer is actually a step up for her.

Wang, it turns out, is a pretty good farmer, and is soon able to expand his farm by purchasing land from the great lord nearby, the lord in whose kitchen O-Lan was a slave. Soon enough, instead of a single field for wheat, Wang has five fields and believes that his wealth and position are untouchable. But a drought soon changes everything. Famine comes, and the family, now with a son and two daughters, are on the brink of starvation. Wang is to the point of selling the land for a fraction of what he paid for it, but O-Lan will not let him. Instead, the family keeps the land, but moves to the south and begs for food.

When revolution comes and brings a republic, chaos reigns for a short time. During this time, O-Lan joins in the looting of a great house and comes away with a small sack of jewels. With their wealth restored and rains returned to the north, the family goes back to their land wealthier than ever. Wang becomes the new lord, purchasing the great house, but becomes uneasy. His fancy is taken with a woman called Lotus (Tilly Losch), who he takes as a second wife. Naturally, this causes a great deal of strife, in particular because Lotus is more interested in Wang’s younger son than she is in him.

As mentioned at the top, Paul Muni is a chameleon and completely unrecognizable in this role, which is both sad for him and a huge benefit to the film. He wasn’t nominated for this role, most likely because he was nominated instead for The Life of Emile Zola instead. But it is Luise Rainer is the heart and soul of the film, even if she doesn’t speak much. The biggest curiosity of the film is the culture it depicts. This may have been the reason the film was made in the first place, actually. It would have been such an alien world to the movie-going public that it might have been something of fascination to them. It ultimately lost money at the box office, though, so the gamble ultimately didn’t work.

What’s notable is that despite the massive cultural difference, The Good Earth attempts to depict this alien culture with a great deal of respect. It doesn’t tell the story in an effort to show the Chinese as strange or weird or barbaric, but simply different. That’s actually pretty admirable, considering the time and the inherent racism of the time and particularly of the Hays Code.

While the film is about this turbulent time in Chinese history, it is more about the quiet suffering of O-Lan, who deals with each hardship without complaint and with infinite patience. Everything good that happens to her is treated as a blessing she doesn’t deserve and every setback is merely what should have happened in the first place.

The money scene is a massive plague of locusts that comes at the end of the film. This is the scene that the entire film builds do, and it’s very much worth the wait. Wang’s older son, now college educated in agriculture, comes up with a plan to keep the locusts off the fields. Wang and the other farmers work to prevent the insects from eating everything, an event that causes a change in Wang’s outlook on the world and one what his life has been. It is this that is the ultimate message of the film. That, and perhaps that ultimately, all of us are very much the same.

I didn’t know what to expect with The Good Earth, but I rather liked it. It’ not a film I’d watch frequently, but it’s solidly acted and the story is a pretty good one, and tht’s really enough.

Why to watch The Good Earth : An interesting epic, especially for its time.
Why not to watch: White actors in Asian roles.