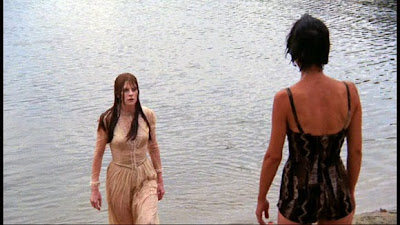 The unreliable narrator is one of the classic dodges in storytelling. Most of the time, the audience doesn’t know the narrator is unreliable until a good way into the story. It ends up being a shock moment that everything we have seen up to this point might be nothing more than a figment of someone’s imagination. Let’s Scare Jessica to Death does that one better by telling us straight up that the character we are following through the film is potentially as crazy as a shithouse rat.

Jessica (Zohra Lampert) sits in a rowboat talking to herself. We then flash back to the last few days to see what has brought her to this state. We discover that she, her husband Duncan (Barton Heyman) and their friend Woody (Kevin O’Connor) have moved to a little island on the East Coast to help Jessica recuperate from her recent stay in a mental institution—we never learn why she was there.

It’s evident that she was there for something, though, because we’re not more than a few minutes into the film and she’s seeing a young girl in a nightgown beckoning to her from a graveyard. When she sees this, her internal monologue repeats that the girl is not really there and that she should say anything to Duncan or Woody. Get used to this, because Jessica seeing things that we sometimes see and sometimes don’t will be a running theme through the film.

Eventually, we get to the house, and it’s here that things take a turn for the understandable but very strange. Jessica sees someone in the house, but is quickly reassured by Duncan that he saw it, too. The person turns out to be Emily (Mariclare Costello), who has been squatting in the old house. The new trio invites her to stay with them since it is evident that Woody likes her quite a bit. They also decide to hold a séance on their first night, which seems like a bad idea for a woman who has just exited a mental institution.

It’s not too long after this that they discover the history of the house, known locally as the Old Bishop Place. They learn this from an antique dealer named Sam Dorker (Alan Manson), who also appears to be the only local who will talk to them. In fact, the rest of the locals, who are all old men, tend to be surly, rude, and aggressive toward the newcomers. As it happens their house once belonged to the Bishop family. Abigail Bishop drowned just before her wedding, and is said to still be roaming the island as a vampire—an idea that is given minor credence by the fact that all of the residents seem to be sporting bandages. In a photograph of the family, we learn that the deceased Abigail Bishop looks exactly like our house squatter, Emily.

Anyway, strange things start to happen. Jessica starts hearing voices, seeing things, and having things grab her when swimming in the cove. She does her best to keep it together despite discovering that her husband seems to like Emily about as much as Woody does. Events play out to get us back to Jessica in the rowboat at the beginning—I won’t spoil how we get there or everything that Jessica sees. The film ends with its main questions unanswered. Is Emily actually the risen spirit of Abigail Bishop? Was this all a ruse to drive Jessica insane again? Is it all just happening in Jessica’s head? And how much of what we’ve seen happened in reality at all?

This could be an easy movie to dislike. The characters regularly seem to make really bad decisions, like holding a séance with a woman just released from a mental institution and another woman they just met. I think the trick to watching this film and enjoying it is to turn off that critical part of the brain and just go with the story as presented. After all, by the time we get to the end, there’s no real evidence that Jessica even left the mental institution in the first place. It could, in fact, be an entirely elaborate fantasy.

More or less, it’s an experiment in surreality. The characters other than Jessica act in ways that defy sense, which leads me to think that a great deal of this is happening in Jessica’s imagination. And, since it’s Jessica’s viewpoint that we’re limited to, we can never really be sure that what we’re seeing reflects reality. What happens might be as she sees it, or it all could be a great deal less sinister. For instance, at one point, Emily pushes Jessica into the cove. Is that really what happened, or did she slip in or get bumped in accidentally? We’ll never really know.

I liked Let’s Scare Jessica to Death. I like the slow burn aspects of it and I love the atmosphere it creates. It’s potential is better than its reality, but it’s reality is better than I’d hoped it would be. In truth, this is a film that could stand a slight rewrite and a remake. It’s been long enough; someone needs to take a flier on remaking this as a low-budget indie.

Why to watch Let’s Scare Jessica to Death: Great atmosphere.
Why not to watch: The actual film isn’t as good as the premise.