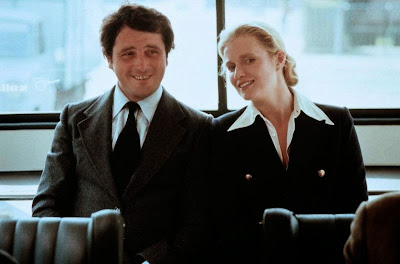 There’s something immediately icky about the premise of Cousin, Cousine on first blush. A pair of cousins meet at a family wedding and, essentially, become infatuated with each other. It’s far less that in actual practice. Yes, our two principle characters are cousins, but are related only through marriage. And, for the bulk of the film, that relationship is completely platonic. I admit I was a little leery of the film until it became evident that these two people aren’t directly related in any way.

Cousin, Cousine is a sex comedy in the main and right at home in the mid-1970s. Marthe (Marie-Christine Barrault) is the daughter of the woman getting married to Ludovic’s (Victor Lanaux) uncle. They meet at the reception, both having been abandoned by their spouses. As it happens, her husband Pascal (Guy Marchand) and his wife Karine (Marie-France Pisier) are off having sex with each other. And, as it happens, Pascal is quite the womanizer. When Pascal and Karine return to the reception, quite obviously having had an afternoon of each other’s naked company, they find Marthe and Ludovic dancing. Pascal immediately comes over jealous and breaks off all of his affairs, which number about half a dozen. He then admits this to Marthe, planning to be faithful from then on.

Throughout the film, Ludovic and Marthe meet each other, at first by accident and then by design. They discover that they have a great deal in common and genuinely enjoy each other’s company. As their relationship begins to grow, suspicion begins to build in both Karine and Pascal, who are convinced that their respective spouses are having an affair. As frequently happens with this sort of film, neither of them seems to sense the irony that the two of them had a brief affair with each other. And, eventually, Ludovic and Marthe realize that their relationship actually is more than platonic.

Cousin, Cousine is in many ways the template for a sex comedy. The characters have virtually written themselves in your mind already. Both Marthe and Ludovic are the sort of people you’d enjoy spending a day with. They are funny, bright, and completely open to new experiences and having little adventures in the middle of the day, like gorging on pastries and going swimming on impulse. And, just as naturally, their spouses are rather hateful, petty, and small-minded. Pascal’s hobby is taking his family to expensive restaurants and then complaining about the food. Karine, after recovering from a phantom ailment, decides to quit her job and force Ludovic to take a position he doesn’t really want because it pays more to make up the difference. It’s easy to like our main characters and want them to be together and it’s just as easy to dislike the spouses they start with. That’s sort of the point.

This relationship is the heart of the film, as it should be. There’s a lot of extraneous stuff here that doesn’t really do much for the plot, though. For instance, at a second wedding, one during which Ludovic and Marthe run off, a great deal of time is spent watching Pascal fighting with a man who once stole a bunch of money from him. By this point in the film, we’ve already decided that Pascal is pretty loathsome, and we don’t really need more of a reason to dislike him. We see Karine’s evident neuroses at the same wedding, but again, we already dislike her.

There’s a lot to like here despite the large number of red herrings in the plot. Why have kids dress up like rabbits at the second wedding? Why give us a long shot of the bride crying? For a film as short as this one is (just past an hour and a half), it feels like a good 15 minutes could be cut without losing anything in terms of the plot.

And yet, despite the extraneous material, Cousin, Cousine is pretty entertaining all the way through. Ludovic and Marthe are completely likable. And when her mother, grieving for the husband who died suddenly after the first wedding in the film and Ludovic’s father, himself grieving decide to spend time together, we’re happy about it. They’re a cute old couple and they’re good together. The real joy of the film is watching Karine and Pascal act entirely in their own self interest for the first part of the film and then be overcome with jealousy (first wrongly, then rightly) at the end. A big part of that joy is that both think they are starting to act selflessly, but in fact are simply redirecting their own selfishness.

And really, that’s the point of a film like Cousin, Cousine. The entire point is to introduce us to characters that we want to see end up together and spend the entire film getting them together in the way that makes us happy. It’s hardly a perfect film, but a lot of films that have come after it, notably Four Weddings and a Funeral very much borrowed from it, and that certainly says a lot for it. There's a bit of In the Mood for Love here, too. It’s not easy to find, but if you can come across it, it’s worth your time.

Why to watch Cousin, Cousine: An intelligent and funny sex comedy.
Why not to watch: The plot goes in a lot of places at once, not all of them productive.