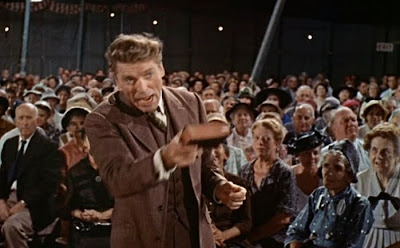 I had interesting, mixed feelings about watching Elmer Gantry. I make no secret about my lack of religious beliefs; in fact, I pretty much mention them every time a movie with significant religious overtones or themes shows up on this blog. I have a fairly regular readership, so those of you that read this blog regularly are likely thinking, “Here we go again.” Yeah. Sorry about that. It’s worth bringing up for films like Elmer Gantry, because it’s entirely possible that this might be someone’s first visit here. My lack of belief and skepticism almost certainly colors anything I have to say about a film that treads this heavily onto the territory of religion. For what it’s worth, I prize intellectual honesty.

There’s a lot to like with Elmer Gantry, starting with our title character, played by Burt Lancaster. When we first meet him, Elmer Gantry is a charming rascal, the kind of guy who could sell freezers to Inuit. He’s quick with a drink and an off-color joke as long as it keeps the sales rolling in. But it’s a depressing life, moving from place to place, living in dirty hotel rooms and picking up women without their husbands knowing.

This changes, at least on the surface, when he encounters Sister Sharon Falconer (Jean Simmons), a lay preacher holding tent revivals. It’s difficult to tell if this is merely another phase of Elmer Gantry the salesman or if it’s something real. He certainly puts on the airs of being a true believer, and manages to hitch onto the same train as Sister Sharon’s traveling show after getting some basic information about the woman from Sister Rachel (Patti Page), who leads Sister Sharon’s band. On the train, Elmer meets William Morgan (Dean Jagger), Sharon’s business manager as well as Jim Lefferts (Arthur Kennedy), a reporter covering the revivals for his newspaper. Over the course of the film, we learn that Jim Lefferts is both a Pulitzer winner and an atheist.

We also learn that Elmer Gantry is almost legendarily charming as he worms his way into the revival show. In fact, it’s not too long before he’s Sharon’s opening act, preaching fire and brimstone and damnation all around while Sharon preaches love and kindness, sort of a bad preacher/good preacher routine. Gantry also brings in a number of sensationalized gimmicks to the show, much to the increasing chagrin of William Morgan.

Eventually, the revival is invited to play the town of Zenith, which in the film is a major Midwestern city. This is the big time for them. For Sharon, who needs to be convinced that this is the right thing to do, playing Zenith means the chance of collecting more souls for Jesus. For Elmer, it might mean the same thing, but it’s also a chance to play the big time and bring in significant wealth. After a meeting with some church leaders, all of whom seem to be desperate for anything to boost church attendance, Sister Sharon seems like a blessing in disguise.

But it’s here in Zenith that Elmer’s past comes back to bite him. Despite his glad-handing, artificial laugh and obvious smarmy salesmanship, Elmer Gantry was once a theology student and was kicked out for compromising the virtue of the deacon’s daughter, Lulu Bains (Shirley Jones). This episode got Elmer kicked out of school and Lulu kicked out of her family’s house. As the revival shows up in Zenith, we learn that Lulu Bains is still around, and happens to be living in Zenith and working as a prostitute in a brothel. Naturally, this leads to corruption, blackmail, and all sorts of fun for the wily Elmer.

There are number of interesting aspects to Elmer Gantry that bear discussion here. For me, Jim Lefferts, a man who reluctantly admits being an atheist in 1960 film, is a fascinating character. What makes him particularly interesting is that despite the film being made in 1960 and despite his admission that he does not believe that Jesus was divine, Jim Lefferts is perhaps the most morally upstanding character in the entire film. When the story breaks about Elmer and Lulu—with pictures of the two clinched in an embrace, no less—Lefferts refuses to run with the story because he considers it yellow journalism. I’m mildly surprised Arthur Kennedy didn’t earn a nomination for himself.

Elmer is also interesting. We never really know if he’s the true believer he claims to be or if he’s nothing more than a carnival huckster. There are moments of both in the film, and several times where he appears to be both at once. Similarly, Sister Sharon, while giving the impression of being a woman truly inspired by her religious fervor, seems motivated by baser instincts as well. Some of this comes from her and some from Elmer, particularly in the scene where he seduces her. Racy stuff for 1960.

Shirley Jones won for Best Supporting Actress for this role (Lancaster won as well) and I’m hard pressed to suggest it wasn’t warranted. She’s not in the film nearly enough for my tastes. There’s something both tawdry and pure about the character. Jones plays Lulu as a woman who has fallen and accepted her fall, but is also wanting to climb back into the light. There’s a lot of struggle in Lulu, and I’d have liked to see more of it.

If there’s an issue here, it’s the ending, which plays like a bad soap opera. The last 10 minutes simply don’t work for me unless I assume a lot of people to be a lot dumber than the rest of the film has made them out to be. Elmer Gantry, ultimately, doesn’t go far enough. It paints a tainted picture of revivalism, but leaves enough wiggle room for the blindly faithful to get a message that works for them as well. That was a door that this film should have closed.

Why to watch Elmer Gantry: Demonstrates religion as a business.
Why not to watch: The ending isn’t what it should be.