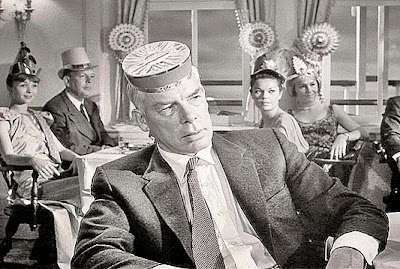 The “Noah’s Ark” film has a long history in Hollywood. Films like Grand Hotel and Stagecoach are representative of the style. Ship of Fools, recipient of a whopping eight Oscar nominations and winner of two is exactly this sort of a film. It’s a sadly forgotten film for being one that had this much acclaim 50 years ago. This seems to happen pretty regularly with a lot of films. They get a great deal of acclaim in the moment but become less and less relevant for one reason or another. Ship of Fools is perhaps damaged by being a film not about World War II but the years half a dozen previous when the war was just a threat on the distant horizon.

Our ship contains quite the motley crew, as befits a Noah’s Ark film. We’re given a collection of personalities that would otherwise not be seen together in any other situation to see what happens when they are forced together. The ship is traveling from Veracruz to Bremerhaven in 1933, just at the beginning of the Nazi rise to power. Our collection of people include a group of Spanish dancers who have been hired as relatively uninspiring entertainment; an American couple (George Segal and Elizabeth Ashley) who have relationship problems based on his failure as an artist; an aging divorcee (Vivien Leigh) who drinks too much and flirts with every man in an effort to claim to be younger than her actual age; a failed baseball player (Lee Marvin); a countess (Simone Signoret) being taken to prison, an anti-Jewish businessman (Jose Ferrer); a Jewish salesman (Heinz Ruhmann); a dwarf shunned by proper German society (Michael Dunn); a ship’s doctor with a heart condition (Oskar Werner); and a collection of 600 workers in steerage being sent back to Spain from Cuba. It’s quite a mix.

And so, the film is more or less an exercise in putting these people on the same long ocean voyage and seeing what happens when various people with different beliefs, problems, and ideologies clash. Love blooms, love fades, and life goes on despite rumors of war on the near horizon.

Ship of Fools really trades not on the plot, which doesn’t really exist, but on the interactions of the characters and the performances. Oskar Werner and Simone Signoret both earned Best Actor/Actress nominations and Michael Dunn earned one for Supporting Actor. It’s difficult to say that they weren’t earned. In fact, it’s almost surprising that the film didn’t earn more nominations for acting. It’s also worth noting that the underrated Werner Klemperer appears as one of the ship’s officers and that he doesn’t wear the monocle that he is so regularly associated with and that he has a full head of hair.

In a lot of ways, Ship of Fools reminds me of Grand Hotel. There are so many stories here and so many actors of note that it’s almost hampered by how rich a field it offers. There is so much available here that the lack of a plot isn’t noticed during the film but becomes evident afterwards when trying to recall what happened. There are too many minor points and minor plots to recount. Either this review will end up ridiculously short (likely) or so long that it would not be worth reading.

In fact, this may well be why Ship of Fools has all but been forgotten. There is so much to see, but it’s all so convoluted and interconnected that it’s difficult to describe accurately. In fact, it’s almost impossible to know where to start, and once started, where to end.

What’s truly surprising is how dark this film becomes by the end. Oh, certainly there’s a great deal of darkness with the coming storm and the hints of the holocaust to come, but there is a great deal of darkness beyond that in many of the relationships. That darkness ends up being the most interesting part of the film. This is particularly true of Vivian Leigh’s character. But is unpleasant as that becomes, it is hardly the only thing that leaves the viewer feeling oily.

This is a film that should be better known than it is. It is much better than its lack of reputation.

Why to watch Ship of Fools: A brilliant cast and top-notch performances all the way around.
Why not to watch: It’s lack of plot hurts its memorability.