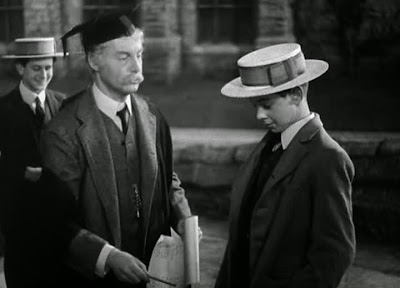 I tend to pick movies more or less at random and according to availability these days. I did the same thing with the 1001 Movies list, not wanting to spend too much time in any one era or year. When I switched over to Oscar films, I was left with a number of years in which I had seen most of the relevant films and other years where I had seen only a couple. One of those years where I’ve seen most of the films on my Oscar lists is 1939, widely considered one of the greatest years in Hollywood history. It’s hard to argue that point, and Goodbye, Mr. Chips only adds to that year’s luster.

I seem to say the following a lot: this is actually a pretty simple story, a plot that isn’t really much of a plot. Goodbye, Mr. Chips is much more a character study and the story of a man’s life than it is an actual plotted tale. And really, that’s all it is. Mr. Chipping (Robert Donat) begins the film as a newly hired Latin teacher at a British boarding school called Brookfield. We learn that Brookfield has a long and storied history, having been established at the end of the 15th century.

Chipping is subjected to some significant hazing, not by the rest of the faculty but by his students. He responds by becoming a strict disciplinarian, which makes him respected but not well liked. This attitude he has causes him to be passed over for a promotion. In consolation, the school’s German teacher, Staefel (Paul Henreid) invites him to come on a walking tour of his native Austria with him. Chipping goes, and it is here that he meets Katherine (Greer Garson, in her first major film role). Despite their age difference (in reality, Donat was a year younger than Garson), the middle-aged Chipping and the young Katherine fall hard for each other and are soon married.

It is Katherine who gives Chipping the nickname of Mr. Chips, or simply Chips. She proves to be quite the charmer, and soon becomes the focus of the social life of the school, at least for a few years. She also, through her example, teaches her husband how to befriend the boys in his charge and loosen up in the classroom, a change that turns Chipping into one of the favorite teachers of the boys, year over year. Tragedy strikes (as it always does) when Katherine and her baby die in childbirth, leaving Chipping alone to continue teaching generations of boys, often the sons of boys he taught in the past.

The film takes us up through World War II, Chipping’s retirement, return to the school during the war, and second retirement. It is, more or less, about his life than anything else, and about the relationships he formed with the boys more and specifically generations of boys year over year. In fact, Terry Kilburn plays four generations of the Colley family as young students, all of whom pass through Chipping’s classroom at one point or another.

Goodbye, Mr. Chips is a hard film to dislike, even if the title more or less gives away the ending. It’s a sweet film, telling the life of a man who dedicated himself not merely to the Latin education of the boys in his charge, but to the turning of those young boys into men. I can only imagine that the long period in the film of Chipping seeing his students grow under his care only to be killed in the meat grinder of World War I played mightily to the crowds of moviegoers for a film released a few scant months before the outbreak of a new terrible war on the continent. And yet, despite all of the terrible losses, this is not an anti-war film. In fact, when Chipping learns that his Austrian friend Staefel has been killed in the war fighting for Germany, he announces his name in the chapel just as he does the former students and masters killed in battle.

Perhaps the most impressive part of the film, beyond the performance of Robert Donat, is the make up. Donat was in his mid-30s for this film, but genuinely looks like a man in his 60s and his 80s for a great deal of the running time. There’s no obvious cosmetic work here, at least that I could tell. Much of this comes from Donat’s performance, of course. The man genuinely acts the age of his character, and Mr. Chips is a memorable character, indeed.

It is, in hindsight, perhaps too obvious in where it is going to go. Many of the film’s events play today like cliché, even if they were new or relatively new in 1939. That’s not the fault of this film, though.

It’s a sweet movie, even if it feels light in the plot department. Mr. Chipping seems like the sort of teacher everyone wants to have at least once in his or her life, and spending time with him is enough to make the film worth seeing.

Why to watch Goodbye, Mr. Chips: A sweet story beautifully told.
Why not to watch: There’s a lot here that looks like cliché from this perspective.