Up Where We Belong

Film: An Officer and a Gentleman
Format: Streaming video from NetFlix on laptop. 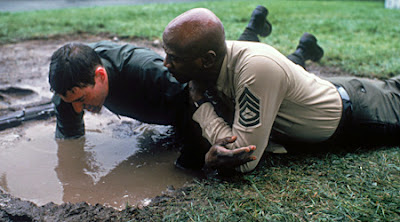 I’m sure a lot of people have a different takeaway from An Officer and a Gentleman than I do. Some might come away thinking that Richard Gere was a sexy beast in the early part of his career or that Debra Winger had a great start to her career. Some might even come away thinking that there’s something special about power ballads from the 1980s. For me, An Officer and a Gentleman is all about Lou Gossett Jr.

The story here is pure Hollywood. Zack Mayo (Richard Gere) is the unwanted son of a Navy man stationed in the Philippines with a mother who has committed suicide. Zack grows up with virtually no contact from his father (Robert Loggia) and graduates from college almost to spite the old man. And then to truly spite him, he signs up to be a Navy pilot, wanting something more than his father’s life on a ship punctuated with nights of sex with Filipino prostitutes.

When Zack arrives at the officers training camp, we meet the main antagonist of the film, Sergeant Emil Foley (Lou Gossett Jr.), who takes an immediate dislike to Mayo and the two people Mayo finds himself friends with: Sid Worley (David Keith) and Casy Seeger (Lisa Eilbacher). Sergeant Foley tells the entire class of recruits that their education is worth $1 million, and that he will do everything he possibly can to bust them out of the program, by fair means or foul.

We jump ahead a month or so into the 13-week program to give us the romantic angle of the film. Zack and Sid meet two local women at a Navy-sponsored dance. They’ve been warned about the local women who apparently want nothing more than to marry a Navy pilot and will either fake a pregnancy or actually get pregnant to ensure that their candidate of choice marries them. This does not deter our two pilots-in-training. Sid becomes attached to Lynette (Lisa Blount) and Zack becomes involved with Paula (Debra Winger).

The first major turn comes about an hour in when Mayo’s money making scheme is uncovered. Mayo pays a non-com to shine belt buckles and boots, which he then supplies to other candidates as they need them. Foley, who has already taken a dislike to Mayo, decides to deny Mayo weekend leave and bust him, forcing him to drop. Part of Foley’s dislike of Mayo comes from Mayo’s attitude and more comes from Mayo’s evident inability to be a team player. This culminates in the “I got nowhere else to go!” moment, which is one of the better ones in the film. From this point forward, there is something like an understanding between Mayo and Foley.

The next major turn happens when it becomes evident that despite her claims, Zack and Paula are turning serious enough for him to meet her parents. This isn’t what either of them intended, but if we’re going to have a romance, we’ve got to have a real one. Evidently, Gere and Winger disliked each other, which makes Debra Winger’s Oscar nomination particularly earned. Anyway, the entire premise of their relationship was built on the idea that Zack would only be around for 13 weeks, and his constant running on the edge of dropping and imminent graduation becomes a thorn in their relationship.

The final major turn concerns Sid and Lynette. It turns out that Sid has a long-term girlfriend back home, but just as he was warned early on, Sid runs into trouble with Lynette. She claims to be pregnant and he drops from the program and offers to marry her. That, though, is not what she wanted—she wanted to marry an officer and a pilot. This leads to a painful climax, which is then followed by the tender conclusion of the film, which is actually pretty noteworthy.

An Officer and a Gentleman is a pretty good romance all told. It’s smart enough to focus enough on the romance to keep us interested but not focus on it exclusively. In fact, one of the strengths of the film is that the conflict of the film in terms of the rising action, is entirely the romance. In terms of Zack’s path through flight training, it’s a case of overcoming obstacles as they are presented. Normally, I would object to this, but since the focus is more on the romance, it works well.

Overall, the performances are good throughout. The focus is on the relationship between Zack and Paula, of course, but they are surrounded by a solid cast. Principle among these is Lou Gossett Jr. as I mentioned at the top. This is one of those roles that, once played, is almost impossible to imagine in the hands of another actor. Gossett Jr. inhabits this role completely; there’s not a moment I don’t believe him in the role. He couldn’t be better.

I like this movie probably more than it deserves, but there’s a sweetness to it that makes it worth the time.

Why to watch An Officer and a Gentleman: It’s a solid romance that holds up pretty well.
Why not to watch: The ending is sappy despite being effective.