Film: Under the Volcano
Format: Streaming video from Hulu+ on laptop. 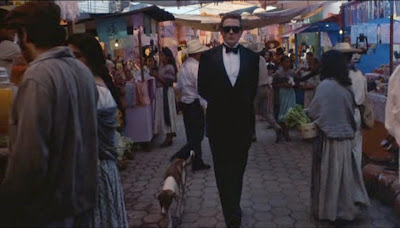 There’s a certain reality when I find a film like Under the Volcano. This is a film I’d never heard of before compiling my Oscar list and it was nominated (in terms of awards I care about) only for Best Actor. Generally speaking, what that means is a fairly average movie with a singular stand-out performance. That’s almost the case with Under the Volcano. The most pressing and singular reason to pay attention to this film is the performance of Albert Finney. However, unlike many films with a single acting nomination, there are some other reasons to watch this one as well.

The story is both simple and nearly impossible to follow. Geoffrey Firmin (Albert Finney) is the ex-British Consul stationed in Cuernavaca, Mexico. His wife Yvonne (Jacqueline Bisset) has left him, but has continued to write him letters, none of which he reads. It’s obvious from the first moment we see him that Geoffrey has been drinking for a very long time. It’s evident soon after that that Firmin hasn’t just been drinking on this day. Geoffrey is more or less a professional drunk, the sort of a man who is so used to constantly fueling himself with alcohol that he can no longer function without it.

As it happens, the film takes place over the course of, effectively, one day. That day happens to be Dia de los Muertos, meaning that a carnival is taking place. As it also happens, this is in the few remaining years before the beginning of the Second World War, and there are rumors that the Nazis are funding fascist organizations in Mexico, not that Geoffrey cares about this since resigning his position. After a night of drinking, in part to drown out the pain of his recent divorce and in part because he knows no other way to act, he wakes up to find that Yvonne has returned to him. Also returning is his half-brother Hugh (Anthony Andrews), a socialist sympathizer recently back from covering the Spanish Civil War.

This, more or less, is the entire film. Geoffrey wanders his way through the carnival drinking prodigious amounts of booze and realizing just how wasted his life truly has become. Yvonne does her best to rescue what is left of her destroyed marriage, unable to help herself despite Geoffrey’s legendary drunkenness. For his part, Hugh does his best to take care of his half-brother and contemplates returning to England and joining up for what he assumes will be the coming war.

It’s worth noting that Under the Volcano is yet another in a series of books considered to be unfilmable. Director John Huston was evidently the seventh person to option the story and the first to film it successfully. I haven’t read the book, so it’s not for me to say why it had this reputation of being a story that could not translate to screen. Part of it may be simply how debauched it is throughout. While there’s not a great deal of sex or nudity, what is here is completely (and intentionally) unappealing. Part may be the rambling nature of the narrative, or the fact that there’s not really a great deal of narrative here. And part of it may be that at its core, Under the Volcano is ugly and tawdry. That’s by design, make no mistake. This is a film that tries to be nothing more than forcing us to witness a man’s self-destruction, a man opting for spiritual, physical, mental, and emotional death on a day that celebrates the dead.

His personal dissolution is evident in any number of ways throughout the film. Early on, he refuses to drink mescal. By the end, it’s the only drink he wants. At the start of the film, he is desperate for his wife to return to him; by the end, he is avoiding his wife and having sex with a cheap prostitute. While his degradation is complete, he never comes to realize it, and by the end he’s given up caring about anything, least of all his own life.

It’s worth noting that both Anthony Andrews and Jacqueline Bisset are very good, or at least better than merely serviceable in Under the Volcano, but it takes some work to realize this. This is absolutely Albert Finney’s film from beginning to end. If a part of me didn’t think it couldn’t really be the case, I would believe that he spent the entire film shoot a drink away from vomiting and passing out. Finney manages to run the gamut of emotions and the gamut of states of inebriation throughout the film and never breaks it. It’s a master class on acting in general and on being every kind of drunk imaginable.

This is not a film to watch when you’re looking for a little light entertainment. There is only one way this film can end, and it’s evident where we’re going before we get there.

I can’t say I liked Under the Volcano, but I can say that it was worth seeing for Albert Finney. But it’s not one I want to see again.

Why to watch Under the Volcano: Albert Finney. No other reason.
Why not to watch: What plot there is is difficult to follow.

Posted by SJHoneywell at 7:01 PM