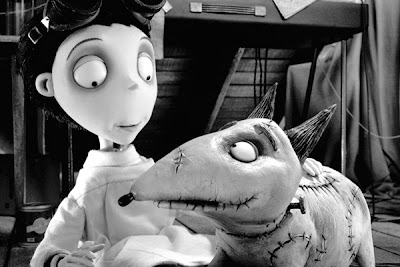 Film nerds have their pet directors. There are Christopher Nolan nerds who will forgive him any sins (like The Prestige, yes, I know I’m in the minority on that) until he does something so terrible that it’s not worth defending. Quentin Tarantino is another director who has a legion of fans who will watch anything he produces. Back in the late 1980s and through the 1990s, the film director that nerds tended to choose to geek over was Tim Burton, a love affair that lasted until Burton’s wretched remake of Planet of the Apes. Anyway, back in those dark days, anyone who knew Burton also knew that one of his first projects was a short film called Frankenweenie about a boy who brings his dog back from the dead a la Mary Shelley’s story. So when an animated version of the story headed by Burton was announced, it was evident that this would be a labor of love.

And that is the basic story here. Young Victor Frankenstein (Charlie Tahan) is something of a social outcast in school, but he seems perfectly happy working on weird projects and making home movies with his dog, Sparky. When the school science fair comes around, he wants to participate, but his father (Martin Short) cuts a deal. Victor can participate in the science fair if he also plays baseball. Given no other options, Victor agrees. Tragically, in his first at-bat, Victor cranks a home run and Sparky runs after the ball, only to be killed when he runs into the street.

In school, his science teacher Mr. Rzykruski (Martin Landau) demonstrates the nervous system to the kids by running an electric current through the body of a dead frog. This, of course, gives Victor the idea of reanimating Sparky through the power of electricity, which naturally works. While Victor attempts to keep his reanimated pet a secret, local kid Edgar “E” Gore (Atticus Shaffer) finds out and demands the secret of reanimation or he’ll tell everyone. Of course, he tells everyone anyway, and suddenly a number of the other kids want the secret of reanimation for themselves, specifically for the science fair. And, of course, mayhem ensues.

One of the joys of a film like Frankenweenie is finding as many of the references as possible, and this is a film loaded with references. In fact, it might be impossible to name them all, but there are a few very clever ones. Victor’s next-door neighbor, for instance is Elsa Van Helsing (Winona Ryder), making reference to both Elsa Lanchester, who played the Bride of Frankenstein and to Dracula’s main enemy. Elsa’s dog is named Persephone, the queen of the underworld in Greek mythology, and after an electric shock, Persephone ends up with the white hair streaks associated with Elsa Lanchester’s famous character. One of the school kids (voiced by Martin Short) is an obvious reference to Boris Karloff. Even the mayor (also voiced by Martin Short) is a callback to the old Rankin/Bass Christmas specials. And Mr. Rzykruski is clearly based on Vincent Price. I know there are more...feel free to comment below.

In the third act, the other kids have attempted to use Victor’s reanimation technology, they cause a number of mutant reanimated dead things to attack the town, including a werewolf-ish rat, mutated sea monkeys that are reminiscent of gremlins, a giant turtle like Gamera, and more. And, of course, we end with a confrontation between torch-wielding angry villagers in a windmill. It’s actually pretty impressive how many of these references work both as references to classic horror movies and work within the context of this film, too. It’s an impressive bit of writing.

I seem to have somehow gotten this far into the review without mentioning Catherine O’Hara, who voices Victor’s mother, the gym teacher, and the appropriately named Weird Girl, whose pet cat eventually causes a great deal of the problems in the third act. Weird Girl is one of the great characters of Burton films, and only Burton seems capable of creating a character who sees portents in the shape of her cat’s feces.

I don’t really have a lot of complaints about Frankenweenie. It’s a cute film, and mildly creepy but fun in the way a lot of the best of Burton’s work is. It’s also unmistakably a Tim Burton film in terms of the look. It looks, well, a lot like Corpse Bride, with most characters having inverted triangle-shaped heads and sunken eyes. Victor in this film looks like a younger version of Victor from the previous film. It’s mildly interesting that Burton made a film without Johnny Depp or Helena Bonham Carter, but Burton veterans Catherine O’Hara (Beetlejuice ), Winona Ryder (Beetlejuice, Edward Scissorhands) and Martin Landau (Ed Wood) offer a sort of continuity to previous Burton projects. There’s even a Danny Elfman song.

As a final note, I love that the decision was made to film this in black-and-white. It’s another great callback to the horror films that obviously fueled this film and a great way to pay homage to the movies that gave Frankenweenie so much of its heart.

Why to watch Frankenweenie: A classic horror tale made accessible for kids.
Why not to watch: Well, children really shouldn’t play with dead things...