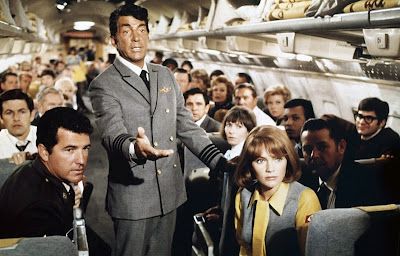 Genres and sub-genres start somewhere. In the 1970s (and yes, I know this from having lived through them), it seemed like every year came with a disaster picture, many of which were produced by Irwin Allen. As it happens, though, the original disaster pic, Airport, was not an Irwin Allen movie. This is the film that started the sub-genre that gave us films like Earthquake, The Towering Inferno, and The Poseidon Adventure. That’s either a good thing or a bad thing, depending on your point of view.

Basically, this is a film that has the central conceit of giving us a typical day in the life of a major Midwestern airport. In this case, that means a blizzard, closed runways, and angry board of directors, protestors, an elderly stowaway, and a guy with a bomb in a briefcase. We also get a couple of failing marriages, a couple of affairs, and a grizzled maintenance man. In addition to serving as more than the daily suggested allowance of melodrama, Airport also serves as enough of a love letter to the 707 airplane that I suspect Boeing may have had a hand in the financing.

Anyway, Lincoln airport, a fictional hub near Chicago, is undergoing a massive snowstorm with a huge dump of snow on the runways, which the airport is desperately trying to clear. This is happening simultaneously with a protest from a local community about Runway 22, which sends planes directly over the neighborhood. Airport manager Mel Bakersfield (Burt Lancaster) is doing his best to get the runways cleared, but the situation is complicated by a plane (the first of the 707s we’ll spend time with) that has slid off a runway, closing the main runway for landings and take-offs. The airport’s board of directors wants it shut down, but Mel refuses, doing his best to keep things running as much as he can. To help move the airplane off the runway, Mel calls in Patroni (George Kennedy), a maintenance expert.

Meanwhile, Mel is having marital problems and spends a lot of time at the airport specifically to avoid being home. He’s also having something like an affair with Tanya Livingston (Jean Seberg), a customer relations rep for fictional Trans Global Airlines. The affair is hinted at pretty seriously (especially in the closing moments), but is never really made explicit. This is definitely not the case with hotshot pilot Vernon Demerest (Dean Martin), who is in the middle of an active affair with stewardess (yes, that’s what they called flight attendants in 1970) Gwen Meighen (Jacqueline Bisset), who has just discovered that she is pregnant with Vernon’s lovechild.

On top of this, TGA has discovered Mrs. Ada Quonsett (Helen Hayes, who won a Supporting Actress Oscar for this), a habitual stowaway on TGA flights. She is put under guard (kind of) to be sent back to San Diego but manages to slip by and hops onto a flight to Rome. As it happens, this is the same flight that Vernon and Gwen are on. And there’s an additional passenger: D.O. Guerrero (Van Heflin) an out-of-work contractor who has decided to blow up the plane over the Atlantic after taking out a massive insurance policy.

So, yeah. All of those plots happen in and around the same airport on the same night. Eventually, it becomes a race against time between getting the ditched airplane off the runway so that the crippled aircraft co-piloted by Vernon can land on it. We get some resolution for a couple of the stories, but the failing marriages are left up in the air, although there’s some good evidence that Mel will end up leaving his wife for Tanya, and the same might happen with Vernon and his wife.

So let’s jump into the heart of this. Like most disaster movies, Airport is massively melodramatic. I fully expected after half an hour or so to have the overly dramatic theme music switch to a vintage soap opera organ. This movie more than any other is the one being spoofed in Airplane!, and most of the jokes in that spoof are dead on from what we’re given to watch here. Everything is emotionally heightened all the time, and no one hams it up the way George Kennedy does when he’s trying desperately to move the aircraft off the runway while chomping on a massive unlit cigar.

As I said, a lot of this film seems to be an advertisement for Boeing aircraft and the 707 in particular. When the crippled plane is coming in, there’s almost no tension as it approaches the runway because we’ve been told over and over how good the 707 is. In fact, at one point we’re even given a short primer on the design of the plane and why an explosion, while serious, probably wouldn’t cripple it.

I’m not prepared to say that Helen Hayes deserved the Oscar for this role, but she is absolutely the best part of the film. Maureen Stapleton, playing the wife of the suicidal briefcase bomber was also nominated. I see the rationale for her nomination much less; mostly, she cries and looks catatonic.

Anyway, this film is pretty goofy in a lot of respects. I have a hard time saying I actually enjoyed watching it, although I didn’t hate it. I was ready for it to be over a lot sooner than it was, though.

Posted by SJHoneywell at 8:55 PM