Film: The Country Girl
Format: DVD from NetFlix on laptop. 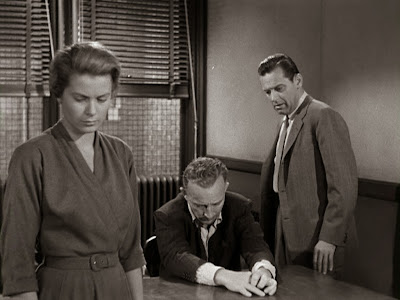 It’s always a little bit of a surprise to me that I like Bing Crosby as an actor. I do, though. Crosby is easy to like, especially when he’s playing a nice guy priest or a lovable rogue across from Bob Hope. This made The Country Girl an interesting experiment for me. I like Crosby, but I’ve only seen him in musical and light comic roles. How would he fare in an actual drama acting alongside Grace Kelly and William Holden?

I didn’t expect a drama, honestly. This is the only straight drama I know of in Crosby’s career, although I’m sure there are others. I know him from films like High Society, Going My Way, and the “Road to…” movies. Playing a washed-up alcoholic actor feels out of his wheelhouse, and yet that’s where we are. In a sense, there’s an interesting parallel between the film’s story and the film’s reality. In the film, a Broadway production depends almost entirely on the performance of this has-been actor while The Country Girl itself hangs entirely on the performance of a guy best-known and most comfortable crooning over a piano and cracking jokes at the camera.

Director Bernie Dodd (William Holden) needs a new star for a difficult and unusual production. Against the wishes of his main backer (Anthony Ross), Dodd auditions Frank Elgin (Bing Crosby). Elgin seems a natural for the part, but he’s been out of stage work for some time and has a reputation as a drinker. Dodd stumps for him, though, and offers Elgin a two-week contract to take them through their short run in Boston, with the hopes of a full contract on the show’s return to New York. Frank leaves the audition and heads home; Dodd follows. What we get here is evident to pretty much everyone watching except for Bernie Dodd.

Frank Elgin wants the work, but is concerned that he’ll be able to learn and perform such a difficult role. His wife Georgie (Grace Kelly) is also concerned, but more than anything wants her husband to work and regain his confidence. Dodd leaves it with them, and if Frank doesn’t take the role, we don’t have a movie. Later, Frank gives us his interpretation of the events in the apartment. He needs to pretend that he needs Georgie’s help so that she has something to live and work for. Since the death of their young son a few years earlier, Georgie has had fits of depression and drinking and even suicide attempts, according to Frank.

And so the show goes to Boston, and Frank is up and down, sober and drunk, all the while with Georgie pushing him one way and Bernie pushing him another. It’s evident that Georgie and Bernie dislike and mistrust each other, that is until Bernie learns Georgie’s side of the story and of the last several years of her life with her husband.

Straight out, there’s a lot here to enjoy. My main concern was seeing Bing Crosby playing a genuinely serious role since he seems so natural in light comic work. Of course, the same could be said for Frank Sinatra, who I almost always like in dramatic parts, and in fact who I like more in dramatic parts than in musical ones. Crosby gets the chance to sing a couple of numbers here, although they are within the context of the stage play, and thus work completely without damaging the continuity of the story. Crosby, who was nominated for the role, is very good. So too is William Holden, who I tend to like as a general rule.

But in a lot of ways, this is as much Grace Kelly’s picture as anybody’s. Kelly was one of the most beautiful and glamorous stars of her era, but Georgie Elgin, at least for the bulk of the film, is a woman who has aged far beyond her actual years. It would be difficult to make Grace Kelly unattractive, but here she is merely pretty without being the spectacular beauty she truly was. It humanizes her. More, she brings wonderful tragic touches to the character, letting her real self and her real opinions out only when it is safe to do so. Throughout we can see her almost physically holding in her true feelings because that is what Frank needs her to do.

The Country Girl could have very easily gone off the deep end of things, but it doesn’t ever do so. This is a story that could slide heavily into maudlin melodrama with the lightest push, but it maintains its position of being instead an actual drama about real people instead of caricatures. There’s a real darkness here lurking very close to the surface. We get glimpses of it now and then, but the film is smart enough not to revel in it.

This is good stuff. A few days ago, I listed a series of films that I thought should make it to the 1001 Movies list and The Country Girl wasn’t on it. That’s only because I hadn’t seen it yet. I’d say there’s a solid chance of it making next year’s list of suggestions.

Why to watch The Country Girl: Much darker and harsher than you’d expect.
Why not to watch: Nagging worries that Der Bingle can’t pull off a real drama.