I Feel the Earth Move Under My Feet 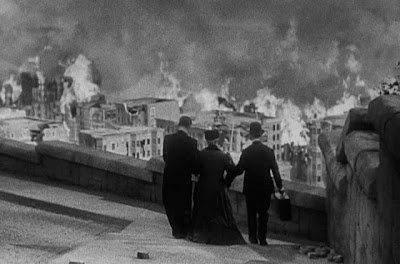 Spencer Tracy was nominated for Best Actor for San Francisco, so it would be understandable from my perspective to think that perhaps Tracy would be the central character of the film, or at least one of the central characters. Imagine my surprise when it turns out that the leading players here are Clark Gable and Jeanette MacDonald. Tracy, at best, is the fourth player in the film and is only on screen for a small percentage of the running time. This is a weird episode with the Hays Code, I think. Since Clark Gable, by all rights the main actor in the film, plays a scoundrel, it’s almost as if he didn’t deserve to get the nomination.

Our film starts a bit before the great San Francisco earthquake of 1906. We’re introduced to Blackie Norton (Clark Gable), who runs the Paradise Club in the Barbary Coast section of the city. It’s a rough part of town, filled with clubs, drinking, and illegal gambling, and Blackie is very much one of the kings of the area. Into this mass of humanity, sin, and depravity wanders Mary Blake (Jeanette MacDonald), an opera singer from Colorado looking to make her way in the city. She winds up at Blackie’s club because her building has burned down and she needs a singing job. After a tryout and a quick ogle, Blackie hires her.

Mary makes a huge impression on the club pianist (Al Shean) and Blackie’s good friend Mat (Ted Healy) thinks she’s too good for the club, too. This is a sentiment shared by Father Tim Mullen (Spencer Tracy), Blackie’s boyhood friend and a man who has spent his life trying to get Blackie to try religion. It’s also a sentiment shared by Jack Burley (Jack Holt), who owns and operates the Tivoli Opera House, also located in the Barbary Coast area. Soon enough, Blackie and Jack Burley become rivals both for Mary’s personal affections and her singing talents.

And really, that’s the whole movie. Mary is pulled this way and that way by both Blackie and Burley, unable to decide where she wants to end up. Her professional side leans toward Burley because opera is her passion and singing torch songs in Blackie’s club is beneath her talent. But her heart leans toward the lovable, attractive rogue who has his charms despite his evident atheism (and you know where this is going to go) contrasting with her upbringing as the daughter of a minister.

Eventually, both Blackie and Burley attempt to damage each other’s business. Blackie offers to let Mary out of her contract, but when she attempts to take her up on it, he reneges and goes to shut down the opera. He relents, swayed by the power of her voice. Burley, for his part, manages to get the Paradise Club shut down and all of Blackie’s performers arrested. This not only sets Blackie up for a year in prison, it also effectively prevents his run for a supervisor position to institute reform in the Barbary Coast area.

Everything eventually comes to a head, with Mary still vacillating between the two men until the great earthquake hits. The last section of the film is concerned with both the earthquake and the aftermath and generally follows Blackie around the devastated San Francisco looking for Mary to make sure that she’s still okay.

I still have trouble believing that the Best Actor nomination here went to Spencer Tracy. Don’t get me wrong—I like Spencer Tracy in general, and he plays this role about as perfectly as he could have. But it’s such an insubstantial role overall. With the exception of his first scene or two, Father Tim exists only to moralize and to tell Blackie what a lousy person he is despite Blackie being in many ways the most generous and decent person in the entire film (Father Tim and the religious Mary included). Tracy is on screen for maybe 20 minutes, and that’s stretching it. If anyone deserved an acting nomination here, it was Clark Gable, who almost seemed to be tuning up for his turn as Rhett Butler a few years later.

So how’s the music? Eh, it’s not really my style. I’ve said before that Jeanette MacDonald had surprisingly good comic timing, but that’s not evident in this film. Sure, she was a talented singer and she was knock-out gorgeous, but I have trouble taking her seriously as a dramatic actress. She doesn’t have the gravitas to pull off a serious role like this. It’s evident that she was hired for her voice, but I just don’t buy her in the film or that she seriously considers the marriage proposal of Jack Burley, who turns out to be a thug.

Of course, as a product of its time, our atheist protagonist needs to eventually fall to his knees and thank God for Mary surviving the earthquake—that’s not a spoiler because anyone watching knows it’s going to happen by the end of the film. It’s one of those things I always find interesting about religion in general. Blackie, after a lifetime of non-belief, is suddenly willing to thank a higher power for Mary’s survival but seems completely unmoved by the thousands of deaths around him, including the deaths of a number of people important to him. It rings hollow, and while it may have played in 1936, it doesn’t play today.

San Francisco is an interesting film, but it’s not one that I think warrants a great deal of attention. It’s worth seeing for Gable, who always played this sort of character well. If you like opera, there’s some scenes worth seeing, or at least hearing. Otherwise, there’s not a lot here.

Why to watch San Francisco: The earthquake is worth it.
Why not to watch: It takes a long time to get to the earthquake.