Off Script: Near Dark 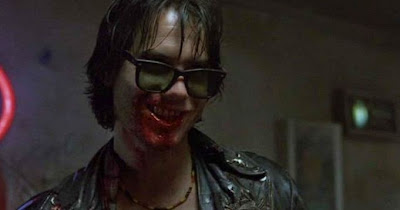 When I first started blogging, I made the decision to rewatch everything I was going to review. That’s resulted in some pain more than once, of course, but it’s a decision I stand by. While plenty of my opinions have remained the same over the years, a number of my opinions have shifted one way or the other. With a film like Near Dark, I’m happy to have maintained this position of rewatching before reviewing, because this is a film that has not aged as well as I would have liked it to.

The premise is appealing on its face. Caleb Colton (Adrian Pasdar), a young red-blooded Oklahoman, encounters a drifter named Mae (Jenny Wright). The two spend the night together, mostly with Mae acting oddly and Caleb attempting to get something going with her. As dawn approaches, Mae panics, demanding that he get her home. He stops a mile or so from where she is staying and demands a kiss. She agrees, and finishes the kiss with a bite on Caleb’s neck, because as we’ve known all along, Mae is a vampire. And, now that the sun is up, Caleb’s flesh starts burning in the sunlight, so he rabbits home, but is picked up by Mae and her drifter family just as he nears his house.

This introduces us the rest of the Mae’s group of bloodsuckers, of which she is nothing close to the leader. That position is clearly held by Jesse (Lance Henriksen), who has been a vampire long enough that he fought in the American Civil War. His closest companion is Diamondback (Jenette Goldstein), who is more or less his mate. While Jesse is the brains, the muscle is provided by Severen (Bill Paxton), whose first thought is to kill Caleb immediately. Rounding out the crew is Homer (Joshua John Miller), whose approximate physical age is 12 or so. Mae reveals that she’s bitten Caleb, so Jesse agrees to give him a week to learn to hunt and kill, and thus fit in with the vampire crew.

Caleb finds that he’s unable to kill, though, which means that Mae kills for him and then feeds him from her wrist. This certainly doesn’t endear him to the rest of the crew, who generally still want to kill him. These feelings intensify when Caleb refuses to kill the last survivor of the gang’s attack on a redneck bar in the middle of nowhere. That survivor naturally goes and finds the police, but Caleb risks his unlife to save them, which gains him another week. Meanwhile Caleb’s father (Tim Thomerson) and sister (Marcie Leeds) are hunting everywhere for Caleb. And, because this is a movie, one night everyone is staying in the same motel. And worse, Homer has decided that just like Mae has chosen a mate, he wants Caleb’s sister.

Near Dark is pretty inventive in a lot of ways and it brings in some interesting dimensions into the idea of the vampire story. But, too much change is never a good thing, and the film makes some serious alterations to vampire lore. Essentially, Caleb ends up returning home and, based on nothing beyond the fact that his father is a vet, decides that maybe the way to cure his vampirism is a blood transfusion. Good thing everyone in the family has the same blood type.

There are some high quality scenes here. The scene in the bar is absolutely the high point of the film and turns entirely on the performance of Bill Paxton, who displays what might well be his best couple of minutes on film. He comes close to matching that in his final confrontation with Caleb near the end of the film. Both he and Henriksen are as menacing as they have ever been, Paxton by being completely out of control and Henriksen by being completely in control. They, more than anything, are the reason this film holds up at all.

That said, my memory over the last few years was a lot kinder to Near Dark than it probably deserved. It’s a vastly entertaining film, but it falls down hard toward the end. Even giving up the coincidence of both Caleb’s family and the vampire crew staying at the same motel is forgivable, but once the third act starts with Caleb “recovering” from vampirism, we’ve gone off the script and the ending is absolutely a known quantity a good 20 minutes before we get there. That’s a shame, because up to that point, the film moves at a good clip and has some great horror moments.

This is still a good movie, but it’s not the movie I thought it was. It’s sad when that happens in the negative, but it does happen, which is why these movies are worth watching a second time. If you haven’t seen Near Dark, it’s worth seeing. If you have and it’s been awhile since you’ve seen it, watching it again comes with the risk of being disappointed.

Why to watch Near Dark: An unusual vampire story.
Why not to watch: The third act goes places vampire stories shouldn’t.