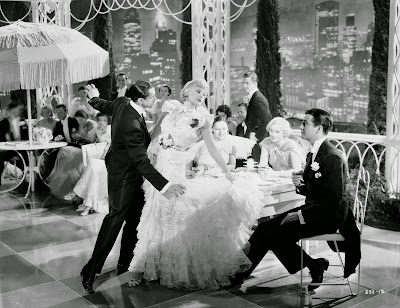 Line up the Best Picture winners end to end, and one the bottom in my opinion is The Broadway Melody, the second winner ever. That being the case, I can’t say I was excited to sit down and watch Broadway Melody of 1936. However, the DVR is getting full, which means I need to get through some of the older stuff to make room for what I want to record in the next couple of months. And so, Broadway Melody of 1936 it is.

What I didn’t know going in is that this would be my first exposure to Eleanor Powell, who had a terribly short film career. There’s a pretty strong case to be made for the idea that Powell stopped getting work because she was something like a threat to many of the other dancers of the time. Oh, I don’t mean she came at them with switchblades or anything, but Eleanor Powell was a real talent. Gene Kelly once said that when Fred Astaire danced with Ginger Rogers, it was the only time you watched the man. Well, I’ve seen clips of Powell dancing with Fred Astaire…and when they’re on stage together, you watch her. She’s as good as he is. Maybe better, because she’s doing exactly what he does and doing it as fast, as on the beat, and in heels.

So yes, there’s a shining bright spot in Broadway Melody of 1936 and it goes by the name of Eleanor Powell. There’s more worth mentioning here, but Powell is the main sell and the main reason to watch. At its heart, this film is a pretty standard feel-good musical from the mid-1930s. We get a romantic plot set up immediately and a “let’s put on a show” plot set up, too. And there’s little doubt that the romance will end up working the way we want it to and that the person we want to have a stage career will end up being the talk of the town. That’s how these work, and that’s what we sign up to see.

Bob Gordon (Robert Taylor) is a Broadway producer looking to start up a new show. He finds his angel in the person of wealthy young widow Lillian Brent (June Knight), who has more than just financial backing on her mind. There’s evidence of potential romance here. Furthermore, Lillian wants to expand herself on the stage and decides that she’ll pull her backing if she doesn’t get the lead role despite being an amateur. Meanwhile, gossip columnist Bert Keeler (Jack Benny) has been called on the carpet and told that he needs to stop writing about upcoming baby announcements and start digging up some real dirt to sell newspapers. He and his assistant Snoop (Sid Silvers) have been tasked with essentially making themselves to most hated men on Broadway in an effort to dig up the scandalous underbelly of the Broadway scene.

Into this walks Irene Foster (Eleanor Powell), who happens to be Bob’s high school sweetheart. She wants to be on stage, and Bob is her ticket there. Sadly for her, Bob has decided that Broadway is no place for Irene and he refuses to hire her, thinking instead that she should go back home to Albany. Bob’s secretary Kitty (Una Merkel) thinks Irene is getting a raw deal.

There’s nothing Kitty can do about this until she discovers the truth behind the latest Bert Keeler columns. Looking to get a little payback on Bob, Keeler invents a new French stage sensation named Madame Arletty, taking the name off a box of cigars. Of course, there is no Arletty, but this doesn’t stop Bob from pursuing the French “sensation.” Kitty figures this out and sets up Irene to actually be Arletty, which will allow her to be hired and perform against Bob’s wishes.

So, it doesn’t take an experienced movie watcher to know how this is going to come out. Irene will fool Bob for long enough to get the part, he’ll eventually figure out that he’s been duped, and everything will end happily except for the pushy Lillian Brent, who we’re not supposed to like in the first place. Again, once the plots have all been set in motion, there’s only one way for this film to end based on when it was made.

The bright spot here is Powell’s dancing. She pulls off a couple of numbers that are real show-stoppers, particularly at the end of the film. Powell needs to be seen to be believed. I’d happily watch far worse movies than this one to get a few minutes of her on stage because she’s worth a bad plot and some crappy acting the minute she puts on her tap shoes. This is also the screen debut of Buddy Ebsen and his sister Vilma as a Vaudeville act that befriends Irene. For what it’s worth, Buddy Ebsen was cool enough to pull off a Mickey Mouse sweatshirt in 1935, and that’s pretty damn cool. They’re both great and serve as a nice complement to Powell.

I should also mention Jack Benny and sidekick Sid Silvers. Both are a lot of fun. Snoop is kind of a stupid flunkie who makes a number of entertaining mistakes throughout the film. Often, I dislike comic relief characters, but Snoop is wildly entertaining all the way through. Ditto for Una Merkel, who gives her role just the right blend of wanting to see things work out and hard-bitten cynicism.

This is not a perfect film by any stretch. Too much time is taken up with the man who wants to be in shows as a snoring sound effect, for instance. And the plot is too easy to navigate to really make it worth noting.

That said, you could do a lot worse. You should watch Eleanor Powell tap, because there’s nothing quite like it, and there’s enough here beyond her to make this an easy pill to swallow.

Why to watch Broadway Melody of 1936: Eleanor Powell is a national treasure.
Why not to watch: The sap is laid on thick and fast.

Posted by SJHoneywell at 7:52 PM