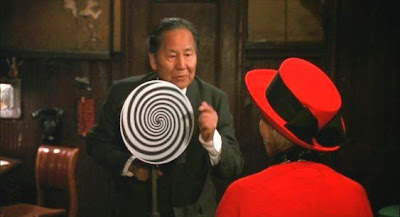 My experience with Woody Allen films is that I tend to like them. There have been a few Allen films that I haven’t enjoyed much, but usually I look forward to watching one of his movies. NetFlix, however, seems to dislike Woody Allen, since a surprisingly large number of his films aren’t available either streaming or on disc. When a couple of these unavailable films showed up streaming for a short time, I figured I should get them watched. Alice was among these. This film is described as Woody Allen’s take on Alice in Wonderland, and I see the connection, even if that connection is tenuous. This is very much a film that lives in the world of magical realism.

Alice Tate (Mia Farrow) is a vapid socialite housewife living in New York. Her day consists of getting manicures, buying stuff that she doesn’t need, and instructing the nanny on how to deal with her children. Her husband Doug (William Hurt) makes a lot of money and generally ignores his family. Alice is more or less there to make him look good and host parties for him. As the film begins, Alice has more or less started to realize that her entire life is an afterthought. At this same time, she meets Joe (Joe Mantegna), a divorced saxophone player whose child goes to the same pre-school as Alice’s. She’s immediate attracted to him, which manifests in guilt and back pain.

Unhappy with her life, Alice decides to go to a Chinese healer (Keye Luke) who specializes in alternative medicine, specifically with a series of herbs and hypnotism. As it happens, since this is magical realism, these herbs give Alice a series of unusual experiences. She becomes sexually forward with one set, turns invisible and spies on Joe having sex with his ex-wife with another set, and meets her dead ex-lover (Alec Baldwin) and flies around the city with him with her third dose. But it all comes back to the idea that she is bored with her life and thinks that her life has become meaningless and empty.

I’m not going to go into a great amount of detail here. The film is more or less Alice attempting to ferret out some meaning for her existence, and in true Woody Allen fashion, this ultimately comes to us in the form of existentialism and sex. In almost every way imaginable, Alice is the female version of the sort of characters Allen himself plays in his own movies; If this film were written from a male perspective and called Allen or Albert, we’d see Woody Allen’s stereotypical neurotic character going through the same search for meaning and sexual blunderings and guilt feelings about infidelity.

In almost every respect, Alice is a film that fits perfectly into its era. This is almost a stereotypical Reagan/Bush-era film. We deal only with people who are staggeringly wealthy and self-absorbed (with the exception of Joe the saxophonist, who is nonetheless doing well for himself. He’s just not at the level where he can buy $9,000 wicker baskets for the hell of it the way Alice can). Everyone in this film is the sort who has everything money can buy but still experiences nothing but angst because of the meaninglessness of their material wealth. All of these characters, again with the possible exception of Joe and possibly Alice’s sister (Blythe Danner) are not only wrapped up in their own materialism, but are completely satisfied with their meaningless lives. That Alice comes to some sort of minor epiphany happens only because the script needs for it to happen. That she does ultimately discover some meaning in her life happens similarly because it is required by the screenplay. That’s not character growth; that’s plot device, and it’s shoddy when it comes from a screenwriter who has proven his talent many times in the past.

Man, does this sound familiar to you at all? It sure as hell did to me, and sitting through the entirety of this film was painful. I had it generally pegged within the first 10 minutes. Sure, I was wrong on some of the specifics, but I knew the broad strokes of where we were going and how we would get there more than an hour before the final credits scrolled up the screen. With a screenwriter and director as generally talented as Woody Allen, that’s hugely disappointing.

What it ultimately comes down to for me is that Woody Allen spent years mining the same material. There’s nothing (aside from the magical realism) in this film that isn’t essentially in something like Annie Hall. It’s more or less that by the time he’s explored these same concepts over and over that he’s mined every productive vein of ore that he can. There’s very little here that he didn’t say better somewhere else and that wasn’t more entertaining and more meaningful somewhere else.

Not everyone bats 1.000. I expect even directors and screenwriters who I like and admire to come up short now and then. That doesn’t make it any less disappointing when it happens, though, and ultimately, Alice was simply disappointing. 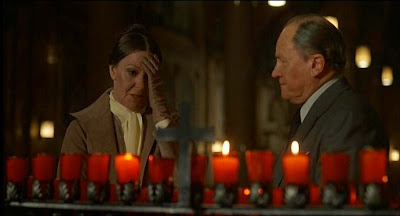 Interiors, on the other hand, is precisely what one thinks of when it comes to a Woody Allen screenplay. Before this film, Allen was known exclusively as a comedian and a comic writer. Interiors is his first foray into truly serious drama, and it’s a hell of an introduction. Like most Woody Allen films, it features a magnificent cast. In contrast with Alice, it also feels a screenplay worthy of Allen’s name and characters that come across as real people.

In fact, Interiors explores a lot of the same territory as Alice. As I said above, Alice feels like Allen going to the same well one time too many. Interiors is very much his first trip to that well, and it shows. Interiors is blessed with depth with rich, realistic emotional moments that resonate both in the film and in reflection afterward. It’s almost as if Allen saved up years of material and moments that he couldn’t mine for comedy and placed them all in this film.

Arthur (E.G. Marshall) and Eve (Geraldine Page) are an older couple with three grown daughters. Renata (Diane Keaton) is as successful as a poet can be in 1978 and is married to Frederick (Richard Jordan), a writer who is far less successful than she is despite showing early promise. Flyn (Kristin Griffith) is an actress who tends to be in terrible movies, which is a source of amusement to the rest of the family behind her back. Joey (Mary Beth Hurt) lives with Mike (Sam Waterston), who works in politics. Joey deals with Eve’s various neuroses and is otherwise directionless.

The bombshell drops one morning when Arthur announces at breakfast that he wants to separate from his wife for at least a short time. This comes across as a shock to everyone (including the audience) until we see the film continue and begin to understand Eve’s various mental and emotional issues. This trial separation sends Eve into a tailspin, a crash that includes an unsuccessful suicide attempt. Despite this, Arthur heads off to Greece and returns with Pearl (Maureen Stapleton), whom he intends to marry once his trial separation with Eve turns into a permanent divorce.

There was potential for Allen to turn this into a comedy, or at least a drama with a number of comedic elements. Instead, he goes directly for the heart of things. One of the most interesting choices, an unusual one in general and particularly for a director with such a dedicated love of jazz, is that Interiors has no soundtrack except for a single scene near the end. Where moments could be turned to comedy, Allen instead keeps us focused on the drama of a family dealing with a sudden change and the boiling emotions that come from this.

Interiors is a very smart film because it is smart emotionally. I’ve been through a parental divorce and remarriage as an adult, and a great deal of what Allen shows here is similar in a lot of ways to what I experienced as an adult child of divorce. I’m not going to go into a great amount of detail here. I’m just going to say that I understood the emotional reality of all three of the daughters even if I can’t express those in actual words. I doubt the characters could, either.

Another smart move here is the deglamorization of virtually all of the characters. Flyn is presented to us as an actress who trades almost entirely on her looks, but here she is presented as not unattractive but hardly as what we’ve been led to believe. Diane Keaton, who the year before was achingly desirable in Annie Hall looks weathered and worn here. Joey, living so much in the shadow of her mother, is pinched and small. In fact, only Sam Waterston’s Mike and Maureen Stapleton’s Pearl are characters who present something other than their rawest surface emotions.

The title comes from Eve’s career as an interior decorator, but the real connection to the rest of the film’s story doesn’t come until the end. When Arthur and Pearl are married in a small ceremony, Eve eventually arrives. Joey speaks with her and brings up those perfectly scripted rooms, interiors that left no room for any emotion. It’s maybe a long way to go for a title, but it works beautifully.

If there’s a down here, it’s that there is nothing uplifting or nice or even fun about Interiors. It’s pure and raw emotion all the way through. It’s like an open wound and virtually everyone is existing in those emotions right on the surface where everything is sensitive and painful. It’s the accuracy that is most impressive to me; watching the three daughters watch their father dance with his new wife is a film moment I won’t soon forget because I’ve been there and because the looks on their faces is exactly how it felt in that moment.

Why to watch Alice: Because Woody Allen writes good scripts.
Why not to watch: Almost everyone in this film is hateful.

Why to watch Interiors: This is what Woody Allen should be.
Why not to watch: If you’re expecting comedy, you’re not going to find it.

Posted by SJHoneywell at 9:15 PM