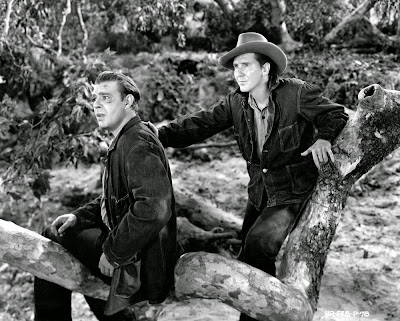 When I wrote up The Grapes of Wrath some time ago, I mentioned the arguments between my brother Tom and my dad about Tom’s reading habits. Dad never failed to push classics on Tom while Tom was much more attuned to reading pulp novels. The book dad pushed the most was, in fact, The Grapes of Wrath. Of Mice and Men is arguably the Steinbeck story that is more famous than the one Dad constantly wanted one of us to read. I’ve still never read The Grapes of Wrath, but I’ve read Of Mice and Men.

Of course, it’s been years since I’ve read it, but I remember the basics of the story. I also remember the Bugs Bunny cartoon with the Abominable Snowman who was based completely on one of the characters from this. This isn’t a story I enjoy much because of where it goes, but I can’t disagree with it being a true classic of American literature.

Anyway, we meet George (Burgess Meredith) and Lenny (Lon Chaney Jr.), a pair of drifters looking for work in California during the Depression. We learn that the two are cousins, which is the only reason that George remains with Lenny at all. Lenny, it is soon evident, is mentally deficient. George and Lenny are frequently on the move because Lenny ends up getting in trouble. Lenny likes to touch soft and silky things, and this causes trouble when those soft and silky things are the dresses on girls.

What the two of them really want is a little ranch of their own, a couple of acres to raise some livestock and grow crops. Lenny’s favorite thing in the world is to hear George talk about the farm they will buy someday, mainly because Lenny knows that he’ll get to tend the rabbits that they will have. After all, rabbits are soft and silky, and that’s what Lenny likes.

With that set up, there’s really only one place for the story to go. George and Lenny always end up leaving jobs because Lenny can’t control himself or his desire to touch things. The two end up on a ranch with a number of things for Lenny to touch, and with a series of other problems. Specifically, there is a problem named Curley (Bob Steele), a guy about half Lenny’s size who likes to pick fights with bigger men. And Curley has a wife named Mae (Betty Field) who likes to flirt with the ranch hands.

There’s a lot more, of course. We spend enough time with three or four of the ranch hands to get to know them a little. Candy (Roman Bohnen) is missing a hand and wants to join George and Lenny, and works his way into their plan to buy land by having a stock of ready cash. Slim (Charles Bickford) is in many ways the leader of the hands, and he takes a liking to George and Lenny and looks out for them despite Lenny’s issues. There’s also Crooks (Leigh Whipper) an ostracized black ranch hand forced to live on his own and bitter because of it.

In the opinion of a lot of critics, 1939 is the best year in American movies, and films like Of Mice and Men go part of the way to making that true. There was little doubt that Gone with the Wind would walk off with the Oscar for Best Picture, but a case could be made for most of the films nominated in this category in this year, or at least a case for them winning in other years.

The biggest part of this is the twin performances of Burgess Meredith and Lon Chaney Jr. Both of them ended up making a number of bombs, particularly Chaney, whose career seemed to live in the grade-Z level basement a lot of the time. Given good material, as he was here and with The Wolf Man, Chaney Jr. could be a very effective actor. Lenny is one of those characters once seen is never forgotten, and this all comes from the performance. For his part, Meredith is actually subdued a great deal of the time, and his pain plays out across his face the entire time. A generation knows him only as Mick from Rocky and as The Penguin from the campy Bat-Man television series, but based on this film, the man had some serious acting chops.

Of Mice and Men, like many stories of The Great Depression, isn’t uplifting at all, but it’s not supposed to be. This is a film that gets down in the muck and the pain and the frustration of poverty and looking for work, the same thing Steinbeck’s story did. Unlike a number of films of the time, this wasn’t about the hoi polloi living it up during a time of great deprivation. No, this is much more about the people sitting in the theater watching, hoping for something better and always getting a kick instead of a hand up.

I should probably re-read the story. I’m a little surprised there was no mention of either Lon Chaney Jr. or Burgess Meredith come Oscar time, and also nothing for the screenplay. All of those seem like potential oversights.

This is not a film I’d choose to watch often, but I’m glad I had the chance to catch up with it. It’s worth your time.

Why to watch Of Mice and Men: Two great performances in a classic American story.
Why not to watch: The ending is the downer of all downers.