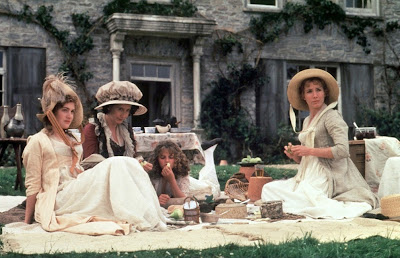 I was asked at work recently to go through our library’s movie collection. Going through it, I encountered Sense and Sensibility, which I knew I needed to watch. It would be a lie to suggest that this was a film I was looking forward to seeing. As I mentioned yesterday, I’m not always the biggest fan of costume dramas, and if I’m completely honest, that goes double for dramatic romances. It feels like there’s so much posturing in so many of these films. People have such blatantly obvious emotions and are forced by propriety or custom to hide them. I find them frustrating. Still, this is one I need to get through, and I learned in doing the 1001 Movies list that it’s often better to rip the Band-Aid off than to let opportunities like this one linger.

Surprise, surprise, Sense and Sensibility is not the tepid little romance I expected, but a film with real depth and with characters that are more than simple cut-outs to hang fancy clothes on. Put bluntly, I expected a slog through drippy romance, and got something far more entertaining than I could have thought possible.

Sense and Sensibility is based on the Jane Austen novel of the same name, which I’ll admit added greatly to my trepidation on putting this one in the spinner. After all, much of the point of this is that the story is a romance of manners, where feelings can only be hinted at and not actually much expressed.

I’ll make the plot discussion here quick, because a lot of the entertainment here comes from seeing how all of the relationships pan out to get us to the ending we really want. Mr. Dashwood (Tom Wilkinson) dies, and unable to split his estate, leaves everything to his son John (James Fleet). Just before dying, he makes John promise that he will take care of his half-sisters and his second wife, since they are left with very little. John does, but is immediately pulled away from that promise by his shrewish and petty wife Fanny (Harriet Walter). The Dashwood women—Mrs. Dashwood (Gemma Jones), Elinor (Emma Thompson), Marianne (Kate Winslet), and young Margaret (Emilie Francois) are thus left with barely enough money to survive and certainly not enough to provide any of them with a dowry.

As they are figuring out their place in the world, the Dashwoods are visited by Fanny’s brother Edward Ferrars (Hugh Grant), who takes an immediate fancy to Elinor. Eventually, the Dashwoods move out to Devon and are set up in a house by the cousin of Mrs. Dashwood. Sir John Middleton (Robert Hardy). It is here they meet Colonel Brandon (Alan Rickman), who falls instantly in love with Marianne, and John Willoughby (Greg Wise), with whom Marianne becomes immediately entranced.

There’s a lot to love here, and I mean that genuinely. Emma Thompson, as is generally the case, is wonderful in this role, and I tend to like Kate Winslet in everything. This also is the sort of role that Hugh Grant seems to have been born to play. And Alan Rickman, so often the villain, gets to play a man of true character and class, and he pulls it off precisely as well as you would think Alan Rickman can do just about everything else. But there’s more. In particular, I love Mrs. Jennings (Elizabeth Spriggs), Middleton’s mother-in-law, who is wildly entertaining. Just as fun are the Palmers (Hugh Laurie and Imelda Staunton). Mrs. Palmer is a busybody who is wildly excited about everything while Mr. Palmer seems to hate almost everything that happens around him, particularly his wife.

It’s also worth noting that this was Ang Lee’s first English-only production, and it matches the sort of standards I tend to think of with Lee’s direction. It’s lust and verdant, and the camera never overstays its welcome on a single shot. Lee has always been a talented director, and while I tend to think of him in more epic tones, he’s naturally suited to a film like this one. The idea of requited but unfulfilled love is also one he comes back to with a vengeance in Crouching Tiger, Hidden Dragon, and I can’t help but think that some of the strength of that story came from this one.

The real joy, though, is the screenplay. This could have easily been a drippy romance filled with Emma Thompson and Kate Winslet pining over men they can’t have. Instead, a great deal of the film is dedicated to their relationship, which is what keeps things interesting. The two women are very different—Marianne wears her heart completely on her sleeve while Elinor is closed off to the point of almost having no visible emotions until the moment she does. It’s a wonderful moment that demonstrates the depth of the bond between the two sisters.

The more I see movies like this one, the more I think perhaps my problem isn’t with costume dramas or even costume romances, but with Merchant/Ivory productions. This one is a solid win.

Why to watch Sense and Sensibility: It’s far more interesting than might be assumed at first glance.
Why not to watch: There’s still an awful lot of pining and people hiding their feelings.