Film: The Bachelor and the Bobby-Soxer
Format: Turner Classic Movies on rockin’ flatscreen. 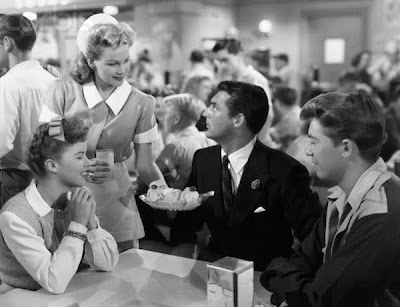 I make no secret of my love of Cary Grant. I don’t feel a need to, really. There’s no shame in enjoying the work of one of the great actors of his era. The thing I like the most about Grant is not that he could pull off an action role or do a serious scene, but that he had nearly perfect comic timing. Given good material, Grant was capable of comedic genius. I’ll say the same thing about Myrna Loy, who I think was underrated in general and that it’s close to criminal that she never got an Oscar nomination. So what a joy to discover that The Bachelor and the Bobby-Soxer features both of these actors. Without knowing it, I was looking forward to this.

We’re given a very unusual meet-cute for our two principle characters. Judge Margaret Turner (Myrna Loy) presides over a case of a small melee evidently caused by the presence of a man named Richard Nugent (Cary Grant). It seems that Nugent, an acclaimed artist, was less a participant in the altercation and more the catalyst, but he has a reputation. Specifically, Nugent has come up on the radar of assistant district attorney Tommy Chamberlain (Rudy Vallee). Nugent is let off, but sternly warned by Judge Turner that she does not want to see him in her court again.

Later that same day, Richard gives a talk about art at a local high school. As it happens, in the audience is Susan Turner (Shirley Temple), a 17-year-old high school student given to sudden fads and deep infatuations. As it happens, thanks to the lecture she becomes deeply interested in art and completely infatuated with Richard Nugent. She manages to finagle an interview with him by claiming to work on the school paper. He does his best to get out of it, eventually lying to her about his past and promising that she could model for him.

Since this is a comedy, we’re going to get some comedic events. In this case, it means that Susan dresses up and sneaks into Richard’s apartment and waits for him. Judge Turner and Tommy Chamberlain (who is making a romantic play for the judge) discover Susan is missing and deduce where she is and show up just as Richard discovers the romantically-inclined intruder in his apartment. We don’t see this happen. We just get the aftermath, which evidently involved Richard punching the assistant DA in the face and thus spending a night in jail. Everything is sorted out by Dr. Matt Beemish (Ray Collins), the court psychologist and uncle of both Margaret and Susan Turner. However, not wanting Richard Nugent to get off completely, they determine that he should “date” Susan until she gets over her infatuation with him. And thus we have the next two-thirds of the movie.

I’m not going to go into that much detail because the plot writes itself. In fact, even if you’ve never seen this, you can guess where it’s going to go. Susan will be completely infatuated with Richard (she calls him “Dickie,” which is a riot), he’ll be put into a series of embarrassing situations, and eventually, he’ll fall for Judge Turner and she’ll fall for him. We’ll need some sort of way to get them together at the end after the inevitable falling out, and that’s precisely what happens in the end. We know where this is going. The joy is the getting there.

The biggest issue with The Bachelor and the Bobby-Soxer isn’t really a problem at all. It’s completely silly from start to finish. Then again, it’s supposed to be. This isn’t a film that wants to be taken seriously for a second. The situation is ridiculous and is designed to put poor Richard Nugent into a series of mortifying situations, mine those situations for as much comedy as possible, and move onto the next plot point. That’s precisely what happens. It builds and builds, ridiculousness on top of ridiculousness until the film can’t sustain it and it finds a convenient way to end.

Grant, of course, is great. A lot of the reason this film works at all is because of the comic timing of Cary Grant, who does a surprised reaction shot better than just about anyone in Hollywood history. It’s also a great role for Myrna Loy, who was a wonderful comic actress, and completely charming here. The biggest requirement for this film to work, though, is a believable Susan (believable as possible, given the plot). Shirley Temple makes the film work. She needs to be precocious and silly at the same time and she makes it work.

This is a harmless film. It’s fun, it’s funny, and it doesn’t overstay its welcome. The fact that it’s completely unrealistic doesn’t matter. It’s not supposed to be realistic. It’s supposed to be entertaining and put a smile on the face of the audience. It does. That’s good enough.

Why to watch The Bachelor and the Bobby-Soxer: The best cast of its year.
Why not to watch: Ultimately, it’s pretty silly.