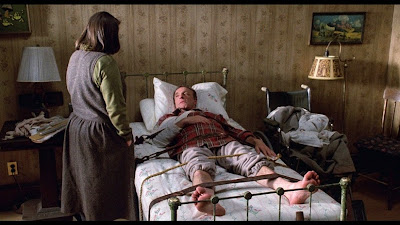 Watch enough movies, and eventually you’ll see some stuff that you just don’t want to see again. Usually, that means a film that I don’t want to watch again regardless of what I thought of it. I don’t plan on watching Salo a second time, for instance, because there are things I don’t want to sit through again and because I think it’s an affront. A film like Idi i Smotri, though, I think is one of the great films of its year but I don’t think I have the emotional capacity to see it a second time. Misery is unique in this respect. I love this film, but there is a single scene I have never been able to watch a second time. If you’ve seen Misery, you know the precise scene I am talking about.

Aside from that one scene, Misery is most notable for being the film that made the nation aware that Kathy Bates existed, and we have to give the movie its props for that. Before this, who knew who she was? After this, who didn’t? Bates’s performance as Annie Wilkes is one of the all-time great out-of-nowhere performances in film history. Bates may have been around before this film, but once she was seen here, she was everywhere.

The story, adapted from the Stephen King novel of the same name, is one of the great adaptations of King’s work in cinematic history, and that’s saying something. With King, the screen results are…uneven, to put it politically. On a good day, we get The Shawshank Redemption or Stand by Me. On a bad day, we get Maximum Overdrive. With Misery, we’re definitely in the first camp.

Author Paul Sheldon (James Caan) has made his living writing romance novels about a character named Misery Chastain. In his eighth (and he hopes final) “Misery” novel, he’s killed off the character with the hopes of doing something more with his talent. His tradition is to finish his books at a remote lodge in Colorado. He finishes his latest work and heads off back to New York directly into the path of a blizzard. It’s not long before he loses control of the car and skids off the road.

“Fortunately,” and those who have seen the film understand the scare quotes, Paul is rescued by nurse Annie Wilkes (Kathy Bates), his self-proclaimed number-one fan. Annie puts Paul up in her house and tends to him, but is so enthralled by the thought of her literary idol being something like a house guest, she fails to let him know that the blizzard has stopped, that the roads are open, and that the phones are working. Instead, she nurses him back to health while Paul slowly realizes that he is becoming less a patient and more a prisoner. Things change for the worse when Annie reads the latest Misery book and discovers the death of her favorite character. Now, fully demonstrating just how crazy she really is, she demands that Paul bring Misery back by writing a new novel; Paul complies because it is the only way for him to stay alive.

Of course, there’s a lot more here than just James Caan lying in a bed with a typewriter. Slowly, as realization dawns on him, Paul starts moving around the house, which is eventually discovered and brings terrible wrath from Annie. Slowly, the tension ramps up, and the film becomes a war of wills between Paul, wanting only to get out and reclaim his life and Annie, desperate to do anything to keep Paul her personal pet. The smartest part of this is the slow realization, first in Paul and then in us, that despite his physical limitations, Paul truly does have a significant amount of power in the relationship.

I’m not going to play here. I hinted at this at the top, but I’ll say it out right now: I like Misery a lot and wish it were a film that got more love. This is one of those films that I think a lot of people see once and remember as being really good but tend not to go back to and watch a second time, and it’s a film that very much deserves being seen again. A large part of this is the performance of Kathy Bates, who plays Annie Wilkes like a second skin. Bates is capable of changing the mood of a scene from happy to terrifying with a raised eyebrow or a downturn of her mouth. Annie is one of the most terrifying screen creations in film history. Bates’s performance is so good, in fact, that she overshadows one of the best performances of James Caan’s illustrious career.

So let’s talk about that one scene. As I said at the top, if you’ve seen this film, you know exactly what that scene is. When Annie discovers that Paul has been out of his bed and as discovered some of her secrets, specifically that a number of mysterious deaths have followed her career as a nurse, she retaliates brutally. In short, she puts a board between Paul’s lower legs and then smashes his ankles with a sledgehammer. It’s sudden, brutal, and remains one of the most horrifying things I have ever seen in a movie. It is in many real ways, the 1990s version of the Alien chestburster. I’ve seen it once despite seeing Misery multiple times. I’m guaranteed to look away from the money shot.

It’s also worth noting that the screenplay for Misery, which went unnominated, is extremely accurate to the book. I used to be a big fan of King’s fiction, and “Misery” is one of his better books in my opinion. This is a book that I haven’t read in some time, but I have vivid memories of significant scenes. The movie naturally leaves out a number of scenes which would be unnecessary in the film (at one point in the book Annie cuts off Paul’s thumb with an electric knife), but it maintains the tension and the horror. The changes that are here—the dreaded hobbling scene happens with an axe instead of a sledgehammer in the book—are actually more horrifying in the movie.

In short, Misery is exactly what an adaptation of a horror novel should be. It maintains the spirit of the original work as well as the main and most terrifying parts of the story itself. It’s also fantastically cast and acted. I love the appearance of Lauren Bacall as his agent and Richard Farnsworth as the local sheriff. I also appreciate a role here for Frances Sternhagen, who is a terribly underappreciated actress. Even the song over the closing credits (“I’ll be Seeing you”) is inspired. But this is Kathy Bates’s film from the first five minutes until the closing credits. Once seen, she’s the sort of screen villain that will haunt your dreams for the months that follow.

Why to watch Misery: Kathy Bates, of course, but for most other reasons, too.
Why not to watch: The hobbling scene risks making your lunch return suddenly and violently.

Posted by SJHoneywell at 5:25 PM