You May Already Be a Winner 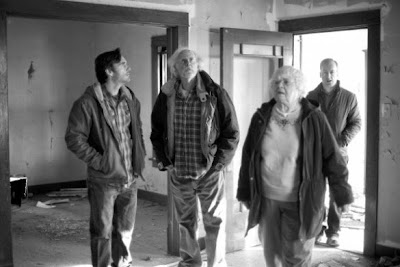 Fulfilling the new movies placed on the 1001 Movies list has meant frequently taking breaks from my regular Oscar posting, which is kind of frustrating to me. I set particular goals for myself monthly, and deviating from that makes it harder to hit those goals. So, a film like Nebraska that appears on the new 1001 Movies list and also knocks out some Oscars for me is a good thing, which is why I saved this one as the last of the new 1001 additions. So, once again, I’m done with the 1001 Movies list, all 1167 of them.

I imagine that Nebraska tells a story that many people with aging parents can relate to. I am fortunate in that this is not something that reflects my life at all. My father will be 80 in January and my mother is a couple of years younger than he is. Both of my parents are in good physical and mental health. Neither seems to have lost a step mentally, and from what I remember of my dad’s parents and what I absolutely know of my mom’s, the same was true of them up to the moment they died.

Woodrow “Woody” Grant (Bruce Dern) has received a letter from, essentially, Publishers Clearing House indicating that he has won $1 million (and in small print he’s won provided his numbers match the winning numbers). Woody is no longer completely stable mentally, and is convinced that he’s won no matter what the letter actually says. Since he can no longer drive and refuses to trust “his winnings” to the postal service, he decides to walk from Billings, Montana to the prize office in Lincoln, Nebraska.

This causes a number of problems for Woody’s wife Kate (June Squibb) and his sons David (Will Forte) and Ross (Bob Odenkirk). Unable to convince Woody that he hasn’t actually won anything, David eventually agrees to drive his father down to Lincoln to collect his winnings, if only to get the man to stop wandering off. Along the way, David deals with Woody’s alcoholism and Woody’s past indiscretions, family squabbles, and old feuds with friends and former business partners in Nebraska. This includes a family reunion that goes spectacularly wrong, physical assault from deadbeat nephews, and a confrontation with an old business partner named Ed Pegram (Stacy Keach) who demands a share of the money to settle some old scores.

Director Alexander Payne’s decision to film in black-and-white is an interesting one, and I think the right one. I’m not sure this film would have the emotional resonance it does filmed in color. The crisp visuals help convey a stark landscape (if you’ve ever driven through Nebraska, you know what I mean) and put the characters and their past into focus.

By far the best character here is June Squibb’s Kate Grant. Every step that Woody has lost mentally, either due to age or drinking (or both) Kate has retained. She brooks no bullshit from anyone and also gets the best lines. Not all of the humor comes from her, but most of the best moments do. I understand perfectly why she didn’t when a Best Supporting Actress Oscar for this role, but she absolutely deserved the nomination for being the rational center of a film that swings on wildly emotional arcs.

Of course, it is Bruce Dern who is the center of attention here, and I’d be hard-pressed to think of when he’s been better in a film. This comes with the caveat of my admitting that I’ve never been a huge Bruce Dern fan. I like him fine, but he’s not an actor I go out of my way to watch. This performance, though, is incredibly natural and believable all the way through. Dern’s portrayal of Woody Grant feels like the real thing.

I mentioned a couple of days ago the idea of comedians playing serious roles. That’s the situation here with both Will Forte, who got his start on Saturday Night Live and with Bob Odenkirk, a staple on The Larry Sanders Show and one of the minds behind Mr. Show. Both play their roles with a kind of reserved, frustrated anger with both of their parents. It’s also completely real. I bought into both performances completely, particularly Odenkirk, who manages to pull back his often broadly comic persona into something much more subtle. There are moments when Forte feels a little wooden, but he makes up for this in other moments of being real.

Nebraska is the sort of film I don’t know that I will need to see again for a very long time, but it’s a film I’m happy I got the chance to see. It’s beautifully written in no small part because it feels so completely real all the way through, something that Payne seems to specialize in doing. It’s an impressive piece of work from all involved.

Why to watch Nebraska: All the comedy and all the drama of watching one’s parents grow old.
Why not to watch: Parts are very frustrating.