Lust in the Dust 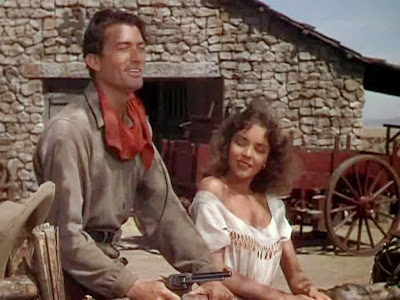 Anyone who has worked on a group project knows that there’s often a benefit to having the suggestions of other people. Sometimes, though, other people turn out to be much more of a hindrance than a help. In the case of Duel in the Sun, King Vidor is give the sole directorial credit, but there are six uncredited directors on this film. Six. I can only imagine that at some level, this led to a “too many cooks” situation.

This is exacerbated, at least for me, by the fact that this film stars Jennifer Jones, who tends to leave me cold. This is balanced by it also featuring Joseph Cotten, Gregory Peck, Lillian Gish, and Lionel Barrymore. Still, I specifically watched this because Jones was nominated for Best Actress for this film, so she was the main reason I spent time with Duel in the Sun in the first place.

It starts so oddly, at least in terms of what I expected. We get a prologue, and then, after the music starts, we get an overture of more music with a bizarre voiceover that tells us all about the movie we’re about to see. And then, once the overture stops, we get a voiceover narration (from Orson Welles, no less) telling us exactly what’s going to happen in the story we’re about to see. So it’s a good 8-10 minutes into the movie that the movie actually starts.

Pearl Chavez (Jennifer Jones) loses her parents tragically when her father (Herbert Marshall) shoots her mother when he catches her with a lover. Scott Chavez is set to be executed, so his last action before being hanged is to send Pearl off to live with his second cousin and former flame, Laura Belle (Lillian Gish).

It’s here that we meet the rest of the principal cast, namely Laura Belle’s sons and her husband. Son Jesse (Joseph Cotten) is the good son—intelligent, educated, and well-mannered. Second son Lewton (Gregory Peck) is the wild child, indulged by his father and willing to take what he wants. The father is Senator Jackson McCanles (Lionel Barrymore), who takes an immediate dislike to Pearl. Part of this is because he considered her father to be a serious rival for Laura Belle’s affections. The other reason is that Pearl is half-native, which makes her persona non grata in the senator’s eyes.

Of course, both Jesse and Lewt are attracted to Pearl and she is attracted to both of them. She actually likes Jesse because he is a gentleman and respectful. She genuinely dislikes Lewt, but finds herself unable to resist him. Of course, he essentially forces himself on her repeatedly, so maybe it’s a good thing that she’s kind of into him. I don’t know—it’s pretty icky. Pearl would like to be pure, but she’s got a body built for sin, something she’s essentially told by Jubal Crabbe (Walter Huston), a traveling evangelist who calls himself the sinkiller.

Everything changes when Jesse sides with railroad men against his father in a dispute. He is summarily dismissed from the family ranch and heads to Austin to make his fortune. This breaks Pearl’s heart, but she’s still got the constant attention of Lewt, but he won’t marry her. Eventually, she agrees to marry someone else, who Lewt kills because “she’s his girl,” which she agrees to because Jesse has found the woman he is going to marry. With Lewt on the run from the law, Laura Belle sick, and the senator still holding a grudge against Jesse, we need some resolution. Mostly, we need a showdown between Pearl and Lewt, which is how the film ends.

Duel in the Sun is a big, blustery film and not one that I enjoyed very much. It’s blatantly melodramatic and off-putting throughout. Only Jesse and Laura Belle are decent human beings of the main cast. Lewt is a complete shit and doesn’t try to hide it. The same is true of the senator, who is a racist bastard, mean to everyone who isn’t Lewt, and constantly demanding. As for Pearl, she’s so convinced that there is something terribly unclean about here that she deserves everything that happens to her. She’s also weak in that she hates Lewt but can’t resist him, even covering for him after he kills her fiancé.

As it happens, I don’t love Westerns in general. That said, I can name a ton of great Westerns. Duel in the Sun won’t make that list. It really wants to, though. There’s a great deal of ambition going on here. This was intended in many ways to be a new Gone with the Wind, but it’s not nearly sweeping enough or engaging enough. As much as I might dislike Scarlett O’Hara, she’s far more compelling a character than Pearl.

I’ll hand this to Jennifer Jones. At the very least, she’s very much not wooden in this film. She goes too far the other way, but at least she’s erring on the side of passion.

Ultimately, Duel in the Sun is far too long, far too melodramatic, and far too disappointing to care much about.

Why to watch Duel in the Sun: A great cast.
Why not to watch: It’s overblown, melodramatic, and too damn long.