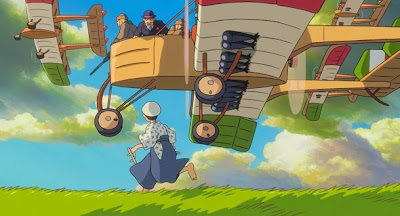 When the subject of film animation comes up, there are a few legendary names that are mentioned immediately. Walt Disney, Ralph Bakshi, Ray Harryhausen, and these days studios like Pixar and Aardman come to mind immediately. But perhaps no name is as well beloved by modern audiences for animation than that of Hayao Miyazaki, and with good reason. Miyazaki’s films are well loved for the same reasons that people love Pixar films. They are made not merely with care and passion, but with a genuine love of storytelling and a sense of wonder. Miyazaki’s announced retirement in 2013 upset a great number of people, which makes The Wind Rises, his last film, something special.

What soon becomes evident is that unlike Miyazaki’s previous films, The Wind Rises is only moderately based in the world of fantasy, and even here, the fantasy elements exist only in the dreams of the principle character. We begin with young Jiro Horikoshi (voiced in the American version by Joseph Gordon-Levitt) in the early part of the last century. Jiro wants nothing more than to be a pilot, but his poor vision and thick glasses prevent him from doing so. In his dreams, he converses with Italian airplane designer Caproni (Stanley Tucci), who tells him it is much better to create planes of true beauty than to fly them.

Again we fast-forward and Jiro is employed by Mitsubishi as an aircraft designer as is his friend Honjo (John Krasinski), both under the stern watch of Kurokawa (Martin Short), who makes a pretense of disliking his employees but who also always defends and trusts them. Eventually, Jiro and Honjo are sent to Germany to study aircraft manufacture under Junkers. When he returns to Japan, Jiro attempts a new design, but it fails. Sent to recover from this setback, Jiro again encounters Naoko and the two fall in love with each other, eventually with the approval of Naoko’s father (William H. Macy). Along the way, Jiro meets a man named Castorp (Werner Herzog), who assists the romance, but also puts Jiro in danger. Castorp is a German, but is fervently anti-Nazi, which makes Jiro’s association with him problematic.

The final act of the film concerns the doomed romance between Jiro and Naoko, doomed because she is suffering from tuberculosis, which at the time was incurable, as well as Jiro’s conflict between his desire to create beautiful aircraft and the use of those aircraft as weapons of war. Throughout the film, he continues to dream of Caproni, seeking advice, guidance, and at times something like moral absolution from his spiritual mentor.

The big difference between The Wind Rises and Miyazaki’s other films is evident—where his previous films were very much centered in a world of magic and demons and fantasy, The Wind Rises is almost entirely based in the real world. Those parts that aren’t are specifically the dreams of Jiro, and we are aware that these sequences are specifically dreams. This is important to me only in the sense that it offers an idea of just how important this story must have been to Miyazaki. He has significantly deviated in this respect from everything that brought him acclaim in the past. And yet, at its heart, the film is not so different from Miyazaki’s past work. It is, after all, a film about dreams, about achieving a particular goal, and about letting nothing come between the desired outcome and the reality of that outcome. It is in many ways more tragic than his other work, and less appropriate for children, who may find the story going over their heads.

But for all of that, everything that makes Miyazaki great is still here. This is a film filled with gorgeous animation and artwork for starters. Depicting something as ephemeral as the wind takes a certain talent, and in this film, we both see and feel the wind as it picks up in specific places. The wind, aside from the dreams, is the biggest connection to Miyazaki’s world of fantasy. Here, it is almost a character in and of itself, serving to inspire Jiro, to connect him to Naoko, and eventually to act as a sort of herald of important news and portents.

It may also be that The Wind Rises is Hayao Miyazaki’s most significant distillation of his personal philosophy. This is a man who was not present to receive the Oscar for Spirited Away because he did not want to set foot in a country currently engaged in bombing Iraq. His stance is reflected in the characters of Castorp, Caproni, and Jiro himself, all of whom see the beauty of the aircraft they are making but despair of the uses their machines are put to.

This is not the Miyazaki I expected, and I can imagine that many a Studio Ghibli fan wondered at such a real-world effort from a studio so bound in fantasy and wonder. The truth is that at its heart, the fantasy may not be present, but the sense of wonder certainly is. Hayao Miyazaki could have retired on any number of films, but this feels like an appropriate send-off for him. I have more of his films to watch, but even when he doesn’t present a world of monsters and magic, he still gives us a magic of a sort.

Why to watch The Wind Rises: It’s Miyazaki’s last film. You need another reason?
Why not to watch: It lacks the overt fantasy of his other works.