In truth, the Academy did a pretty decent job of nominating good original screenplays for 2006. The biggest miss for me is Stranger than Fiction, which would end in one of the top spots for me, gun to my head. Best Foreign Language Film winner The Lives of Others feels like a significant miss as well. I think a case could be made for Inside Man as well, since this is a very tightly designed story that is realized beautifully. The two movies that would never get nominated but that I enjoy are Slither and Talladega Nights, neither of which really deserved a nomination. Other than that, I’ve got nothing—the other films I’d love to mention had screenplays adapted from other sources. 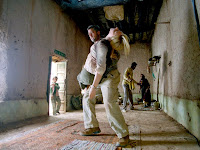 5: Based on what I’ve seen of other blog reviews and comments here, I like Babel more than a lot of people. The biggest plus the screenplay has going for it is that it holds together despite its complexity. The biggest negative is that same complexity, at least in my opinion. It feels like Babel earned a nomination specifically because it holds together across all of its stories, but that also seems like that is the job of the screenplay. Why should it be rewarded for simply being competent?

4: There’s a lot to like about The Queen, and I’d include the screenplay in that. The issue I have with it is that an argument could be easily made that this is more of a television movie than a theatrical release. The performances are the real sell for The Queen and a big part of that comes from the screenplay. Still, of all the scripts, even Babel, which I’ve rated lower, this one feels like it might not belong. I like what it offers, but even with a larger-than-life subject, it feels too small.

3: Winner Little Miss Sunshine boasts a fine script and I enjoyed this tremendously when I first saw it. This is a film that hasn’t held up for me over time, though. I didn’t like it nearly as much on a rewatch as I did seeing it in the theater the first time around. That may be because comedies often have difficulty holding up through repeated viewings. Whatever the reason, the lack of staying power is a knock on the film for me, a fact that lends some credence to the idea that Oscars shouldn’t be awarded for a few years to determine how well things hold up over time.

2: The biggest strength of Letters from Iwo Jima’s screenplay is that it humanizes people who were, at the time, enemies of everything this country claims to stand for. It could be argued that this task is made easier with the distance of 60 years, but that doesn’t change the fact that the film does this admirably. It would be easy to caricature the characters and the situations either positively or negatively, but Letters from Iwo Jima is nuanced. It also holds up. This would have been a solid choice for Oscar.

1: Bluntly, Pan’s Labyrinth should have won. A larger part of this film creates a completely new world that works as something entirely internally consistent. A single slip here and there and the whole thing tumbles down like a house of cards, and it doesn’t. The fantasy elements of this film are beautifully realized and completely consistent. Even more, the entire thing works in the real world as well, and the two stories function as their own parts of the story and also as comments on each other. It’s a wonderful screenplay and perfectly realized, and it should have won.