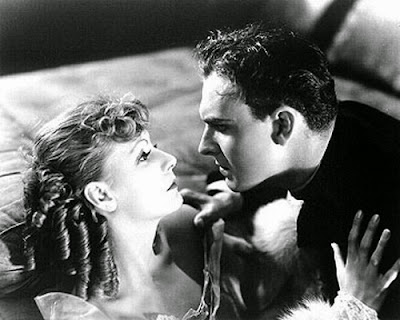 The early years of the Oscars tend to plague me not because I have trouble watching the films but because I have trouble locating them in general. Turner Classic Movies proves to be invaluable in locating some of the films from the first couple of years, and my DVR is a testament to this. With the DVR nearing capacity, though, I thought it was high time to get a few films out of the way to make room for what is coming in the next few months. Since those early years are a problem, Romance from 1930 made sense. It didn’t hurt that this was one of the shortest films I had on the entire Oscar list.

Romance is one of those movies that is told almost entirely in flashback. Young Harry (Elliott Nugent), the sone of a wealthy family, plans to marry an actress despite the social problems that this will cause and the embarrassment his family will suffer. He is granted an audience with his grandfather Thomas Armstrong (Gavin Gordon), expecting that this will be a long tirade against his impending marriage. Grandfather Tom, after all, is a minister and appears to have a reputation for demanding a high moral code from his relatives. And, after all, actresses don’t have the purest reputation.

What follows is Tom Armstrong’s flashback to his youth almost 50 years previous. As a young man, he is introduced to Rita Cavallini (Greta Garbo), an opera singer with a checkered past. Specifically, that checkered past comes with her current affair with a man named Cornelius Van Tuyl (Lewis Stone), who is close to twice her age. Rita and Cornelius are definitely a poorly-kept secret, although Tom has no knowledge of their frequent trysts.

Instead, Tom becomes infatuated with Rita, and this is evidently reciprocal. It’s not long before Tom is thinking marriage despite what his family might think about his becoming involved with an opera singer. It’s not until he discovers the truth of the relationship between his friend and the woman he loves that Tom becomes distraught. The end of this story is the closure of this relationship, which ends in a way that is actually sort of unexpected.

Romance is an odd film in a number of respects. On the one hand, it’s not really long enough to build up a lot of steam, so it feels like short shrift in a lot of respects. On the other hand, pretty much everything we need to know about what’s going to happen has happened in the first 45 minutes and the last half hour of the film is just waiting to get back to the opening scene and the final advice that Grandfather Tom is going to give to Harry. I’ll admit that the ultimate conclusion is one that is far more interesting than I predicted, but once we know we’re going to have that confrontation, it takes too long to get there.

This is absolutely a film that needs to be watched through the lens of it being from the 1930s as much as possible. It is not one that translates to the modern age well at all. The acting is extremely over the top and melodramatic. Garbo, who is the real draw here, is in full-blown Ninotchka mode here. I actually like a number of Garbo films. When she was allowed to act without trying to emote her way through the screen she was capable of real greatness. That’s simply not the case here. In Romance, we’re supposed to almost literally feel everything she feels, and she lays it on thick.

This is an interesting movie for a number of reasons, but it’s not one that I feel the need to watch again. I put a lot of that on the fact that talkies were still new and so many of the conventions in this era still came from the silent films of a few years earlier. There are films of this year that have managed to maintain their importance and their greatness through the years. Romance is not one of them.

If you’re a Garbo fan, this is worth the time to watch. There’s plenty of good scenes with her and plenty of her pining for a man that she doesn’t think she deserves. If Garbo is nothing special to you, though, neither is Romance.

Why to watch Romance: Garbo, naturally.
Why not to watch: It’s not that interesting.