This is the twelfth in a monthly series of reviews suggested by Nick Jobe of YourFace. 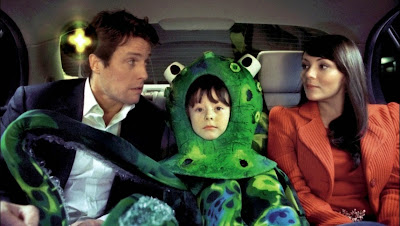 Love Actually bills itself as the ultimate romantic comedy. Everytime ad copy or promotional materials use the word “ultimate,” a part of me hopes its used in the sense of “last one ever.” Rom-coms aren’t my favorite genre of film, mostly because they end up being formulaic. They aren’t generally so much about what ending we’re going to get, but how we’re going to get to the ending we want. Good rom-coms are worth seeking out, and I’ve heard enough good about Love Actually that I was hopeful.

I’m not going to do my typical summary for this one, though, because there’s just too damn much. There are nine or ten intertwined plots here, with connections that go from story to story. It’s complicated enough that the Wikipedia write-up contains a flow chart that manages to get a couple of the connections wrong. There are a couple of main stories and a larger number of secondary, or at least smaller ones that aren’t as central to the various major narratives.

In the main, Love Actually succeeds in giving the audience what it wants. Most of the stories have happy endings, although the film is smart enough not to have its potentially romantic couples bat 1.000. A few of them have downbeat ends, which adds a touch of realism to a genre not generally noted for being too realistic. For a wonder, though, I tended to like the stories that had the goofy and happy rom-com endings more than the downers, although there’s an exception or two here.

Rather than a plot summary, I’ve decided to rank the nine stories from favorite to least favorite. I’m going to use the actors’ names instead of character names just for the sake of simplicity.

1) Bill Nighy as an aging pop start looking to make a comeback with a cheesy Christmas song. He figures out that his life is pretty barren and realizes by the end who the true love of his life is. It’s awesome because Bill Nighy’s character is the most entertaining person in the film, bar none.
2) Newly-elected Prime Minister Hugh Grant finds himself attracted to his assistant Martine McCutcheon and stands up to American President Billy Bob Thornton in defense of her. It’s cute, and it’s the sort of thing Hugh Grant is meant to play.
3) Movie stand-ins Martin Freeman and Joanna Page meet on a film set while standing in for sex scenes. They’re perfectly comfortable with each other while naked and simulating sex but shy with each other everywhere else. It’s very sweet, and the film could have stood a lot more of them.
4) Colin Firth discovers his girlfriend cheating on him with his brother and goes to France. There he meets Sienna Guillory, his Portuguese-speaking housekeeper, who he falls for despite the language barrier. This one ends in the grand rom-com gesture, but it’s damn good.
5) Liam Neeson and son Thomas Sangster mourn the death of their wife and mother. The boy then reveals he has a crush on a girl in school and comes up with a way to make her notice him. This one would be higher except it not only succumbs to a grand rom-com gesture, it dips wholly into rom-com cliché territory.
6) Kris Marshall leaves England for America in search of sex. He finds it by walking into what is essentially a porn set and ends up returning to England with Shannon Elizabeth. It’s mildly funny, but also broad caricature, so it didn’t really grab me.
7) Alan Rickman is married to a sort of frigid Emma Thompson, who happens to be Hugh Grant’s sister. Heike Makatsch, Rickman’s employee, makes overt sexual overtones to him, and he buys her an expensive Christmas gift, which Emma Thompson finds out about, putting their marriage in trouble. This one just never held together for me. I didn’t buy it when Rickman’s character started looking to stray, so it all hung together poorly.
8) Laura Linney is madly in love with co-worker Rodrigo Santoro. They finally start to hook up, but the evening is spoiled by constant phone calls from her mentally ill brother Michael Fitzgerald. I get the failed relationship part of this, but it seems awfully shallow on the part of Rodrigo Santoro’s character.
9) Last and least, Keira Knightley and Chiwetel Ejiofor get married. Ejiofor’s best friend Andrew Lincoln has always been cold to Knightley, but it’s because he’s in love with her and not because he dislikes her. He admits this to her in a pure cheese moment. Parts of this one felt kind of creepy, and it loses a lot of points for criminally underusing Chiwetel Ejiofor, who is much better than his five minutes or so on screen. Also, in a slightly different context, the behavior exhibited here isn’t romantic but creepy and stalkerish.

There’s a lot to like with this film, but it’s simply too busy. I get what it’s going for and it succeeds in many cases, but even the stories that get the most play are still too short and I want more of them. In a perfect world, I’d cut three or four stories and expand the ones left. A couple of the stories—the one with Alan Rickman and Emma Thompson in particular—would be a lot better with more space to play out. Still, I can see why a lot of people have made this a holiday tradition.

I liked this pretty well. Based on the ranking above, I liked about half the stories and didn’t like about half, but the ones I liked I liked a lot. The ones I didn’t like had potential that wasn’t fulfilled in general except the last couple. I’ll call this a win. Nick, you finish the year at 9.5 out of 12, which is a pretty solid year.

Why to watch Love Actually: Most of the stories are good.
Why not to watch: A couple of them aren’t.

Posted by SJHoneywell at 4:13 PM