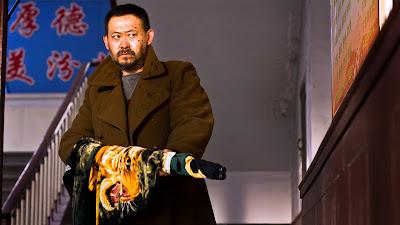 I’m not precisely sure how to react to Tian Zhu Ding (A Touch of Sin). It is, essentially, a drama anthology, which makes it sort of a rare beast. The four stories we are given here are evidently ripped from the headlines of Chinese newspapers. While not interconnected by anything but the tiniest of threads, the four stories all concern life in the new, capitalist China. More specifically, the stories deal with people who have been pushed to the margins in this new society. In each case, our protagonists are driven to violence of one sort or another.

The film opens with a man driving a motorcycle down a lonely highway. He is accosted by a trio of men holding axes and demanding money. The man takes out a pistol and shoots all three before driving away. Soon after, he passes a wrecked truck being observed by the police and, at least temporarily, drives out of our consideration.

The first main story deals with a man named Dahai (Jiang Wu), who is dealing with his own poverty in full view of two men who sold collective property of their village and reaped enormous profits. The original deal, we are told, is that a large portion of those profits are to go to the village and the people, but instead, the people remain poor while these two men get rich. Dahai tries to confront one (who is now wealthy enough to afford his own private jet), and is severely beaten for his trouble, then paid off to stop causing trouble. Eventually fed up, Dahai wraps his shotgun in a print of a tiger and goes on a rampage against everyone who has wronged him.

The second story concerns the man from the opening scene who gunned down the three axe-wielding thugs. This is Zhou San (Wang Baoqiang), who has returned home for a New Year’s celebration. No one seems to be especially pleased to see him back home. He seems to be a natural criminal and to be fascinated with his pistol. For no evident reason, he kills a couple in broad daylight, stealing the woman’s purse and then vanishing, eventually leaving the home province entirely.

The third story picks up from the bus that Zhou San took out of town. Xiao Yu (Zhao Tao) works in a sauna and is having an affair with a married man. As we pick up this story, She meets her married lover at a travel stop and gives him an ultimatum—either he stays with his wife and gives Xiao up or he divorces his wife. She gives him six months and, despite his protestations and desire for her to travel with him, she does not. Importantly, his bag is checked and a knife is found, one that he cannot take on the train, so Xiao claims it. Based on the sudden and surprising violence of the first two segments, it is not much of a surprise when Xiao puts the knife to disturbing use.

In the fourth story, Xiao Hui (Luo Lanshan) causes an accident in the factory he works in. When it is decided that his punishment will be to give his pay to the injured workman until that workman returns, he leaves and ends up working as a bouncer/waiter/gofer in a brothel where he falls for one of the prostitutes, but leaves when he cannot stand to see her with customers. Eventually, Xiao’s past catches up with him and his monetary woes pile up, making the final part of his story inevitable. This is the least violent of the four stories, but is the most tragic.

What all four of the stories have in common is the suddenness of the violence. There is no build up to what happens, or at least not much of a build. We can see in some cases what is going to become inevitable, we can feel the building tension and frustration of the characters, but even with this, the violence happens so suddenly as to be shocking. Because of this, it’s also surprisingly realistic. Violence, sudden and terrible, strikes at any time and no one is immune from it.

Tian Zhu Ding feels like growing pains, like China has started to enter a brave new world but many of its people are unable to adjust and are lost in the shuffle. This is the story of four such people who in a country with more than 1.25 billion people are easily lost, never missed, and quickly replaced.

While it is our main characters in the four stories who commit the acts of violence, in two of the cases, the film is careful to have us sympathize with the characters in question. This is the biggest weakness of the fourth story—we don’t really get a complete sense of why the story happens the way it does. There is a sense of finality to it, but the terrible despair obviously felt by Xiao isn’t given enough room to breathe and it feels rushed and incomplete. The second story, that gives us a vicious killer as a protagonist suffers from the same issue; there’s nothing here with which we can sympathize.

The first and third stories, though, are as good and as interesting as they can be. These are stories that resonate fully, and the frustration of the characters easily crosses national, political, and gender lines. Despite the acts they commit, these are characters about whom we care.

There is something like a resolution for the third story at the end of the film, and certainly finality to the last story. The first two, though, simply end without giving us a solid conclusion. I haven’t decided if I like that or take issue with it. It might be a little of both. I want something to wrap up the stories, but most stories in the real world don’t end; they just reach a temporary stopping place and then pick up again.

I’m not ready to say that A Touch of Sin was a film that I enjoyed watching, but it is an impressive piece of work. The camera is brilliant here, and there are definite callbacks to other films throughout, particularly the classic martial arts films of the ‘70s and ‘80s. There are connections between these characters who are doomed to their own sad worlds and the characters of those films who act out of a sense of honor and nobility. While not an easy watch and mildly frustrating about the lack of connections between the four stories, this is a film worth seeing.

Why to watch Tian Zhu Ding: Tales of modern China.
Why not to watch: These stories are filled with sudden, terrible violence.