Film: The Informer
Format: DVD from NetFlix on laptop. 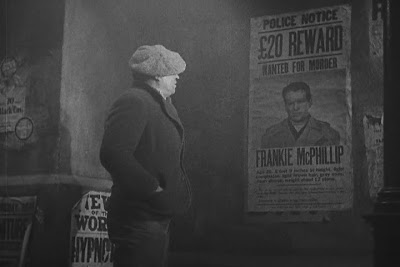 Every now and then, I run across a film that I struggle mightily to understand. That’s absolutely the case with The Informer. The story itself isn’t that difficult to understand. But for a movie as short as this one is (it clocks in at just a touch over 90 minutes), there doesn’t seem to be nearly enough story to fill the time. It’s so simple, in fact, that I kind of don’t understand why it wasn’t over at the 40-minute mark.

Gypo Nolan (Victor McLaglen, who beat most of the cast of Mutiny on the Bounty to win the Oscar) is a down-on-his-luck Irishman. He’s down on his luck because several months earlier, he was summarily dismissed from the Irish Sinn Fein rebels for refusing to kill a man in cold blood. Since that time, he has lived from hand to mouth. He sees a wanted poster for his old friend Frankie McPhillip (Wallace Ford) with a 20-pound reward. As it happens, he also runs into his streetwalking girlfriend Katie (Margot Grahame), who is “looking for work” since she’s also out of money and owes on her rent. As it happens, the reward money for turning in Frankie is exactly the amount needed to get both Gypo and Katie to America.

So, Gypo does what comes naturally to him: he turns in Frankie to the British and collects the reward. Frankie is killed when the police attempt to catch him, and Gypo is unceremoniously dumped out the back of the station. He’s got his money. Sadly, Gypo is too stupid to do anything other than fulfill his most immediate desires. That means that once the money is in his hands, he blows it on booze, food, and even hands it out to people who need it.

Of course, the members of the IRA who are now missing their friend Frankie wonder where rock-stupid Gypo has managed to come up with a handful of loot. It doesn’t take a mathematician to add two and two, and so eventually, Gypo is going to run afoul of his old gang. His cause isn’t helped by his own stupidity nor his massive drunkenness, which causes him to all but admit to turning in his friend for the reward money at every opportunity.

And that’s pretty much it. Fifteen minutes in, and it’s evident where the film is going and tht there can really only be one way for it to end. The film becomes an exercise in inevitability. For a modern audience, the fact that the ending is inevitable means that a good two-thirds of this film is frustrating. We know where we’re going to end up, and it all seems kind of silly that it appears to take everyone else to long to figure it out, since Gypo seems both all but unable to keep himself from confessing and simultaneously convinced that everyone who obviously disbelieves him thinks he’s telling the truth. When the IRA finally drag him in for a trial, there’s a good 20 minutes or so to go. I was left wondering how much could possibly happen aside from the inevitable.

I’m unfamiliar with Victor McLaglen in general, although based on this performance, I don’t doubt that he played this kind of character fairly frequently. He’s a massive brute of a man, at least as depicted here with hands the size of canned hams. Based on the era of the film, the amount of melodrama here isn’t too surprising. Beyond that, McLaglen is good. He overplays his confusion sometimes, or at least plays it as it would in a comedy these days, half saying something and then correcting himself, obviously trying to think of lies on the spot. The difference is that here at least the people he’s doing this to aren’t dumbed down by the script to fall for it. In a way, that’s almost kind of refreshing.

Despite McLaglen’s performance, this is a difficult film to recommend. In spite of its relatively brief running time, it’s far too long for the story it wants to tell and has to jump through a number of hoops to get us to the obvious and only conclusion possible. A lot of the time spent watching this is spent waiting for the next step we know is going to happen and wondering why it’s taking so long.

The Informer is not a bad film by any stretch, but it’s not one that holds much interest. It’s well acted for what it is, but there’s just not enough story here nor is Gypo Nolan enough of a character to sustain interest.

Why to watch The Informer: A very strange and interesting story.
Why not to watch: Your main character is almost literally rock stupid.

Posted by SJHoneywell at 7:26 PM