Hanging on in Quiet Desperation

Films: About Schmidt
Format: DVD from personal collection on laptop. 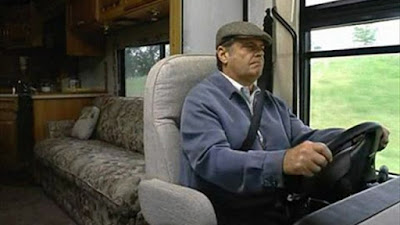 About Schmidt has been sitting on my shelf for several years, picked up at a garage sale or library sale, or something like that. The box is covered with half-removed stickers from three or four different places. I got it only because it was something I knew I’d have to watch eventually, and it’s always a good thing to make the process a little easier whenever I can. Seriously, it feels like I spend almost as much time looking for movies as I do watching them, so even one that is relatively easy to find that no longer needs to be found is a good thing.

This is an Alexander Payne film, and I’ve liked or at least appreciated all of the Payne films I’ve seen to this point. In that respect, I had solid expectations. It’s also a movie that star Jack Nicholson, and that’s worth mentioning at the top. I have said multiple times in the past that I really enjoy it when an actor plays against his or her type. Watching Tom Cruise or Albert Brooks play a villain (Collateral and Drive respectively) is something I find endlessly interesting. And that’s the case with Nicholson here. We’ll get to that by the end, since it’s Nicholson’s performance that caused me to watch.

Warren Schmidt (Nicholson) retires from his life-long job as an actuary for an Omaha-based insurance company as the film begins. He wakes up the morning after his retirement dinner and realizes that he doesn’t know what to do with his life or really even who he is. He finds that he resents just about everything his wife Helen (June Squibb) does. His daughter Jeannie (Hope Davis) is about to be married to a waterbed salesman named Randall Hertzel (Dermot Mulroney) of whom Schmidt has a low opinion. One day on a whim he decides to sponsor a third-world child, and when the packet of information arrives, he accompanies his monthly check with a long, rambling letter about his life.

These letters will become a theme through the film. As Warren Schmidt goes through his retirement, he finds that letters to his foster child in Africa become an outlet for his frustration and loneliness, something that increases exponentially when Helen dies suddenly from a blood clot in her brain. Now adrift, Schmidt finds no real meaning or purpose to his life. He’s not wanted back at his old office and discovers that his carefully boxed files and research have been moved out to the dumpster to be carted away.

Thus, much of the movie is Warren’s search for meaning. There’s an important distinction here in what he’s looking for. He’s not specifically looking for a meaning to give his life. He’s looking instead for the meaning that his life may have had, and he’s having trouble finding it. With nothing better to do with his time, he sets off in the Winnebago he and Helen purchased, heading to Denver for Jeannie’s wedding several weeks before the event despite Jeannie wanting him to stay home until the ceremony and also despite his vast misgivings over the marriage in the first place.

So were does About Schmidt place tonally? It’s tragi-comic and also firmly rooted in absurdism, the sort of film that Luis Bunuel would make if he’d been born half a century later. Up to this point in his life, Schmidt had never considered meaning or purpose to his life or really much of anything beyond what was right in front of him. There was his job and there was his marriage, and there was his daughter, and all of those things slipped away from him without him really noticing that they had until one day he realized he was adrift and without purpose.

In that respect, this is an existentialist tragedy, a man who has realized that his life has been lived for nothing and to no purpose. And yet there is a good deal of humor here. It’s black comedy to be sure, but comedy just the same.

And that brings me to Jack Nicholson, who made not just his career but his entire public persona based on the idea that he was an outsider and a rebel. Over and over again, his most interesting roles place him as a person who shakes up the mainstream or simply walks outside of it, not always rebelling purposefully, but often simply forging his own path by his own force of will. Warren Schmidt is the opposite in a lot of ways. This is a man who spent his entire life coloring within the lines only to discover that it’s gotten him nothing that he can really call his own, not even ownership of his own soul.

Kathy Bates, who plays Randall’s mother Roberta was also nominated (in a supporting role in her case), and is a nearly perfect counterpoint to Warren Schmidt. Roberta is very much her own person, doing whatever she wants and living a Bohemian lifestyle because that’s what she wants to do. Bates is almost always a joy and she is here, too. I also love the casting of Howard Hesseman as her ex-husband Larry, but that’s at least in part because I generally like Howard Hesseman.

There’s a poignancy to the film that is masked by the extreme nature of Warren’s tribulations. That extreme nature—nothing beyond the realm of believability but sort of a constant, mid-grade craziness—is necessary to highlight the entire point of the film. Warren’s existential crisis is real, and that is something worth considering. What is the man worth, and what has the man accomplished worth accomplishing? Farce highlights that, and if the film bleeds a little too far over the line, well, excess in this case is a victimless crime.

Why to watch About Schmidt: These are questions that most of us will face someday.
Why not to watch: The dip into farce is necessary, but a bit extreme.