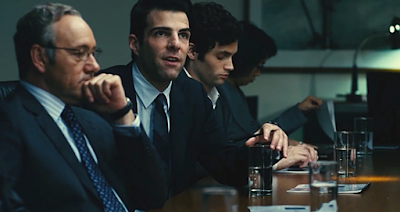 I don’t pretend to understand financial markets. Watching the financial markets collapse a decade ago affected me less than it did a lot of other people because I don’t tend to play in markets, but it was scary nonetheless. For those of us who don’t work on Wall Street, the greatest frustration of the destruction of the housing market was probably the fact that virtually no one who caused the problem suffered any real consequences, or at least suffered the consequences that we thought they should have. Margin Call tells this story with the sort of cold dispassion that it seems to require.

Margin Call takes place over two consecutive days at an unnamed trading firm that seems to have been based on Lehman Brothers. The film starts with a huge percentage of the staff on one floor being let go. Included in that culling is Eric Dale (Stanley Tucci), who works in risk management. Eric tells the people who are letting him go that he’s been working on something that he’d like to finish. They send him off anyway, and on his way out, he hands a flash drive to Peter Sullivan (Zachary Quinto), telling him to finish his work and to be careful.

Peter works through the evening and finishes up the work and discovers that the company’s position on mortgage-backed securities has become extremely volatile. In fact, the situation has become so dire that should the company’s assets drop by 25%, the losses will exceed the value of the entire company. Peter brings in his co-worker Seth Bregman (Penn Badgley) and their boss Will Emerson (Paul Bettany) to explain the situation to them. Will then contacts his boss Sam Rogers (Kevin Spacey), who returns, despite the late hour.

The situation is so dire, in fact, that even higher-ranking bosses are brought in, including Jared Cohen (Simon Baker), in charge of capital markets; Sarah Robertson (Demi Moore), in charge of risk management; and another analyst named Ramesh Shah (Aasif Mandvi). Eventually, a full meeting of the company’s board is called, headed by CEO John Tuld (Jeremy Irons). The decision is made to dump the company’s entire position in these assets to clear them from their books. This decision is made to essentially save the company despite the fact that it will generate a huge loss, likely bankrupt several other companies, and likely ruin the firm’s reputation so badly that no one will want to trade with them in the future.

The biggest problem with Margin Call is, honestly, the subject matter. While vast fortunes are always interesting, and it’s always fascinating to watch people go down in flames for their own greed and stupidity, watching people decide to sell assets isn’t on its face that interesting. Margin Call overcomes this by essentially having each scene filmed as if everyone involved is currently planning an assault on an enemy fortress. Everyone on the screen is fighting for his or her survival, and everyone knows that everything they are doing is the sort of toxic action that will allow them to survive for the day but will also destroy their career.

What I find particularly interesting is the star power involved here. It’s cast perfectly, but I have to wonder about the influence that had to be used to assemble this cast for first-time director (and also the screenwriter) J.C. Chandor. Having either Jeremy Irons or Demi Moore or Kevin Spacey or Stanley Tucci would be the sort of thing to excite any first-timer, but to get all of them? It’s a little bit astonishing. While all are well-cast, I think it’s Kevin Spacey who would be the hardest to replace. Spacey handles certain roles just about perfectly. No one does sneering contempt quite like him, and few can summon the sort of full-bodied disgust that he can.

There are naturally a number of similarities to a film like The Big Short, which followed this by a half-decade. While the subject matter is almost identical, the tone is completely different. The Big Short is almost comic in places while still being terrifying. Margin Call is a war movie, with bullets replaced by dollars and anti-aircraft being replaced by layoffs. Make no mistake: this is a film about nothing more than a number of heartless, grasping people doing everything they can to make as much money as they can, damn the human cost.

It’s grim. It should be grim. The dialogue moves along at a rapid pace and, despite being about insane financial maneuvers, it’s actually not that hard to follow or understand (even if my understanding is incomplete). It’s grimmer to realize that no one seems to have learned anything from what happened and it’s likely that it will happen again, just as seriously or worse, and almost certainly before the next decade is out. And once again, the people who will make the problem will not be the people who suffer its consequences.

Margin Call is scary, and it is because it’s the real world.

Why to watch Margin Call: Money makes things interesting.
Why not to watch: How much do you like knowing that the people who destroyed the financial markets didn’t pay for it?