Happy Endings Only in Songs

Film: Pennies from Heaven
Format: DVD from NetFlix on laptop. 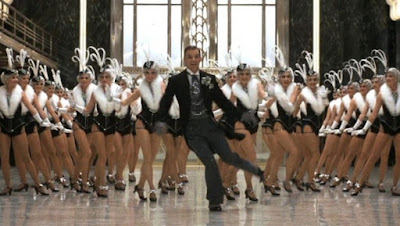 When you think of musicals in general, you think of happy and fluffy. At least I do. Sure, there are some that go against that trend: West Side Story, Oklahoma, The Umbrellas of Cherbourg, but most of them shoot for the happy ending and pure entertainment from start to finish. That’s what I was expecting with Pennies from Heaven. It’s not at all what I got, though. In fact, Pennies from Heaven is tonally very close to a film like The Purple Rose of Cairo.

Arthur Parker (Steve Martin) is a sheet music salesman around Chicago during the Great Depression. Sales aren’t good and worse for him, his wife Joan (Jessica Harper) is frigid and unaffectionate. Arthur would like to own a store that sells records, but Joan will not loan him the money she’s inherited from her father. In fact, she won’t even let him borrow from the bank using that money as collateral. This is Arthur’s reality, but in his head, everything in his world is perfect, just like the lyrics of the songs he sells.

While out on a business trip, Arthur encounters Eileen (Bernadette Peters), a school teacher. He’s immediately smitten with her, worms his way into her life, lies to her, and gets her pregnant before running out on her and returning to his wife. Joan is relieved enough to see him return that she willingly gives him access to her inheritance for his record store. Eileen, pregnant and unmarried in the Great Depression, loses her job as a schoolteacher and is kicked out of her house by her family. She winds up in Chicago where she encounters a pimp named Tom (Christopher Walken), who arranges an abortion for her and adds her to his stable.

Eventually, Arthur and Eileen meet up again and run off together. This is where what had to this point been a secondary plot involving a homeless accordion player (Vernel Bagneris) and a blind girl (Eliska Krupka). It’s here, in fact that I have my only real problem with Pennies from Heaven.

The main conceit in Pennies from Heaven is the difference between the world that the characters live in and the one that lives in their heads and in the songs. Okay, there’s a bigger conceit here—the actors don’t actually sing. Instead, they lip synch to classic records from the period. It’s a little jarring at first, but it works. The dancing actually is real, though. Steve Martin allegedly spent six months learning how to tap. Bernadette Peters is a long-time Broadway veteran, and Christopher Walken started out as a dancer. What this means is that the dancing is pretty good; it’s better than I thought it would be.

But, as I say, there’s a subplot involving an accordion player, who Arthur helps out at one point and a blind girl who he meets and who the accordion player later encounters tragically. I didn’t think this aspect of the film worked. It made for an ending that became too pat for me, one that gave us something “deserved” even if the movie didn’t really earn it.

Pennies from Heaven was a massive box office flop, and I understand exactly why it was. I can only imagine that crowds of people showed up to see a movie that they expected would be a feel-good throwback to the classic Astaire/Rogers movies of the ‘30s. What they got instead was a brutal, depressing film where people’s lives fall apart horribly while they are fed songs that tell them everything is wonderful and easy. No one likes hearing that. No one really likes to be told that the dream that they’ve been sold for so long in movies and songs and on television is of the pipe variety. But that is the film’s central thesis. The reality is terrible and dark and ugly. When the musical numbers happen, everything is bright and beautiful and everyone is smiling.

Here’s the thing. I’d be comfortable with saying that a lot of people are going to dislike the film, and I’m okay with that. In fact, I’m completely okay with being more or less on my own with thinking that it’s brilliant in a truly subversive way. I don’t love everything about it, but I think it does a lot of things right.

One of the things it does right is the casting. Martin is an unusual choice, since the world knew him only as a comedian in 1981 and Pennies from Heaven was his second major movie role. But Martin works. There’s an everyman quality about him that makes Arthur Real. Seeing Jessica Harper still looking like she’s walked off the Suspiria set is fun, too. But it’s Bernadette Peters who steals the movie and every scene she’s in. Peters often has a ditzy, bubblehead persona in her roles, one she sometimes calls on here, but there are moments here where it’s clear that she is a tremendous talent, capable of communicating deep emotions with a glance or a gesture.

I think it’s also very interesting that the real signature musical number of the film goes not the Martin or Peters or even Walken (although his dance number is a true highlight), but Vernel Bagneris dancing to the title track.

This is a weird movie, and one that it’s difficult to recommend, but for those who can get past its oddities and where its heart truly lies, it’s one that is absolutely worth your time.

Why to watch Pennies from Heaven: The last of the old-school MGM musicals.
Why not to watch: It’s really not the movie you expect.