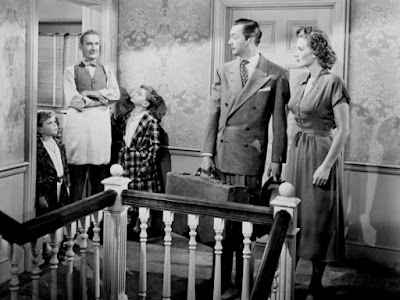 From 1985 to 1990, there was a sitcom called Mr. Belvedere that featured a cultured English gentleman acting as a live-in nanny/servant for a typical American family. It ran for six seasons and is one of many television shows that featured a male caretaker of children. It, however, had a much better place from which to start, since the show was based on Sitting Pretty and its two sequels. Sitting Pretty features a typical American family in desperate need of a maid/nanny who, through a few miscommunications, end up hiring Lynn Belvedere (Clifton Webb) to take care of their children and help around the house.

That miscommunication is wrapped up in Belvedere’s first name. Harry (Robert Young) and Tacey King (Maureen O’Hara) are desperate for help with their three rambunctious boys and large dog when their current maid walks out. Tacey places an ad that is answered by Lynn Belvedere, who she assumes is a woman. When Lynn Belvedere arrives, wackiness ensues. Harry is keen to get rid of the man immediately, but Belvedere proves his competence quite quickly and within a day, the three children are quiet, polite, and well-behaved.

Of course, it’s mildly scandalous and Belvedere is prickly to a fault. He has a stony exterior that seems to protect an equally stony interior, but he is effective in what he does. He’s also secretive, changing the lock on his bedroom door and apparently an expert in just about everything that comes up. The real scandal happens when Harry is called out of town on business (he’s a lawyer) for a few days. Realizing that his wife has become Belvedere’s biggest fan, he is unwilling to go until Tacey agrees to spend each night with her friend Edna Philby (Louise Allbritton) and her husband Bill (John Russell), one of Harry’s coworkers. When the middle child wakes up with a stomachache one night and Tacey rushes home, nosey, gossipy neighbor Clarence Appleton (Richard Haydn) arrives to find Tacey and Belvedere in bedclothes and Belvedere holding a bottle of gin (which is actually water).

Rumors spread because that is precisely who Clarence Appleton has been demonstrated to be. The scandal threatens Harry’s job because his boss, Horatio Hammond (Ed Begley) admits no scandal into his office. When later, Tacey and Belvedere are seen dancing together (again by Clarence Appleton and again through a series of circumstances), the scandal breaks again, Harry loses his job, and Bill gets fired for defending him. And then the truth is revealed: Lynn Belvedere has been writing a novel about all of the scandals in the neighborhood, essentially naming all of the names and dishing all of the dirt on everyone around.

So there’s a lot to take on with Sitting Pretty. We need to work on the assumption that Lynn Belvedere is essentially the perfect human being. He’s Jeeves with a literary bent, knows everything and how to do everything and always has the right answer for every problem. However, it’s a small piece of willing disbelief to make to enjoy the film itself. Sitting Pretty contains a lot of nice details that demonstrate the characters through their actions—it’s good writing that we know exactly who Clarence Appleton and his mother are in the first few minutes simply from a little dialogue with a taxi driver and seeing his mother desperately peering out her windows at her neighbors’ houses with binoculars.

Yeah, it’s silly and doesn’t really follow anything like reality, but it’s a lot of fun and genuinely funny in places. In fact, the one thing I have trouble with is the presence of Robert Young, who may be the blandest leading man in Hollywood history. He is unflavored gelatin, American cheese slices on untoasted white bread. He makes Franchot Tone and Leslie Howard look robust.

However, he kind of works because of this in the film. Seriously, who could blame Maureen O’Hara for wanting a little something-something on the side with Clifton Webb when she’s married to Robert Young? Give her a more distinguished and interesting leading man here, and the rumors would be a lot harder to believe. Hell, I’d believe that she’d be looking elsewhere for love if she were my neighbor and married to a man with all the charisma of a glass of room temperature tap water.

The truth, though, is this is all about Clifton Webb. Webb inhabits the role of Lynn Belvedere completely, and while the situation is ridiculous and the plot is a bit silly, he never seems to be anything other than the man the film demands that he be. He’s funny without mugging for the camera. The fact that he is constantly deadly serious, never even cracking a smile, is a large part of what makes him and the film work as well as it does.

Sitting Pretty won’t change your life, but at a scant 83 minutes or so, it won’t take up much of your time and you’ll enjoy watching it. And if that’s not enough reason, know that in many ways this is the movie that launched an entire slew of television sitcoms and a few dozen closely-related tropes.

Why to watch Sitting Pretty: Clifton Webb is the ur-version of male nannies.
Why not to watch: Robert Young is the blandest human being to be in film.

Posted by SJHoneywell at 3:24 PM