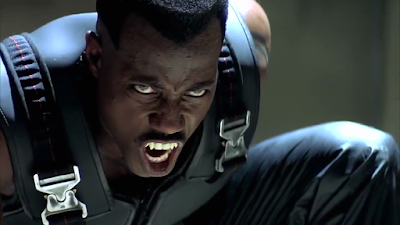 I remember when it was first announced that Ant Man was going to be turned into a movie, allegedly with Edgar Wright directing. I’ve since seen Ant Man and it was okay, but hardly the movie it could have been, since it was tied into the Marvel Comics Universe. The reason for my initial excitement was that Marvel had previously made a few movies based on properties that they really didn’t care much about. One of those was Blade.

Blade isn’t a great movie. It might honestly not even be a good movie, and it’s certainly a case where the first sequel was better than the original film. What it is, though, is a really fun and entertaining movie. Blade is only marginally a horror movie in that there are a couple of gory moments and the main antagonists are vampires. What it really is is an action movie where Wesley Snipes gets to kill a shit-ton of vampires with a variety of weapons. Oh, there’s plenty of stuff that doesn’t work in the movie and a lot of things that defy all sorts of logic. But it’s hard not to be entertained by martial arts battles with swords and general ass-kicking.

Essentially, the world is covertly run by vampires, who work behind the scenes and feed carefully on the human population to prevent themselves from being discovered. An up-and-coming vampire named Deacon Frost (Stephen Dorff) wants to change all of that. What he wants is for the vampires to rule the world openly, a move that the vampire council thinks is stupid. What Frost really wants, though, is to enact an ancient vampire prophecy that will turn him into a god and allow him to roam around in the daylight.

Enter our hero, Blade (Wesley Snipes). Blade’s backstory is that his mother was bitten while she was pregnant with him. This means that he was born with most of the powers that vampires have—strength, speed, durability—and none of their weaknesses. He does have the thirst for blood, but counters it with a specially-concocted serum that prevents him from feeding on people. Also, since vampires killed his mother and turned him into what he is, Blade fights an unending war against the vampires with the assistant of his mentor/weapons guy Whistler (Kris Kristofferson).

That’s basically the plot. There’s more, of course. Blade busts up a few vampire clubs, gets a lead on Deacon Frost and his minions Quinn (Donal Logue) and Mercury (Arly Jover) and hunts them down. He’s reluctantly assisted by Dr. Karen Jenson (N’Bushe Wright) who is bitten in an early attack and also happens to be a hematologist. Lucky break, that. Meanwhile, Frost and his crew attempt to decode ancient vampire sigils that show the process for creating the vampire god La Magra, who will not only have incredible power, but will be able to walk in daylight. Not so coincidentally, one of the key ingredients for that is the blood of a daywalker, Blade being the only one known. And, of course, he works against the vampire council, headed by Dragonetti (Udo Kier).

Like I said, Blade is only marginally a horror movie, because the entire thing is set up to alternate between scenes that move the plot forward and scenes that involve Wesley Snipes engaging in massive martial arts-style battles against hordes of vampires. While he’s terribly outnumbered, the vampires in the Blade-verse have some serious weaknesses that give Blade a tremendous advantage. He says at one point that vampires are allergic to silver. That’s true if in the same sense humans are “allergic” to hydrochloric acid. The touch of silver causes them to burst into flame and turn into ash in a matter of moments. They’re also susceptible to garlic and sunlight, which also kills them in spectacular fashion. So, while there are plenty of vampires to kill, Blade is armed with silver stakes, a silver boomerang-type weapon, and submachine guns that fire silver-laced and garlic-loaded bullets. What this means is that lots and lots of vampires get skeletonized and turned to powder in spectacular fashion at regular intervals.

Look, I’m not going to pretend that Wesley Snipes isn’t exactly the right style of badass to play Blade. He’s actually pretty damn perfect casting for the role, and the fight scenes are really well-choreographed. Since these are the main sell of the movie, it’s a damn good thing that they’re worth watching. I do wonder why he doesn’t put a bit of silver on his katana, though, since he uses that weapon quite a bit, and the parts he hacks off vampires evidently grow back eventually.

The other thing is that a great deal of the fight scenes appear to be designed specifically to start, end, or at least offer moments where Snipes can pose in comic book-style poses. Sure, it looks cool; it just doesn’t make a great deal of sense. And yeah, this is a movie where a half-vampire dude attacks hordes of vampires trying to make a blood-drenched god, but still, verisimilitude is always a good thing.

But hey, Blade is a lot of fun. It’s kind of mindless and I have a really hard time accepting Stephen Dorff as a badass vampire, but it’s really difficult not to be entertained by this from start to finish. Yeah, it’s dumb, but it’s the good kind of dumb, and yeah, it’s silly, but it’s the right kind of silly.

That said, if you’re only going to watch one Blade movie, watch the sequel; it’s better.

Why to watch Blade: It’s fun.
Why not to watch: It involves a great deal of Wesley Snipes posing.