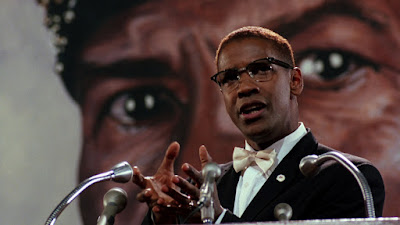 For a long time, I’ve said that my favorite Spike Lee movie is Do the Right Thing. I like the questions it raises, and I like even more the fact that rather than answering them, it just asks more questions. It’s a movie that creates conversation rather than trying to end one, and I respect the hell out of the decisions that Lee made with it. A number of people have told me that my opinion is based on the fact that I hadn’t yet seen Malcolm X. Well, now I have. I think I still like Do the Right Thing better, but I completely understand why I needed to see this.

As with any biopic, there are going to be things here that going to deviate from the truth. However, I also think that’s less of an issue with this film than it is with many others. Much of this comes from the fact that Lee came under a great deal of fire while filming from many people who were concerned that he would damage the story of Malcolm X in some way, or focus too much on negatives. Interestingly, this was exactly the same criticism that forced Norman Jewison off the project years earlier. So, while I’m certain there are some amalgamated characters and scenes created for dramatic purposes, I’m also pretty convinced that Lee stuck to the truth as much as he could.

Running just over 200 minutes, Malcolm X is epic in length, but it’s also epic in terms of the story it tells. The film is divided essentially into thirds. The first third concerns the life of Malcolm Little (Denzel Washington) before his entry into the Nation of Islam. In this part of his life, he was a criminal and a drug abuser, and, contrary to the social norms of the time, dated a white woman (Kate Vernon). Eventually, he and his partner in crime, Shorty (director Spike Lee) are busted and sent to prison for 10 years despite the fact that his white accomplices got much shorter sentences for the same crimes. While I think this section is necessary for understanding the man, this is also the part of the film that I thought dragged the most. It felt longer than it needed to be.

The second part of the film concerns Malcolm’s conversion to Islam directed by fellow inmate Baines (Albert Hall). Malcolm is eventually released from prison and becomes important in the Nation of Islam movement, acting in many ways as the main preacher for Nation of Islam founder and inspiration Elijah Muhammed (Al Freeman Jr.). It is during this period that Malcolm changes his name to Malcolm X and meets Betty Shabazz (Angela Bassett), who he eventually marries. As his star rises, he discovers a number of things about the Nation of Islam that he finds distasteful. Specifically, h learns that many of the other higher-ups are profiting nicely from what they do and that Elijah Muhammad himself has been named in several paternity suits.

The final part of the film concerns Malcolm’s departure from the nation of Islam, his pilgrimage to Mecca, and his realization and eventual repudiation of many of the tenets of Nation of Islam philosophy. Specifically, he rejected the idea of total segregation, discovering in Mecca that Muslims come in many different skin tones. This section also concerns the harassment that he received, some (but unlikely all) of which certainly came from the Nation of Islam.

So let’s talk first about the performance for which I watched this film. Denzel Washington was rightly nominated for Best Actor for this film. It’s also worth noting that his screen time makes this the longest Best Actor performance in Best Actor history. The truth is that I like Denzel Washington pretty much every time I see him on the screen. He’s one of those actors who is almost always immediately likable or at least sympathetic. It’s a rare talent. But as much as I like Washington, it’s a film like Malcolm X that reveals just how powerful he can be in a role. He is magnetic here, and it quickly becomes clear that while pure charisma is a part of what makes him such a watchable star, the man has an incredible depth of skill as an actor. There is never a sense here that Washington hasn’t committed fully to the role, whether that be in his early zoot suit-wearing days or having fully absorbed the doctrines of Nation of Islam philosophy.

I also like the fact that Spike Lee had the gravitas at the time to get good actors in small roles. Delroy Lindo shows up as a criminal with whom Malcolm works early on. Peter Boyle shows up for a cup of coffee as a cop. Hell, Al Sharpton appears in this film as a street preacher, and Nelson Mandela shows up as a school teacher. Ossie Davis does some voiceover work at the end. It’s a deep, huge cast, and it all works together well.

What’s harder for me is figuring out how, as a white man, to react to this film. It’s interesting, though, because I imagine in many ways it is similar to what it must have been like to be black and see only racist portrayals on the screen for years. Nation of Islam isn’t particularly kind in its philosophy to anyone of my complexion, and having characters have serious conversations about how all white people are devils is, frankly uncomfortable. But it’s also a real conversation, and my discomfort of hearing someone say that is far less important than having that accurately depicted on the screen.

What Malcolm X does especially well, though, is humanize the man behind the story. Malcolm X was killed before I was born, and Martin Luther King Jr. was killed before I turned 1. I don’t remember either of them as living figures. However, as a kid, King was held up as a figure of peace and a man to be admired. Malcolm X was scary; he was the militant black man, the sort of man who had followers who were extremists and potentially dangerous. Malcolm X doesn’t shy away from that rhetoric in the middle of the film, but it also doesn’t hide the fact that he grew away from those beliefs. It makes him less a scary figure from the past and shows him to be the important voice of American civil rights that he should have been recognized as years ago.

Hell of a film, and a hell of a performance. I certainly get why people consider this Lee’s best film, even if I’m still going to stick with Do the Right Thing.

Why to watch Malcolm X: If you ever had doubts about Denzel Washington as an actor, look no further.
Why not to watch: The first third feels too long.