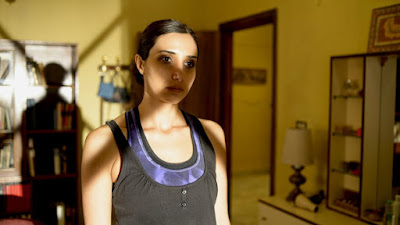 How do you deal with a slow burn? For me, it’s something that has to be done carefully. Move too slowly and you lose your audience. Move too quickly, and, well, it’s not really a slow burn. Horror movies are really the best genre for a good slow burn. The trick is to give us an opening that sets up our real world and then, piece by piece removes that normality. Under the Shadow, an Iranian horror film, does this surprisingly well.

Under the Shadow takes place during the 1980s during the Iran-Iraq War. Shideh (Narges Rashidi) is a former medical student who, because of her radical political activity years earlier, is prevented from returning to school. She lives with her husband Iraj (Bobby Naderi) and her young daughter Dorsa (Avin Manshadi). Iraj, who is a doctor, is called to the front to treat wounded. Because Iraq has promised to bomb Tehran to the ground, he wants her to leave the city and go to his parents’ home. She refuses, claiming that she does not feel welcome there.

The war comes home to Shideh and Dorsa when a missile strikes their building but does not explode. Shideh, who does have medical training, is called upstairs to another tenant’s apartment because her father has had a heart attack. The man dies, and the neighbor tells Shideh that her father was fine when the missile crashed through their apartment. The heart attack he suffered happened after the missile struck. Her father, she claims, looks like he saw a ghost.

Several other things happen around this same time. Dorsa claims that a young orphaned boy who has moved in with neighbors has whispered a charm to her to ward off evil spirits, specifically djinn. This is despite those neighbors claiming that the boy is mute. When the attack happens, Dorsa’s favorite doll Kimia goes missing.

The missing doll may not seem important, but Shideh, who seems to be a skeptic in most things, is told of the legend of djinn, air spirits that can possess the living by taking small items of personal value and hiding them. Through these items, the djinn gain access to the living people. Slowly, the other people in the apartment building start leaving Tehran for safer places, ultimately leaving Shideh and Dorsa alone in the building. Dorsa, suffering from a fever, refuses to leave without her doll. And both Shideh and Dorsa begin having terrible dreams and even some waking moments of apparitions, including a ghostly chador.

Make no mistake here; Under the Shadow is very much a slow burn movie. There are moments of disturbing things, flashes of movement in the distance or on the corner of the screen. It’s not until we’re pretty close to the end that things really ramp up quickly and up the ante for the scares. It’s worth noting that Under the Shadow is a debut effort from director Babak Anvari, who shows a surprising maturity here in a lot of what he does. There are a couple of solid jump scares in the film, but he doesn’t rely on them, spending much more time slowly building tension in the situation and by creating a real sense of atmosphere and place. There is a sense of danger and oppression here that comes both from the potential haunting of Shideh and Dorsa, and also from the Iranian society’s rules and the war itself.

It would be high praise indeed for me to compare this with a movie like The Devil’s Backbone, but there are some real similarities here. The danger and constant threat of the war seems to complement the supernatural threat in a lot of ways. The two are parallel in a lot of ways, serving almost as analogies of each other.

There are a few nice effects in the film as well, but the movie doesn’t overuse them. Rather than putting us in the middle of CGI effects that never look as good as anything practical, the movie downplays having a lot of effects going on, opting instead for creating an atmosphere of dread and danger. It’s effective, and another reminder that when the slow burn is done well, it’s worth seeing.

I’m impressed also because Under the Shadow doesn’t overstay its welcome. The film is a spare 83 or so minutes, giving us enough for the set up and a blistering final 10-15 minutes before the credits roll. If this is what Babak Anvari can do in his first film, I’m very interested to see what he can do in the future. If I have any advice for him, tone down the shaky cam. It's useful in places, but long stretches of it are frustrating and make the film look cheap.

Why to watch Under the Shadow: The horror of other countries is always potentially interesting.
Why not to watch: Overused shaky-cam.