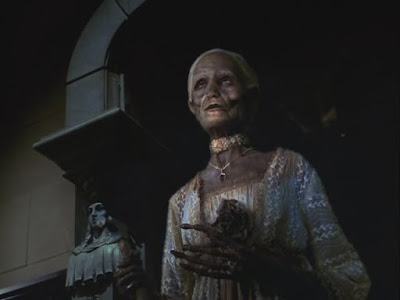 Sometimes what you really want is a good haunted house story. The classic of the genre, of course, is The Haunting. Rose Red (sometimes called Stephen King’s Rose Red) is a reasonable facsimile, since it’s based in no small part on Shirley Jackson’s classic. It’s got some similarities to The Shining as well, although much more to the novel than the film. It is truly a classic haunted house,

It’s hard not to see this in a directly line from The Haunting through The Shining with a little bit of Carrie thrown in as well. The backstory on the house is that this is a fictional version of the Winchester Mystery House where the owner decided that she had to continue adding on and adding on to stay alive. This is definitely a case where the house was born bad. The body count claimed by the house clocks in at around a couple dozen, and this is with it being unlived in for years and completely abandoned for a few years beyond that.

Much like The Haunting, we have a researcher named Joyce Reardon (Nancy Travis) who wants to prove that a variety of psychic abilities actually exist. While her classes at the local university in Seattle appear to be popular, she’s a laughing stock and an embarrassment with the administration. In fact, her superior (David Dukes) is actively conspiring to have her tenure revoked and employs a student reporter named Kevin Bollinger (Jimmi Simpson) to start writing muckraking articles about her.

The reason is that Professor Reardon is planning a psychic-filled expedition to Rose Red, the legendary house that has caused so many deaths. Coming along for the trip is her current friend with benefits, Steve Rimbauer (Matt Keeslar); there’s some pretty good evidence that the only reason they’re sharing a bed is that he needs the money she’s paying him and that she’s paying him because he’s the owner of Rose Red. Also invited along are people with a variety of sixth sense-style talents. These psychics are an older precognitive with a heart condition named Vic Kandinsky (Kevin Tighe); a woman who specializes in automatic writing named Cathy Kramer (Judith Ivey); Emery Waterman (Matt Ross), a man able to sense past histories and who is dominated by his spendthrift mother; Pam Asbury (Emily Deschanel), a woman who can sense the histories of objects; Nick Hardaway (Julian Sands), a telepath; and her prize attendee, Annie Wheaton (Kimberly J. Brown), another telepath with telekinetic abilities. Annie is also severely autistic and is attended by her sister Rachel (Melanie Lynsky).

Rose Red was written as a made-for-television miniseries, which accounts for its substantial length. It also accounts for the frequent what-would-be drops to commercial throughout. The fact that this is a television miniseries is both a strength and a weakness of Rose Red. It allows for a much fuller experience. We get more on the characters, for instance, and more about the history of the house. It also means that this is essentially PG-13 and that the budget is clearly a made-for-television budget in terms of many of the special effects. Actually, some of them aren’t bad, but a lot of them are very clearly CGI in the early stages of CGI.

Because Rose Red is basically The Haunting on steroids, things start happening immediately. Even before the research team arrives, our journalist student arrives to set up for more opportunities to embarrass the professor and is quickly murdered by the house. Once the team sets up inside, though, the house “wakes up” completely and starts doing a number of interesting things. Rooms move, doors open to new areas, spirits appear, machinery goes crazy. In fact, we get everything you’d expect except for clanking chains. Eventually, Professor Reardon’s boss shows up, as does Emery’s awful mother (Laura Kenney). Paranormal events, some of them deadly, happen at a constant rate.

And that’s really the biggest problem with Rose Red. The people who come to research the house have distinct, specific, and what would be truly terrifying events happen to them on a regular basis. Emery wakes up to the animated corpse of an actress who disappeared in the house lying in bed with him. Cathy is attacked by something moving under the floor. And they stay. In the middle of the film, with one person in the group clearly dead (and in fact lying just outside of the window where people are talking) and other missing, seen as an apparition and thus presumed dead…everyone stays. They have normal conversations. They know they are clearly in danger, and they stay anyway.

In fact, at one point while all of the surviving members of the group are sitting in a room, knowing they are literally trapped inside the house and worrying about what to do next, one of the characters gets up and walks out because she wants a glass of iced tea. To get this, she has to leave the group, wander in an obviously haunted house by herself through corridors that have more than once changed, shifted, or otherwise moved, and do this while the power is out. For tea. I mean, I like tea, but I don’t like it that much.

Because Rose Red is more than four hours long, there’s too much for a plot summary. Really, the first episode is the set up, the second ups the ante and starts killing off the party, and the third kills off a few more characters and gets us to the conclusion. In that sense, it’s slow to start, but builds up pretty quickly. There are also a few ghost characters. The one the story wants us to care about is the house’s original owner Ellen Rimbauer (Julia Campbell). The one I cared the most about, though, is Sukeena (Tsidii Leloka), since she has the most expressive eyes I have seen on anyone in a couple of years. Evidently, Leloka is much more a stage actress, which is kind of a shame, since she’s great on camera.

Rose Red isn’t bad. There are some genuinely creepy and scary moments here, even with the obvious effects. I can’t help but think this would have worked better as a book, though—there’d be more chance to make the characters’ motivation to stay a lot sounder. And frankly, the effects in my head would be better than what’s on the screen.

Why to watch Rose Red: A classic haunted house tale.
Why not to watch: The effects don’t work as well as they should and the characters aren’t very bright.