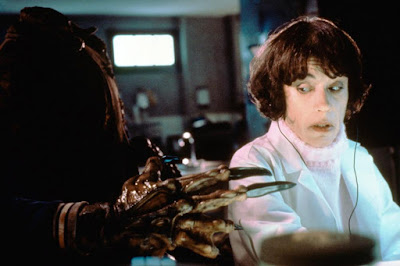 Strap in, folks. This is going to be interesting.

I do try to give each movie I watch a fair shot, but I had literally no real hopes for The Borrower. The fact that it was directed by John McNaugton as the film following Henry: Portrait of a Serial Killer did not fill me with hope. There were several reasons for this. First, this movie has not managed to show up on the They Shoot Zombies, Don’t They list of 1000 best-reviewed horror movies. That puts it as less than a lot of really shitty movies. Second, the top-billed actor is Rae Dawn Chong. Not even the potential awesomeness of having Antonio Fargas in the cast can counteract that.

Here’s the simple, basic story. An alien who is apparently an alien serial killer, has been “devolved” into a human as punishment. No matter that these critters are clearly not genetically related to anything on Earth and evolution doesn’t work that way. Since killin’ is too good for this alien, he’s going to be dropped off on Earth (thanks, aliens!) as punishment. He arrives on earth, attacks the guy that dropped him off here, and then decides to attack a couple of rednecks who are hunting nearby. Our alien friend was warned that certain things could cause him physical distortions, and, right on cue, his head literally explodes. But hey, no problem, since this doesn’t kill him. Instead, he rips off one of the redneck’s heads and plants it on his now-vacant neck and wanders off into the wider world.

Meanwhile, finest member of Whateversville police, Diana Pierce (Rae Dawn Chong) gets a lead on violent criminal Scully (Neil Giuntoli) when she literally spots him coming out of a convenience store. She tries to arrest him, and the citizens of Whateversville seem to blithely wander past while a cop has a gun drawn on a perp, allowing him to capture a hostage. Of course she finally captures him and he gets sent to the hospital, thanks to the bullet she put into his leg.

And that’s pretty much all I’m going to say about plot. Seriously. Scully escapes and there’s a head-switching alien on the loose. Think they’ll meet up at some point and the alien will take Scully’s head? Think that Officer Dawn Chong will kill the alien and get revenge on Scully?

So let’s talk about what makes this movie complete and utter shit, and it is complete and utter shit. Literally the only way this movie works at all in any capacity is for literally every single character in the film to have suffered severe head trauma. I don’t mean the main characters. I mean literally every person in this movie had to have a concussion or some sort of cerebral contusion for any of this shit to function.

How about some examples?

* The alien, currently wearing Antonio Fargas’s head, is walking around a hospital. Our man Antonio was clearly a homeless person, and he is literally wandering hospital corridors, trying to break out of emergency exits and slamming into filing cabinets. None of the hospital staff walking by notice this.
* In that same hospital, Fargas/alien wanders in on a doctor and his nurse doing the nasty. The alien is literally covered in blood and has a massive, bleeding wound circling his neck. The doctor asks the nurse to leave and proceeds to ask the alien, who at this point can no longer talk, what’s wrong. The alien is grunting as his only form of communication, and the doctor does not request any help.
* I’ve already mentioned officer Dawn Chong’s inability to shoo away the public while she is holding a gun on a dangerous felon.
* Early on, our alien wanders into the road and is hit by a car. That car’s driver then puts him into her passenger seat and drives him to a hospital, repeatedly asking him if he is okay. Since he can’t figure out how to put on sunglasses, he clearly is not okay, but this doesn’t stop her constant litany of stupid comments and her not really seeming to understand that she hit a dude with her car.

* It’s not just the characters who are incompetent, though. In a moment of staggering stupidity, a female cop is assaulted by a handcuffed Scully. He molests her and strips her (no nudity) and puts on her uniform. This includes her bra. And yes, the uniform fits him.
* Remember, the alien only switches heads with its victim. Somehow, though, when the alien takes Antonio Fargas’s head, the rest of him becomes black, too. And when he then takes the doctor’s body, the rest of him magically becomes white again.

Seriously, this is a dumb movie. It hurts, how stupid this movie really is. Literally the only part of this I enjoyed was when the alien, temporarily posing as a doctor, kills a dog and puts its head on the human body. That was pretty great.

The sad truth is that this is essentially a remake of The Hidden. The problem is that The Hidden is a better movie in literally every way possible. Even the body switch into the dog is recycled from the earlier film. If you want to see a movie about a body-switching alien, watch that one; it’s great. This one is shit.

Why to watch The Borrower: At one point, the alien puts a dog head on a human body.
Why not to watch: Every character in this movie is literally brain damaged. That’s the only explanation.