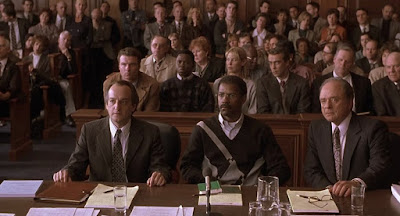 As the list of Oscar movies I still have to get through starts to wind down, I realize there are movies I’ve avoided for a bunch of different reasons. Length for a few, lack of interest for others. With The Hurricane, I’ve stayed away for a very different reason. I remember when the movie was released, and while I also remember that Denzel Washington’s performance was widely praised, What I also recall was that the biggest knock against the film was that it was economical with sticking with the actual facts.

So let’s look at the film first, then the history. The Hurricane tells the story of Rubin “Hurricane” Carter (Denzel Washington), an up-and-coming middleweight boxer convicted of three murders in Patterson, NJ during the Civil Rights Era. Carter spent nearly 20 years in prison for crimes that both he and the film say he didn’t commit. The timeline of the film naturally goes back and forth. We’ll get some of Carter’s fights and some of his youth as well as a great deal of his time in prison.

There is a second story here running through the film as well. This secondary story concerns young Lesra Martin (Vicellous Reon Shannon). Lesra, a New Yorker, lives in Canada more or less as the ward of Lisa (Deborah Kara Unger), Sam (Liev Schreiber) and Terry (John Hannah). Lesra has come to live with them because he has ambitions to someday go to college. However, despite his age, he is unable to read. The idea is that they can help him in ways that his parents can’t. Lesra, learning to read, comes across Carter’s book and becomes engrossed in it. When he finishes, he makes it his mission to get Carter released from prison.

Much of the early part of the narrative pits Carter against a local police officer named Della Pesca (Dan Hedaya). Della Pesca, based on an incident that happened when Carter was 11, decides that Carter is a criminal and will do anything he can to get him behind bars. This incident sends Carter to juvenile detention, something that more or less turns him into a boxer. Upon his release, he joins the army, then returns home. Back home, he meets Thelma (Debbi Morgan), and is immediately busted by Della Pesca and sent to prison.

We get a little bit of Carter’s boxing career, including a title fight against Joey Giardello (Ben Hernandez Bray). This is where I start to have issues with the film. In the movie, Carter clearly wins the fight easily, but, due to the racism inherent in the boxing world as everywhere else, the unanimous decision goes to Giardello. In reality, Giardello sued the film’s producers since this scene made him look incompetent. Evidently, it was so clear that Giardello won the real fight that even Carter himself admits it, and Norman Jewison had to include something to this effect on the commentary track.

Eventually, Lesra and his guardians become involved in Carter’s case and move down to the U.S. to make sure it gets reopened. Through their efforts and those of his lawyers Myron (David Paymer) and Leon (Harris Yulin), they eventually get the case reopened in a federal court, enduring threats from Della Pesca and obstruction from virtually everyone involved in the case.

One of the biggest bright spots of The Hurricane is the exceptional cast. In addition to the many actors already named, Clancy Brown plays a prison guard—something he’d done before, although this time in a much more sympathetic role. Rod Steiger shows up as the federal judge who eventually rules on Carter’s appeal. Hell of a cast, but evidently you can do that when you’re Norman Jewison.

That said, and while there are solid performances all the way around, The Hurricane is a showcase for Denzel Washington. Given good and compelling material, Denzel Washington has been one of the best actors around, and it’s hard for this story not to be compelling in many respects. Washington plays quiet dignity well, and he does righteous indignation well. He’s tiven a chance to do both here for nearly 2 ½ hours, and as is often the case, he is magnetic on screen.

And so, I’m left with a bit of a quandary when it comes to The Hurricane. As a movie, it’s very good, and infuriating the way a movie wreathed in racism is going to be. As a piece of history, though, it has a lot for which it needs to answer.

Why to watch The Hurricane: Denzel Washington once again demonstrating why he’s worth watching.
Why not to watch: History? What’s that?