Film: The Blind Side
Format: DVD from Sycamore Public Library on laptop. 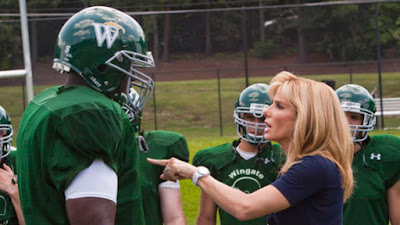 I should probably start this by stating that I’ve never been entirely sure of the talents of Sandra Bullock. I don’t dislike her, but I think she makes a lot of bad choices. She makes some damn good ones, too; Gravity comes to mind as being not only outside of what seems like her wheelhouse but one in which she excelled. So I’ve backburnered The Blind Side for some time now, knowing that I’d get to it eventually. Well, it’s eventually.

Chances are good that you know the story already. This is a classic rags-to-riches tale with a dash of either Great Expectations or Pygmalion thrown in for good measure. That it’s based on a true story gives it some street cred and that it involves America’s actual pastime of football means that it’s got the sort of mass appeal that makes movies a hit. It’s also the movie that earned Sandra Bullock a Best Actress Oscar, a hurdle I’ll jump over sometime in the future.

The film starts with a man attempting to get his son into a religion-based high school in Tennessee, and wanting to get another young man he calls Big Mike (Quinton Aaron) enrolled as well despite not being his parent or guardian. Big Mike is Michael Oher, a kid who has essentially been abandoned by his family, lost in the system, and more or less takes care of himself. His grades don’t warrant him coming close to being enrolled in the school, but the football coach (Ray McKinnon) pushes for it with the admittedly ulterior motive of wanting him to play football eventually. However, he realizes that Michael’s terrible grades won’t allow him to play, but he suggests that it would be the correct thing to give him a chance.

Now enrolled, Michael’s path crosses that of the Tuohy family. Initially, the Tuohys take an interest in Michael because he’s a kid that obviously needs help. The first one to really embrace him is SJ (Jae Head), who is young and pretty guileless. Second is mother Leigh Anne (Bullock), who immediately becomes a mother figure to Michael and assumes parental responsibility for him. Michael is also quickly accepted by Leigh Anne’s husband Sean (Tim McGraw) and daughter Collins (Lily Collins).

What follows is a story that is more episodic than I expected. We’re presented with a problem and the problem is overcome. We’re presented with another problem, and the problem is overcome. Michael needs to improve his grades, so a tutor (Kathy Bates) is hired to push him. Michael doesn’t understand what he needs to do to perform on the football field, so Leigh Anne gives him a pep talk, equating the rest of the football team to his family, which turns him into an offensive line powerhouse. Michael commits to Ole Miss (the alma mater of both Tuohys) and is investigated by the NCAA, but says the right things.

I find The Blind Side a difficult film to judge in a lot of respects. On the one hand, it really is a good and compelling story. Michael Oher is a big kid with a talent who was given an opportunity and made the most of it. He escaped the projects in Memphis and eventually wound up a first-round NFL draft pick and owns a Super Bowl ring. It’s hard not to find that story interesting on some level, even for someone like me who doesn’t honestly give a crap about sportsball in any of its varieties.

And yet, the racial politics in the movie are odd to say the least. On the surface, I understand this being a nice story about people who go out of their way to help someone who is an exceptional talent. But below the surface, there are some potentially ugly racial issues. Michael, black and poor, is rescued from a short life of crime and drugs by a white family that is unbelievably wealthy; they own dozens of fast food restaurants and have an income that would probably dwarf that of my entire block. The wealthy white people swoop in to play savior for the po’ black kid, dodging thinly-veiled racial comments from friends and acquaintances along the way.

Playing into that is Michael’s meekness depicted in the film. Is the real Michael Oher that passive? Since he was evidently cited for misdemeanor assault earlier this year, I find that difficult to believe. That passiveness plays into the racial aspects of the film as well. Michael is essentially helpless until the white folks come to rescue him.

That’s certainly not intended, and it’s hard to complain about given that the movie was at least partly based in reality (although Oher complained that he actually knew how to play football before he was essentially pushed into playing). But it’s there, and it’s hard not to see.

As for Sandra Bullock, she’s good. But I don’t like Leigh Anne Tuohy as depicted here. I’m totally fine for someone to go mama bear when it’s warranted, but she’s the type of dance mom who seems to expect everyone else to play by the rules except for her. That’s not an attitude that flies very far with me. The rules apply to everyone, special people included, and dance moms (and football moms) included as well.

Eh, I don’t know. I didn’t hate it, but it’s not one that’s going to rank for me in terms of favorite sports movies or even favorite football movies.

Why to watch The Blind Side: There's an uplifting story here.
Why not to watch: There's also some weird race stuff going on.