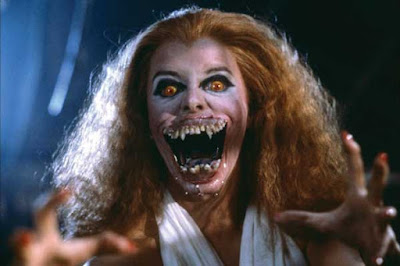 While it’s probably not the first one, Fright Night from 1985 is the first time I can remember watching a vampire film where the idea that vampires actually exist and everyone knows they don’t is considered a significant part of the plot. Like I said, I’m sure there are others and earlier ones, but I think this is the first film I saw where that was important. There’s a lot to like in Fright Night, and when it showed up through interlibrary loan, I was excited to watch it again, since it’s been years.

The story is pretty simple when it comes to vampire films. A young man named Charley Brewster (William Ragsdale) is a relatively normal high school kid who has a girlfriend named Amy (Amanda Bearse) and a fascination with old horror movies, particularly those shown on late night television by former horror actor-turned-local crappy movie host/Vincent Price stand-in Peter Vincent (Roddy McDowell). Someone new moves in next door to the Brewsters, and even on that first night Charley gets a sense that there’s something odd going on. While Amy is prepared to offer sex, Charley is busy watching his new neighbors, Jerry Dandridge (Chris Sarandon) and his “roommate” Billy Cole (Jonathan Stark) move a coffin into the basement.

The next day, Charley sees what can only be described as a prostitute show up at the neighbor’s house. The following day, when Amy tries to apologize for their earlier spat, Charley sees the same woman’s picture on the news as a murder victim. He later sees another girl in the house and sees Dandridge about to feed—fangs, long fingernails, and all. Convinced that there is something going on, Charley contacts the police, who naturally don’t believe him. Desperate, Charley reaches out to the only people he thinks might be able to help. The first is his friend “Evil” Ed (Stephen Geoffreys), who is more obsessed with old horror movies than Charley is. The second is Peter Vincent himself, who has just been fired from the television station.

Eventually, Amy and Evil convince Peter Vincent to prove to Charley that Dandridge isn’t a vampire. This is done by pretending to have Dandridge drink holy water, which is really just tap water. However, as he is leaving, Peter Vincent gets a look at the room behind him in a mirror and discovers that, like the classic vampire, Jerry Dandridge casts no reflection. Throw in the trope that Amy looks exactly like Jerry’s lost love from centuries past, and the rest of the movie essentially writes itself.

There’s a lot of good stuff going on in Fright Night, and while the movie isn’t a perfect one, a great deal of it really works well. One thing it does well is give us characters that act in believable ways given the situation of the story. Evil is one of my favorite horror movie characters because he’s one of the few characters that is really written to be believably what he is—a high school outcast and geek. He’s annoying, but it’s hard not to like him at least a little bit and to ultimately feel sorry for him.

Another thing that Fright Night does well is the practical makeup effects. The vampire effects are particularly good. The vampires we have here are truly monstrous, and they look great, especially the few that Dandridge creates during the course of the film. I like all of the performances here, too. Roddy McDowell walks a very careful line in the role of Peter Vincent. It would have been very easy to be too restrained and thus not believable. It would have been just as easy to play him constantly flamboyant. Instead, McDowell plays him as a faded actor trying to hang on to what little glory he has and trying his best not to let the cracks show. It’s the sort of role he was meant to play, and he’s perfect in it. He and Sarandon are absolutely the best things in the film—Sarandon is equal parts menace and suave, terrible and wonderfully sexual for a predatory vampire.

If there is a failing here, it’s that Fright Night wants to be a lot of things and can’t quite pull them all off. It wants to be a horror movie, a teen romance, a comedy, and even a bit of a commentary on vampire movies and the genre, and it’s not quite enough. There are some good scare moments, but except for a jump scare or two, it’s not that scary. It wants to be a romance, but the relationship between Charley and Amy (and eventually between Amy and Jerry Dandridge) isn’t explored enough. There are some good comedy moments, but not enough of them to call this a comedy.

So, while it may not be everything it wants to be, it still gets a lot right. Fright Night is good fun. I had as much fun watching it this time as I remembered having in the past. Some of that might be nostalgia, but most of it is that Fright Night is a well-made film that works well in the entirety of the vampire mythos.

Why to watch Fright Night (1985): It’s considered a cult classic for a reason.
Why not to watch: It’s not quite comedic enough to hit all the comedy notes it attempts.